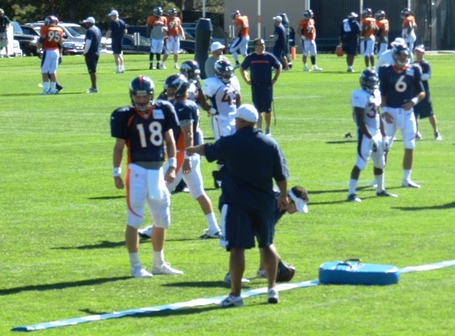 Continuing where we left off in part 1, a breeze was blowing (for a few minutes only, I assure you) and the Quarterbacks, Tight Ends and Wide Receivers were going through passing drills. Then the HORN blew.

After a short water break, the Tight Ends moved off to hit the sled and the Defensive Backs joined the rest of the passing drill to go up against the Wide receivers one on one. This is one of the better matchups in any Broncos practice. The competitive level rises and pride becomes an issue. The tilt begins with Eric decker matched up against Champ Bailey. Peyton Manning gets the ball to Decker and he makes the catch with great concentration. Peyton’s next pass is intended for Brandon Stokely, but Chris Harris breaks it up. Caleb Hanie has a pass to Andre Caldwell broken up by Tony Carter.

Brock Osweiler attempts a pass to Tyler Grisham that Omar Bolden intercepts. Joshua Moore maintains good inside position to deny a completion. Eric Decker wins another round against Champ Bailey breaking toward the ball on a comeback route.

The catch of the day came next as Manning threw the ball towards a streaking Matthew Willis, who was being mirrored by Tracy Porter. Matt slipped in the middle of his break, but still manged to haul in the pass while on his back. The next receiver to run a route on that side slipped too.

Greg Orton made a catch against Drayton Florence and about that time, the quote of the day I referred to in the quick hits post was made, "Ain’t no Holding in Practice."

Peyton Manning connects with Demaryius Thomas for a touchdown against Omar Bolden. Decker makes a catch over Chris Harris and Manning hits Matt Willis in front of Tracy Porter.

Brandon Stokely shows that despite recently turning 36, he still some gas in the tank. Mark Dell gets denied by Champ Bailey and then Omar Biolden picks off Caleb Hanie. HORN.

Back to the 11 on 11’s. Willis McGahee tries to get around the corner on the right side and Rahim Moore puts an audible hit on the veteran Running Back. That gets the crowd going again. Lance Ball gets a pair of carries and then McGahee gets through a hole on the left side.

Jeremiah Johnson uses some good vision and gets a few yards on a toss right. Ronnie Hillman gets stuffed on his first attempt up the middle. It’s nice to see a wall of Defensive Linemen. Hillman tries to change direction on his next carry, but the Defense wins that battle as well.

Mario Fannin has better luck from a single back set. Chris Gronkowski comes in to lead block for Fannin’s next carry. The play makes positive yardage and Jeremy Beal ends up on his back.

Ronnie Hillman shows some success around the left side, gaining the corner and getting upfield against the 2nd string Defense. Xavier Omon gets a pair of carries and lays a hit on Joshua Moore on his second rushing attempt. Hillman gets another carry for a minimal gain. HORN.

The Offense and Defense switch sides and directions. The new Line of Scrimmage becomes the 25 yard line to my right. 7 on 7 passing with the 1st teamers. Peyton Manning hits Eric Decker on two consecutive plays and then completes a pass to Brandon Stokely. These are all 7 to 8 yard plays and Manning picks up the tempo of practice.
Jacob Tamme catches a pair of passes on crossing patterns and Joel Dreesen makes a grab from Manning. Brock Osweiler leads the 2nd team and completes passes to Fullback Austin Sylvester and Tight End Virgil Green. On the next play, Brock makes his decision way too late. He tries to dump it off to the sideline for Ronnie Hillman, but the Running Back is closed on immediately and can’t do anything with it.

Caleb Hanie’s first pass of the session is tipped three times and intercepted by Elliot Coffey. Caleb’s next attempt is for Tyler Grisham, but it is broken up by Joshua Moore. Adam Weber passes complete to Xavier Omon and another breeze blows through for a minute. Weber passes for Cornelius Ingram is dropped. HORN,

After a shirt water break, the Special Teams have another go. This time the Punt Coverage is working on their getoffs. Syd’Quan Thompson is the sole returner shagging punts from the Jugs machine. 5 minutes or so go by and Eric Decker joins Squid to field punts. Personally, I’d like to see Syd’Quan take the Punt Return duties. He has the shiftiness to do the job. HORN.

Another round of 11 on 11’s at the 35 yard line. The Chain Gang sets up so the two sides can gauge their progress and the Offense works from the huddle.

Willis McGahee turns the corner around the right side and then Manning floats a pass for Chris Gronkowski that the Fullback leaps for, but can’t come down with. Champ Bailey gets a hand in to break up a Manning pass intended for Decker and Brandon Stokely makes a catch good for about 6 yards

Brock Osweiler sends a pass intended for Matt Willis, but the two Defensive Backs covering him collide with each other and the pass falls incomplete. Osweiler’s next pass is complete to Virgil Green, who is being guarded by Wesley Woodyard.

Mario Fannin gets popped by Steven Johnson. Caleb throws a swing pass to Fannin on the following play and then Hanie forces Tyler Grisham to make a diving catch. Adam Weber hooks up with Austin Sylvester with Joshua Moore defending. HORN.

Time for some 7 on 7 action. Peyton Manning overthrows one of the Tight Ends in a high lob to the sideline right at a security guy, who gets chewed out for not catching the ball.

Manning tries a deep ball for Demaryius Thomas that is broken up by Tracy Porter. Lance Ball catches a swing pass from Peyton and Joe Mays lays the wood on him with an audible pop. Manning passes to Bubba Caldwell directly in front of where I am sitting.

Osweiler’s pass for Matt Willis is defended well by Rafael Bush and Willis can’t quite pull it in. Brock hits Virgil Green with a quick pass and then Eric Decker makes a grab from the rookie QB. On the next play, Rafael Bush intercepts Osweiler for a "pick six." The rookie comes back and fires a touchdown to Jeremiah Johnson on a quick post.

Caleb Hanie hits Anthony Miller, who promptly gets popped by Duke Ihenacho. Then Hanie completes a pass to Jason Hill despite Ramzee Robinson hanging all over Hill.

Adam Weber waits too long to get the ball to Mario Fannin and Steven Johnson pops the Running Back. Weber completes a pass to Xavier Omon and then connects with Cornelius Ingram deep over the middle. HORN.

Another short water break and the breeze picks up once more.

One last round of 11 on 11’s begins with Willis McGahee taking a misdirection trap play for an 8 yard gain. Manning throws complete to Jacob Tamme and then has a pass intended for Stokely broken up by Champ Bailey. For some reason, Drayton Florence drops and does a set of push ups. Perhaps he blew his coverage assignment, but I missed seeing the mistake that resulted in the self-imposed penance. Lance Ball gets a carry and then the "Two’s" take their reps.

Osweiler passes to Matt Willis on a late developing crossing route. Gronkowski does a good job lead blocking for Ball, allowing Lance to get around the left corner. Chris blocked three different defenders on the play.

Hanie holds on to the ball long enough to earn a Sack, but throws it away. On the next play, he fumbles the snap and the ball is recovered by Derrick Wolfe.

Jeremiah Johnson rumbles for a few yards off the right side. An Adam Weber pass is "alligator armed" by Mark Dell and broken up by Ramzee Robinson. Weber then throws complete to Cornelius Ingram.

The first team rotate back in and Lance Ball gets a carry, Decker beats Champ Bailey and then Eric beats Drayton Florence as both players end up high in the crowd. Weber completes a pass to Sylvester.

A Hanie pass intended for Virgil Green is broken up by Rafael Bush. Caleb passes to Jason Hill and then Xavier Omon gets a carry for 8 yards and then catches a pass out of the backfield. HORN.

The Special Teams come on the field for another round of return blocking and this time Syd’Quan Thompson, Decker and Matt Willis shag punts from the Jugs machine. Wiiiis and Decker muff their chance, but Syd Quan field his chance. HORN.

11 on 11’s. The first pass goes to Demaryius Thomas, McGahee gets a few yards and then Weber is nearly intercepted by Tony Carter. Jeremiah Johnson gets stuffed at the line.

Manning gets the ball to Bubba Caldwell and he stiff arms the Defensive back. Hanie passes high to De’Andre Goodwin and the receiver goes up and makes the catch. Ronnie Hillman gets stuffed at the line and then Hanie is nearly picked off by Syd’Quan Thompson. Caleb completes a pass to Tyler Grisham and the final HORN blows.

I already explained the difference in the autograph session, so I will say good night. It has been a long day.