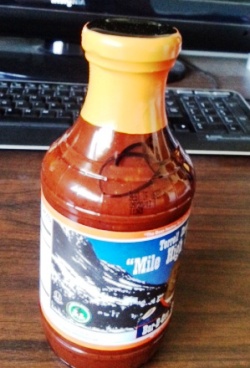 Summertime means barbeque time across the U.S. and many folks turn to their grills to help celebrate our Nation’s anniversary of Independence. We still have a slow three weeks until Training Camp begins, so I thought it might be a good time for a giveaway. If you have ever been to the Mile High Report Facebook page, you probably know that I recently obtained a couple of autographs from Broncos legend and Super Bowl MVP Terrell Davis. Well, I had to purchase 6 bottles of his Barbecue Sauce to get two ball caps signed. I also got one of the bottles signed while I was at it. So I thought we could have a drawing. The BBQ Sauce is what we are giving away.

All you need to do to qualify for the drawing, is to leave a comment here or on the MHR Facebook page under the giveaway post. The names will be gathered and drawn out of a Broncos hat (of course).

Three winners will be drawn from the Facebook page and two from the MHR blog post. After that, I will put all the names from both sites into a drawing for the signed bottle of Terrell Davis’ Barbecue Sauce.

The comment entries will be closed at 6:00 pm MT on July 4th, 2012. The Winners will be posted on July 5th on Twitter, Facebook and in Horse Tracks on MHR.

Come on back to Mile High Report tomorrow for some recipe suggestions for TD’s BBQ Sauce.