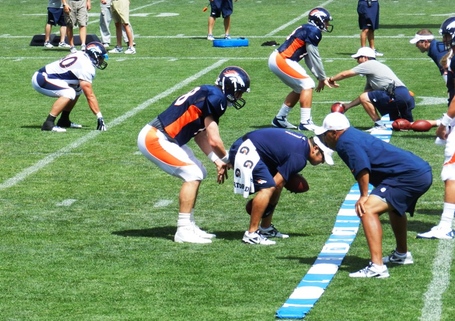 Since it is the weekend, I make sure that my arrival is early enough to secure a spot in the parking lot at the Broncos Dove Valley complex. So far it is a sunny day with few clouds. The weather forecast said there was a 30% chance of precipitation, but I am hoping that it will wait until practice is over.

At 2:05, Ryan Harris and Brock Osweiler emerge from the locker room in full pads and begin to loosen up. They are joined shortly by Matt Willis, Other players wander out two and three at a time and at 2:14, Peyton Manning makes his entrance to the cheering of the crowd on hand. It looks to be another sizable attendance and I later find out there were 4,003 fans there to witness practice today. HORN.

Practice begins just like every other, with the Special Teams Unit. Today they are split into two groups. Jeff Rodgers leads half of the Unit in Coverage drills, specifically, getting around the first blockers to close on the return man.

Keith Burns has the Gunners closing in on the punter, to either corral him into cutting into the rest of the coverage or make the tackle. About halfway through this segment the drills change to a different part of the coverage process. HORN.

I notice Jamie Blatnick is in shorts and a ballcap as the 1st teams assemble for 11 on 11’s. The Offense works from a short field at the 25 yard line. Peyton Manning throws a pair of touchdowns to Eric Decker. Willis McGahee and Joel Dreesen during this half speed segment. Lance Ball gets a carry and Knowshon Moreno catches a pair of passes swinging out of the backfield.

I notice Manny Ramirez is taking the reps at Right Guard during this drill. Chris Kuper ended up with at least as many reps as yesterday. Sealver Siliga is playing at Left Defensive tackle with the 1st team. I see that Kuper and Ryan Harris are in at Right Guard and Tackle getting their work in. HORN.

It’s time for stretching, so I do a little tweeting and take some pictures. The players finish up and Huddle to "break it down." HORN.

Now it’s time for individual position drills and instruction. The Offensive Linemen move over to the short field where they hit the 5-man blocking sled. The Running Backs hurdle, the Tight Ends block each other. The Quarterbacks work on 3 and 5 step drops and the Wide receivers run routes while coach Tolbert beats on them with blocking pads. HORN.

The QBs join the Running Backs in handoff drills while the Tight Ends run pass catching drills and the Wideouts work on the fade routes.with coach Tolbert throwing to them. HORN.

The Running Back’s go off and hit the single sled while the QB’s and WRs end up down at the 20 yard line. I think they start off too fast, but they make an adjustment and get a rhythm going before picking up the tempo again A few minutes later, the Line of Scrimmage is moved down to the 10 yard line and they resume their passing drill. HORN,
7 on 7 passing drills begin with Tracy Porter knocking a pass away from Lance Ball. Champ Bailey denies Demaryius Thomas and on next play Bay Bay runs away from Joe Mays in a big mismatch.

Manning threads a pass to Eric Decker in double coverage and then hits Jacob Tamme, who makes a Terrific one -handed catch. Bubba Caldwell comes back for a Manning pass. Then Adam Weber throws slighly behind Jason Hill, who couldn’t make the catch. Brock Osweiler completes passes to Mark Dell and Gerell Robinson. Then Caleb Hanie has Virgil Green drop a pass. The next play, Hanie gets the ball to Gerell Robinson and the HORN sounds.

9 on 9’s commence for some rushing Offense to get some reps. The Wide Receivers and Cornerbacks move to the end of the field to continue yesterday’s battle in the Red Zone. Since the 9 on 9’s are in front of me, that’s where I focused most of my attention. Willis McGahee gets the first two carries with decent results. Lance Ball takes the next carry off Left Guard and gets a few yards. Mario Fannin didn’t fare too well, but Jeremiah Johnson did well in this segment and Ronnie Hillman had some good and some not so good. I finally got to see a little bit of speed from him, but it’s still too early. Xavier Omon got two of the final three carries and ran like a man trying to earn a roster spot -- with determination and authority, HORN.

Now practice picks up some momentum. Red Zone work, 11 on 11’s full speed. McGahee gains a few yards around the right side and then Peyton Manning hits Eric Decker on a post pattern. Tracy Porter has a close encounter with a pass by Manning, but he fails to hang on to it. Jason Hunter bats down a Caleb Hanie pass at the line. CJ Davis is at Center for the 2nd team. Manning hits Andre Caldwell, Weber has a pass batted down by a Corner blitzing. Jeremiah Johnson turns the corner around the left side.

Ronnie Hillman gets around the corner and shows some speed, then Osweiler tries to throw off his back foot and his pass falls incomplete intended for Virgil Green. Hanie throws on the run to Tyler Grisham. HORN.
.
The next segment is another session by the Special Teams. This time the Kick coverage team gets some work.Omar Bolden, Matt Willis, David Bruton, Wesley Woodyard, Danny Trevathan, Nate Irving and Lance Ball are with the first unit. The one’s and two’s get 2 reps each and then the HORN.

7 on 7 Red Zone drills with the ball on the 15 yard line. Manning hits Decker for a touchdown on the first play, but my attention is drawn directly to the 5 on 2 pass rushing drill going on in front of me. The Offensive Line is working with all 5 players against two Defensive Linemen. I see Philip Blake make another bad snap, this time to Caleb Hanie and seriously doubt that JD Walton’s job is in jeopardy. HORN.

More 11 on 11 Red Zone drills with the Offense working from the huddle. Chris Kuper is at Right Guard for this drill. Demaryius Thomas "stone hands" (drops) a pass from Manning and then Peyton throws incomplete to no one. Someone may have run a wrong route, but nothing is said about it.

The ball is moved down to the 5 yard line and a 2 RB, 2 Tight End package is set up. The play doesn’t quite convert and it looks like Chris Clark is walking gingerly.

The Line of Scrimmage is moved out to the 20 yard line. Adam Weber drops back and then takes off for the end zone for six. Jeremiah Johnson turns the corner and gains a few more yards. Then Ronnie Hillman runs around the right side and takes off, showing decent speed. I haven’t seen him open it up yet though.
Brock rolls out to the right and throws the ball away. That makes me do a double take to check and see if that six is an eight on that jersey.

Weber throws an incomplete and then Hanie throws a high pass that caroms off the goal post crossbar and Joshua Moore picks it off. HORN.

Special Teams Kick coverage drills. Matt Prater is booting the ball through the uprights and into the crowd. The red socks come out and get applied to the helmets of the scout team. Along with Prater there is Chris Harris, Matt Willis, Omar Bolden, Nate Irving, David Bruton, Drayton Florence, Danny Trevathan, Wesley

Lance Ball and Rafael Bush. Ronnie Hillman is fielding Kickoffs and shows that he could do an adequate job back there for the Broncos though I have yet to see.him go top speed. HORN.

The final segment is 11 on 11’s. Demaryius Thomas comes back and makes a catch. A few raindrops begin to fall and there is a scrap developing after a Xavier Omon is taken down on the sideline. Tony Hills and Mike Mohamed. Then Sealver Siliga joins the fray and the practice is getting serious.

The Defense shows blitz and Manning audibles to a quick pass to Stokely.Adam Weber has a pass attempt batted down by either Kevin Vickerson or Derrick Wolfe, I can’t tell which one did it. Rafael comes on a late blitz and bats the ball away. Caleb hits Jeremiah Johnson deep downfield, JJ makes a diving catch to haul it in. Philip Blake muffs another snap and I wonder why he is still at Center. HORN.

I get a couple of autographs and then head for home.