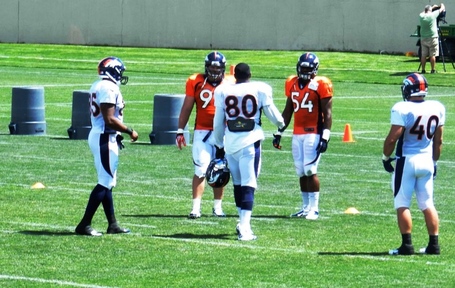 Today’s report comes from the 49 yard line. The players were in Full pads for the third day in a row. Jamie Blatnick returned to practice, but Quinton Carter (Hamstring) and Orlando Franklin (concussion) did not participate. Also among the missing was Justin Bannan (calf), who was out on the field in shorts.

Chris Kuper played a lot more today. His increasing workload is a welcome sight. Knowshon Moreno looks like he isn’t suffering any setbacks. He runs smooth and without a limp. It is difficult to say if he is 100% since this is practice speed, but I am encouraged by his progress. Mario Fannin however, has a small limp when he runs.

There were highlight catches, big hits and a few scuffles this morning as the temperature and full pads caused tempers to flare. Even Peyton Manning was barking at a few players, mostly his fellow Quarterbacks, telling them to pick up the tempo. He had to reposition a few other players at times, but he did a good job cheering his teammates as much as chastening them..
Jeremy Beal had a few stand out plays with the 2nd team, picking up a Matt Willis fumble after catch and getting around the corner at Right Defensive End to apply pressure on the Quarterback.

Jason Hunter and Joe Mays both had a touch Sack each on Caleb Hanie, who was scolded for holding on to the ball too long at times. Brock Osweiler showed quicker decision making more often yesterday and today, in my opinion. That’s not to say I think the rookie should jump Caleb on the depth chart, but it speaks a few chapters on the opinion that Brock is very raw as a Quarterback. I believe I can see some of the things John Elway was looking at when he evaluated the Broncos 2nd round draft pick.

Ryan Harris filled in for Orlando Franklin at Right Tackle. I didn’t notice him sticking out good or bad and considering the rushing game had their best day so far, he must have done a good job.
CJ Davis is moving into the 2nd string Center position after Philip Blake’s 3 bad snaps yesterday. Manny Ramirez replaced him when he wasn’t taking reps for Chris Kuper, but Ramirez had a bad snap today and was yanked right away.
Rahim Moore had the big hit of the day, laying out Lance Ball as the Running Back was attempting to catch a sideline lob into double coverage.
Ronnie Hillman and Jeremiah Johnson looked pretty good today, especially running in traffic. I think the Offensive Line has had enough of the D-Line’s stonewalling their Running Backs in the last 3 practices, because tempers flared a few times today. JD Walton and Jason Hunter got into it. There was also some pushing and shoving between Adam Grant and Jamie Blatnick when Lance Ball got hammered. Syd’Quan Thompson popped Tyler Grisham, knocking a catch out of the Wideout’s hands. Austin Wuebbels pancaked Malik Jackson on a running play near the end of practice.

The crowd appeared to be smaller this morning, though security packed us in like sardines. I would venture to guess their was close to 3,000 fans in attendance at Training Camp today.

Tomorrow is a day off, so I will present some of the pictures I have taken so far at that time.