That's right, folks. I have completed my arduous journey from Kentucky to Denver. It took me 2 days and over 1200 miles to get here, but I finally made it. Last night, I drove south on I-76 through Denver and, using some wonderful Android apps, found my way over to Aurora for a cheap hotel. That didn't work out so well, though, seeing as most hotels I went to had only smoking rooms available.

Being the brilliant thinker that I am, I decided to travel further south so that my hotel would be as close to training camp as possible. The Sleep Inn off of Arapahoe did just fine. It was clean, but I think I would have been satisfied with any place that had a horizontal padded place for me to sleep, at that point.

I awoke around 10 am.... excuse me, it was 8 am (I quite like the whole time difference thing. It makes lazy people like me seem like early risers). I gathered my things, prepared to hit up the nearest Walmart for some cheap Broncos gear. Then I got the tweet from Lindsay Jones (@PostBroncos) that the public practice was canceled due to inclement weather. Great. So, I traveled 1200 miles for practice to be cancelled. All the hours in the car I spent getting amped for the Wednesday practice would have to be postponed until Thursday.

So, how was I going to spend this day? I was going to the house that Bowlen built. Sports Authority Field at Mile High.

After a morning walk to shake off the cramped up muscles and sore ankles that were victim of a cross country of driving, I had some free hotel breakfast and went north. I got off of I-25 and went toward the stadium. What a confusing place Let me just mention this for you people who are used to driving in Denver. Your interstate system is extremely confusing. I suppose my opinion of it is fairly flawed, considering my first experience of it was after dark last night. I almost got killed. The speed limit changes from 65 to 55 to 65 to 45 and when I'm trying to listen to Karen (my GPS) give me direction, it's unnerving to watch streaks of blue, red or silver cars fly by you. Adding to my confusion was the fact that the Stadium tour parking is on the west side of the stadium but the interstate exit leads you to the east side of the stadium.

Of course, I know this, now, but in the heat of the moment, I had the hardest time remembering what the website said about stadium parking.

Anyways, I arrived at the stadium with about 5 minutes to spare. I sprinted up the steps at gate 10 to a guy who was wearing a security shirt. I asked him if this was where the tour starts and he said no, it was at gate 1. Fortunately, there are only 10 gates, so gate 10 is next to gate 1.

Side note: The reason that there was a security guard was that gate 10 was open to workers who were doing some maintenance. There were forklifts going in and out with drywall, as I walked up.

I lightly jogged over to gate 1 and up the steps. After going inside where the tour tickets were being sold, I realized I was a mile high. Catching your breath isn't as easy here as it is in Kentucky. Hello, Mr. Obvious.

I was just in time for the start of a tour. The tour guide, Steve, was extremely knowledgeable and kind. He went around the room and asked everyone for introductions. I was the furthest from home. There were some Cowboys fans from Texas and then a few people from Nebraska, but I had them trumped.

We proceeded to start the tour. We went down into a suite. Steve went on to talk about the stadium grass and how it's a hybrid natural grass, with a synthetic material interwoven into the field, allowing the natural grass to have a guide, of sorts, which prevents divots from coming up during a game. That was pretty interesting, I thought. I made note of how brown some of the field was and Steve reassured me that it would be green before any games were played. A Kenny Chesney concert ruined the grass, but new grass has been planted and should be green in the next few days. 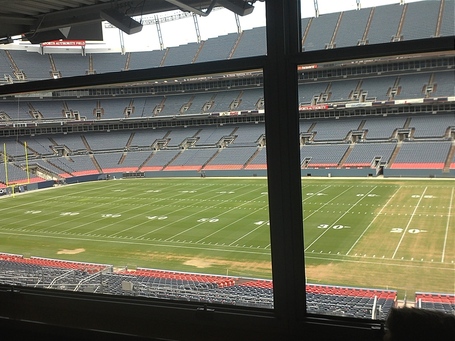 On to Pat Bowlen's suite... not quite. The tour was not allowed into that suite, but Steve talked all about how Pat Bowlen frequently abandons his suite to go down on the sidelines. Apparently, people will often wait outside in the hallway of the suite level to get a glance of Pat Bowlen going to the field level, but those people never see him. Apparently, Pat Bowlen is a lot like Batman. He has a special place on his mantelpiece that he can touch or tap or (unknown) that opens to a secret elevator that goes straight to the field level. Pretty cool. Von Miller often talks about how he and Elvis Dumervil are Batman and Robin. The true Batman, however, is Pat Bowlen.

The tour continued. We heard a lot about the parking lot previously known as Mile High Stadium. I wish I were around to have seen it in its heyday.

Steve took us up to the media level. He showed us the room where Dave Logan does his magic and the room where the assistant coaches sit. It was also interesting to see the CBS room. That place is a dungeon. The ceilings are blacked out so that the light doesn't play any crazy tricks while they're doing the telecast, some of it is soundproofed, and the windows can be opened to let in the crowd noise. Some of this seems fairly obvious, but it was cool to see it, in person.

We then made our way down the hallway to where the writing media sit, fully equipped with phones and internet access. Steve mentioned that the "local media" sit closest the sideline, and the further down into the endzone corner you go, the "less local" they usually are. He mentioned where Peter King sat and people were quite impressed. I jokingly asked where Andrew Mason and Lindsay Jones sit and Steve wasn't sure. I pointed out a chair and said that I'd sit there, someday. Steve chuckled. I never told him I was a writer, so he had no reason to have responded any differently. It was an inside joke that I had with only myself, but now share with you. 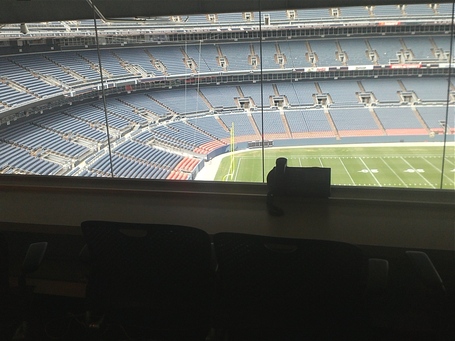 We continued to the United Club Level, where many prom events are hosted. I took particular interest in this because I attended my high school prom at Paul Brown Stadium. How cool it must be to have your prom at Mile High, though.

I envy you, people of Denver.

Steve led us down an elevator to the field level. He took us past the officials locker room. Ironically, the sign for this locker room has braille on it, in the upper right hand corner. Those poor blind referees.... It kind of explains some of the controversial calls in Denver, though, doesn't it? 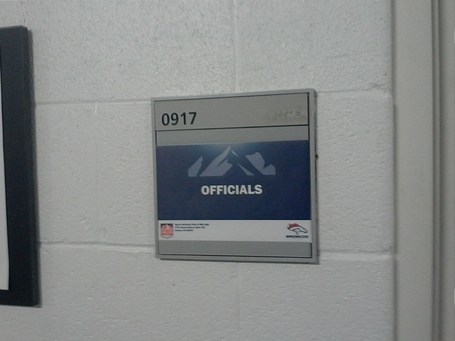 We weren't allowed to enter the Broncos locker room, but we did get a chance to go into the visiting team's locker room. What an interesting place. First of all, Steve mentioned how the orientation of the locker room placed the offense on one side and the defense on the other. Then, he was talking about something and I kind of zoned out. I was starting to get a headache. About 2 minutes of being in there, Steve said "Oh! I forgot to mention something. These carpets are designed to be disorienting. Some people get dizzy in here or get headaches. So, when the opponents are getting prepared to go to battle, they'll get up out of their chairs and feel... something other than 100%." 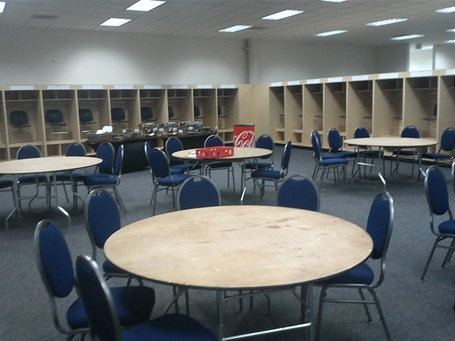 The picture is not as disorienting...

Connected to the locker room is the training room, where visiting players will go for treatment. In this room, sits the old hot and cold tub that used to sit in Mile High Stadium. The Broncos, on the other hand, have a brand new Jacuzzi in their training room.

We left the visitor's locker room and continued down a carpeted path toward the field. Three Broncos Cheerleaders came walking past and most people in the tour took the opportunity to take pictures. I just couldn't get my camera phone out quick enough and missed the opportunity.

My mind was elsewhere, though. The reason? We were standing in the tunnel. The tunnel that led to the field. I was 50 feet away from the field. The following picture was worth the price of admission, alone, but I thoroughly enjoyed the whole walkthrough. I hope you decide to go out and take a tour of the stadium, if you get a chance. It costs $10 and it's worth every penny. Hopefully practice doesn't get cancelled tomorrow, though. It was cool to see the stadium, but I traveled all this way to watch training camp. This tour certainly tied me over, for now. 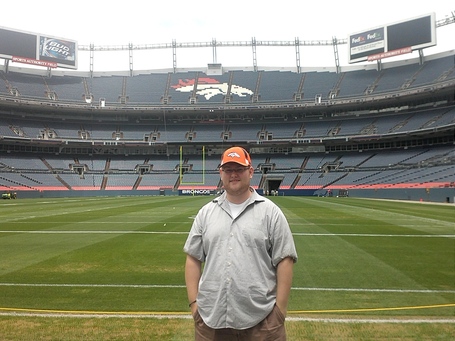