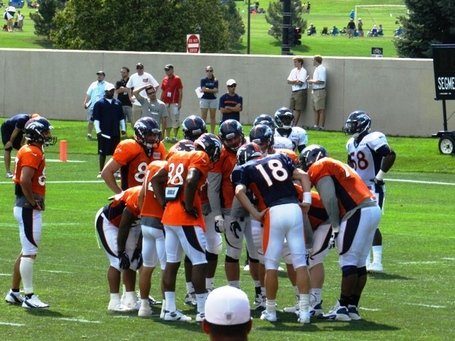 The 48 yard line is where I plant myself to watch the Denver Broncos run through their Training Camp practice on Saturday. After contemplating whether the weather will stay cool or the cloud cover will burn off, WyoBronco comes up the berm and introduces himself. It is always a pleasure to meet any member of Mile High Report, or Broncos country for that matter.

Just my luck, the clouds are burning off, so I scramble to apply the SPF 30. Brock Osweiler is the first player to emerge from the locker room and I am pleased to see that it will be another Full pads practice session. It takes me a minute to figure out that the Offense is wearing the Orange jerseys and the Defense is donning the White. I can only surmise that the reason behind this is that the next game (vs. the Seattle Seahawks) is a home game. HORN.

The Offense begins their walkthrough session vs. the Scouts. Mostly pass plays, this segment lasts for about 15 minutes. I hear peyton Manning call out "Louisiana Stairwell Molasses!" followed by "Blue 80, Hurry, Hurry, Hut!" During the last couple of reps, he calls audibles. HORN.

The Stretch interval lasts for about 5 minutes and then the team breaks off into Individual position drills. Andre "Bubba" Caldwell is wearing day-glo Orange socks with matching orange and denim blue trimmed cleats today.

Not participating today are Justin Bannan, Ryan Harris, Chris Gronkowski, Tyler Grisham, Danny Trevathan and DJ Williams. Quinton Carter is still MIA too. Jim Leonhard was on the sidelines in his No.45 jersey and the newest Bronco, Keith Brooking, took quite a few reps with the second unit. His jersey number is 57, for those of you keeping track at home.

The Wide Receivers are doing a tip drill this morning. Defensive Coordinator Jack Del Rio’s son is throwing passes to them while Coach Tolbert stands about 3 feet in front of them and tips the ball as the Receivers run down the 45 yard line. After that, the Quarterbacks and Tight Ends join the Receivers to run through some passing drills. This drill has undergone another change. If you recall in previous practices, the Quarterbacks go through these drills 2 at a time, side by side. The QB on the right switches to the left after his first rep as a new QB takes his place on the right. Meanwhile a Tight And and a Wide Receiver are running routes and catching passes from the pair. Today, the QB to the left was passing to the outside receiver on the right and the QB on the right threw to the receiver running to the left. Perhaps this is a way to get the players to focus and concentrate, or maybe it is just to mix things up to prevent anyone getting into a rut with the same old, same old by creating a little chaos. This position trio moves down to the Red Zone area and the Quarterbacks throw fade passes to the Receivers with mixed results. HORN.

After a quick check of my Twitter feed, I see that former Cornerback and coach Jimmy Spencer is a guest today. As his nickname "Teach" suggests, he cannot refrain from giving some of the young Defensive Backs some pointers. It is a welcome sight to see Bronco Alums visit Dove Valley. I don’t think they felt welcome in the recent past. That is worth a Mile High Salute to John Elway. HORN.

11 on 11’s start out at the 35 yard line with the 1st teams going against one another. Eric Decker catches a Manning pass on a crossing route and then Willis McGahee gets stuffed at the line. Peyton throws for Brandon Stokely, but it is broken up by Wesley Woodyard. Champ Bailey breaks up the next pass, intended for Matt Willis. Then Woodyard intercepts Manning on a pass meant for Jacob Tamme. Peyton just overthrows Matt Willis over the top, with Tony Carter defending.

Caleb Hanie completes an outlet pass to Ronnie Hillman, who takes off up the field. Brock Osweiler passes for Jason Hill, but Hill dropped the ball. Jason Hunter gets a Sack on the next play, dominating Chris Clark. Adam Weber passes for Cameron Kenney. but the receiver fell down during his cut. Then Weber hits Gerell Robinson as Joshua Moore falls down. Gerell puts a move on the Safety and scores. HORN.

The players switch sides as the ball is placed at the 10 yard line with the Offense moving away from the End Zone. 11 on 11’s with the first teams again, but this time the Offense will run. Willis McGahee starts off the segment with a 5 yard gain, getting a solid push by the Offensive Line. Peyton Manning draws the Defense offsides with a hard count on the next play. McGahee gets through the line again and then Lance Ball rushes for 4, 3 and 1 yard on his three reps. Jeremiah Johnson picks up a yard. Ronnie Hillman runs for 4 yards and Xavier Omon earns 8 tough yards. HORN.


The players take water and then the ball is placed at the 44 yard line. The play clock and the Chain Gang are now in effect. Peyton connects with Eric Decker on a middle cross and then finds Joel Dreesen free in the seam for a nice gain. Decker catches a deep out with Tracy Porter covering him. Knowshon Moreno takes a Draw for 7 yards. Manning tries to hook up with Matt Willis, but Rahim Moore makes a good play and breaks up the pass. Bubba Caldwell is the recipient of Manning’s next pass and then takes an end around 9 yards in the next play. Caleb Hanie throws a completion to Matt Willis. Adam Weber hits Jason Hill over the middle, then overthrows a wide open Willis on the following play. Osweiler hits Mark Dell and then Jeremiah Johnson with a swing pass. HORN.


The Line of Scrimmage is moved to the 36 yard line and Manning hits Joel Dreesen on a comeback. Willis McGahee gets to the corner and turns it upfield for a nice gain. McGahee catches a pass out of the backfield and then Dreesen and Mike Adams get tangled up. Manning passes to the sideline for Brandon Stokely, but Rafael Bush breaks up the play. Knowshon Moreno gains a couple of yards on the next play.

Caleb Hanie enters, but Derrick Wolfe and Nate Irving Sack him on the first play. After a Ronnie Hillman 5 yard run, Brock Osweiler passes to Austin Sylvester down the seam. Xavier Omon totes the rock around the right side for a 10 yard gain. Ronnie Hillman gets hit in the backfield, bounces outside and runs for 6 yards. Osweiler connects with Gerell Robinson. HORN.

The second Special Teams session begins at the 35 yard line, where the Jugs machine and Britton Colquitt alternate kicking to Eric Decker, Tracy Porter, Syd’Quan Thompson and Drayton Florence. while the others work on their punt protection scheme. Coordinator Jeff Rodgers must have a priority to not allow a blocked punt this year because they sure are working on it enough. The Red Hats (Scouts) assemble to practice against the punting unit and they take three ‘Live’ reps. HORN.

11 on 11’s in the Red Zone. Lance Ball takes a swing pass from Manning. Then Peyton throws away the next pass, overthrows Demaryius Thomas when DT can’t get off the line. After overthrowing Eric Decker on a fade, Manning gives way to Adam Weber, whose first pass is dropped in the End Zone by Bubba Caldwell. Mitch Unrein and Robert Ayers meet Weber in the backfield for a Sack.

Caleb Hanie comes in and fires a pass for Gerell Robinson, who lays out and snatches the pass for a great catch. Ronnie Hillman is stopped at the line of scrimmage and Osweiler pulls it done and runs on the final rep. HORN.

11 on 11’s continue at the 30 yard line. Manning hits Eric Decker on a crossing route and then Demaryius Thomas on a comeback with Drayton Florence defending. After rolling out to the right and throwing the ball away, Manning gets 3 defenders to jump offsides once again. Peyton has to throw another pass away because of pressure and good coverage. Lance Ball gets 4 tough yards behind Austin Sylvesters lead blocking. Then Manning throws a bubble screen to Brandon Stokely, who runs upfield.

Caleb Hanie cones in and hands off to Knowshon Moreno for one yard. Hanie’s next pass goes deep for Bubba Caldwell, but Tony Carter bats it away. Adam Weber throws an incomplete shovel pass after feeling pressure. Then Weber hits Xavier Omon for about 5 yards. Brock Osweiler takes off running and slides after a 10 yard gain. Brock completes a pass to Cameron Kenney. HORN.

The line of scrimmage is the 26 yard line to begin the last segment. The first play is a direct snap to Willis McGahee. Then Brock Osweiler throws a screen pass to Lance Ball, who gets up the field for 15 yards. At this point there was a scuffle between Orlando Franklin and a member (or two) of the Defense, who I could not see. Too many big bodies were impeding my view trying to break up the melee. Brock completes a pass to Jacob Tamme on the following play. Adam Weber hits Lance Ball on a swing pass out of the backfield for good yardage. Knowshon Moreno runs for 2 yards and Xavier Omon picks up another 3. Joe Mays, Jamie Blatnick and Von Miller Sack Adam Weber. Jeremiah Johnson around the right side for about 3 yards. Weber passes incomplete intended for Julius Thomas. Ronnie Hillman gains a yard. Osweiler has trouble getting the next paly going and Offensive Coordinator Mike McCoy tells them to re-huddle. Cameron Kenney gets the last play , an end around for no gain. HORN.

And that’s a wrap.