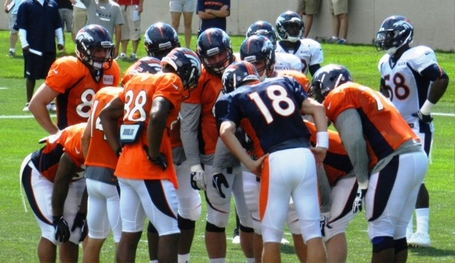 The Broncos called an audible this morning, switching practice times from this afternoon to a mid morning session. What should have been a lazy morning turned into a mad rush as I read the Tweet informing me of the schedule switch. Picturing Peyton Manning barking out his pre-snap cadence, "Hurry, Hurry" was my mantra.

I did make it to Dove Valley with plenty of time to spare, only to find the parking lot nearly empty of cars. An overcast cloud cover was also a welcome sight as I grabbed my gear and headed toward the gate. about 30 minutes before the 10:30 am start, I find a shady spot directly on the 50 yard line. I count a mere 56 other fans and wonder if anyone else got the memo.

The cloud cover remained for the entire practice which was a pleasant turn of events. The crowd ended up growing quite a bit, but I still managed to get a few autographs. More on that later.

This was without a doubt, one of the better practices this year in Training Camp. The tempo was up and the competitiveness was high. There were a couple of scrums during the running drills, with Wesley Woodyard and Jason Hunter barking like hungry dogs at the Offense, daring them to to something. That might have raised the thermostat for the guys in the trench, because shortly after that, a fight broke out.

On Special Teams, the Jugs machine was shooting squib kicks (grounders) at the back four players. Other players rotated in for each new kick, until about 20 players had taken 3 or 4 reps. ST's Coordinator Jeff Rodgers held instructions on where to run and where the blocking was directed if an upback received the Kick. I am really liking this detail.

Not practicing today were Ty Warren (undisclosed), Quinton Carter (knee) who was out watching practice, Danny Trevathan (ankle) and Tyler Grisham (knee). Back at practice were Justin Bannan, Chris Gronkowski and DJ Williams.

During 7 on 7's (passing drills), Champ Bailey stoned Joel Dreesen and broke up a pass. Peyton Manning and Eric Decker connected on a deep pass with Rahim Moore and Champ covering. Then Brock Osweiler hit Bubba Caldwell on a slant. On the next play, he found Julius Thomas for a deep completion against Rafael Bush. Osweiler and Caldwell hook up again with Keith Brooking in coverage.

When the Wide Receiver/Cornerback duel rolled around, there were plenty of good plays on both sides of the ball. Adam Weber and Andre "Bubba" Caldwell scored on a deep pass play. Manning and Eric Decker also had a deep pass for a touchdown against Champ Bailey. Champ made Decker earn that one though.

Chris Harris missed an interception right in his breadbasket during 11 on 11's.

Matt Willis had a rare lapse of concentration and dropped a sure catch.

I finally got to see that burst I was looking for from Ronnie Hillman. He took a handoff designed to go off the Right side, reversed his field and took off around the left side for a good 20 yards.

Adam Weber completed a 10 yard pass to Julius Thomas and JT turned on the afterburners all the way to the End Zone.

Weber also threw a pick straight to Duke Ihenacho right after that.

Rahim Moore had an interception on Manning, who was looking for Demaryius Thomas on a fade in the End Zone during Red Zone drills. Thomas was double covered by Moore and Tracy Porter.

Peyton Manning threw touchdown passes on the next two plays, one to Demaryius Thomas and the other to Joel Dreesen.

Another bad snap by Philip Blake occurred late in practice.

Wesley Woodyard, Justin Bannan and Chris Harris got to Manning in the backfield on one play.

During short yardage drills at the 4 yard line near the end of practice, Manning completes a pass to Lance Ball with Wesley Woodyard covering. When Ball scored, the Offense began barking at Woodyard. You know what they say about paybacks.

I was hoping I could get an autograph from Von Miller today and I must be blessed because my frien Shadd from Broncoplanet was closer than I was and took my #58 jersey and got him to sign it. Then I got 5 others on a pair of new ball caps for the MHR Contests this year. I have a few other things up my sleeve due to the donations from the MHR coffee mugs.