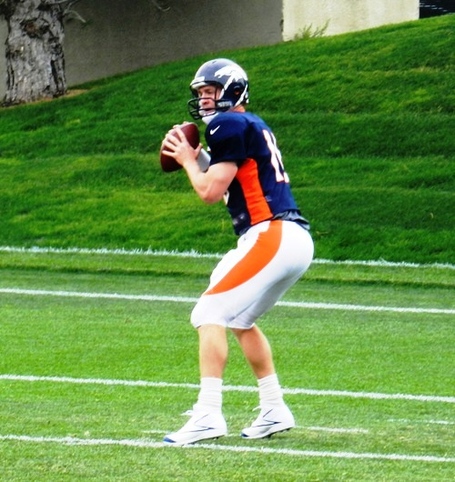 As I told you earlier, today’s Broncos Training Camp practice was rescheduled from its 2:20 pm start time to 10:30 am, due to a thunderstorm forecast for the afternoon. I also recounted how the crowd was sparse because of the late change. Well, the crowd grew to about 1,000 strong by the end of the session, but it was still nice not to fight fans for an autograph. That was one nice thing.

The first players to emerge from the Locker room are Ramzee Robinson, Austin Sylvester and Cameron Kenney. Three guys fighting for a roster spot. They are in full pads today and I believe they will stay that way all week, or at least until the Friday walkthrough before Saturday’s contest against the Seattle Seahawks. The HORN sounds and practice begins.

The Special Teams unit working this morning, is the Kick Return unit. The back four (two return men and two wingmen) are fielding squib kicks shot by the Jugs machine. Five sets of players rotate in for a turn and most of them get a chance to receive the kick or let it pass for the back to field it. ST’s Coordinator Jeff Rodgers explains what he wants out of the upbacks, whether they catch the ball or end up blocking. The return is set to go in a certain direction and Mr. Rodgers makes sure everyone is on the same page. HORN.

The segment clock is reset for 20 minutes and the first team Offense and Defense lines up for 11 on 11 walkthroughs. Nothing too exciting here, just trying to make sure everyone has things down. The Offense has a few do overs and stoppages to correct things, but otherwise it seems to go smoothly. Over on the opposite field, the second units are doing the same thing. The first team Offense works on Goal Line situations for the last 4-5 minutes. HORN.

The Stretching interval begins. Not participating today are Ty Warren (personal), Quinton Carter (knee), who is observing practice, Danny Trevathan (ankle) and Tyler Grisham (knee). Keith Brooking left the field about halfway through and I’m told he strained a Hamstring. Of course, that’s what happens when you haven’t been practicing and you’re in your late 30’s (in football years). Returning to practice are Justin Bannan, Chris Gronkowski and DJ Williams. At the end of the stretching, Chris Kuper breaks it down with a team huddle and a "AAAH - OOOH!" HORN.

Individual position drills commence and I pause to take some pictures. The Quarterbacks are passing to the Wide Receivers and tight Ends. The syncopation of these drills is mesmerizing. Synchronized swimming (or diving for that matter) doesn’t have a thing on this kind of action. If the players are this attuned after two weeks of Camp, I have high hopes indeed, HORN.

Over to my left, some tall tackling dummies (we’ll just call them Raiders since they are black) are set up to mimic a partial Offensive Line. This is to be a pass blocking drill. To the left hand side of a lone Quarterback, a Running Back is assigned a Linebacker to block. To the Quarterback’s right, a Tight End lines up opposite a Safety. The two sides alternate in this drill since there is only one QB. Running Backs coach Eric Studdesville makes rookie Ronnie Hillman take an extra "Do-over" rep. HORN.

7 on 7’s (passing drills) begin with the 1st units. On the first play, Champ Bailey sets the attitude and breaks up Peyton Manning’s pass intended for Joel Dreesen. Manning’s next pass goes to Demaryius Thomas, with Tracy Porter defending. Peyton goes back to Dreesen for a completion. Then Tracy porter breaks up a pass meant for Andre "Bubba" Caldwell. Eric Decker is overthrown deep with Porter and Mike Adams defending on the play. After Manning hits Brandon Stokley on a crossing route, he tries the deep pass to Decker once more and Eric stretches to make a fine catch without losing his balance. Rahim Moore and Champ Bailey were the victims on that play.

Brock Osweiler gets the next reps at QB and hits Bubba Caldwell on a quick slant. on the ensuing play, Brock connects with Julius Thomas deep for a touchdown against Rafael Bush. Osweiler passes complete to Caldwell on a sideline out pattern with Keith Brooking defending. Adam Weber throws a nice pass over Omar Bolden and into the waiting arms of Gerell Robinson. Weber hits Cameron Kenney with Joshua Moore in coverage. Caleb Hanie completes a pass to Greg Orton. HORN.

9 on 7’s (running drills) are to my left and the Quarterbacks feed the Wide Receiver/Cornerback duel to my right. This segment always splits my attention, so bear with me as I go back and forth.

The Defense is barking like a hungry dog, with Wesley Woodyard and Jason Hunter instigating the trash talk for the Offensive Linemen. I like how this practice is so competitive, The guys have turned it up another notch. A lot of good work is getting done this Camp, moreso than the previous three I have attended.

Adam Weber throws a deep touchdown pass to Bubba Caldwell, who has Tony Carter guarding him. Not to be outdone, Peyton throws a deep touchdown pass to Eric Decker, with Champ Bailey defending. Manning then hits Demaryius Thomas, who makes a leaping grab over Omar Bolden at the sideline. Then I see Wesley Woodyard and Anthony Miller scrapping and Wayne Tribue gets a piece of another Defensive player. More barking ensues as the players are separated. I notice Tyler Grisham running pass routes at half speed while an intern throws to him. It looks like some light conditioning work. I also finally get to witness that burst of speed that I was waiting to see out of Ronnie Hillman. The rookie took a handoff and started to the right. Then he reversed direction and took off around the left side. He would have scored from the 35 yard line, but one of the Safeties tracked him down. It wasn’t scary speed, but it’s nice to know there’s another gear there. HORN.

11 on 11’s start up at the 40 yard line. Peyton Manning hits Willis McGahee right in the breadbasket, but Willis drops the ball. McGahee rushes behind the lead blocking of Chris Gronkowski for minimal yards. Peyton says, "Let’s go!" Manning’s next pass intended for Brandon Stokley bounces in and out of the hands of Chris Harris. Manning gets a deep sideline completion to Decker with Champ covering. Peyton passes for Jacob Tamme, but Rahim Moore gets a hand in and breaks up the play. Manning overthrows Eric Decker deep.

Virgil Green motions into the Full back slot and leads Xavier Omon for an 8 yard gain. Matt Willis drops a pass from Caleb Hanie. Adam Weber throws a 10 yard pass to Julius Thomas, who takes it the distance for a touchdown. On the very next play, Adam throws it straight to Duke Ihenacho, who intercepts it out of necessity. Osweiler comes in to hand off the ball to Ronnie Hillman on a Draw play that’s good for about 6 yards. Brock hits gerell Robinson on a deep crossing route. HORN.The Special Teams punt coverage unit works on their "Get off" from the line of scrimmage with coach Rodgers observing. Assistant coach Keith Burns has another set of players closing in on the return man and the blocking scheme for the return guys. after 3 or 4 minutes, the Kick coverage unit assembles and they run through their repetitions. HORN.

11 on 11’s in the Red Zone. The line of scrimmage is the 20 yard line. On the first play, Peyton Manning dumps the ball off to Willis McGahee. Manning throws a fade intended for Demaryius Thomas with Rahim Moore and Tracy Porter covering. Rahim intercepts the pass in the End Zone. Peyton leads Bubba Caldwell too much on the next play, then hits Demaryius Thomas and Joel Dreesen for touchdowns on consecutive plays. Another touchdown pass to Demaryius, who out jumps the defenders.

Caleb Hanie passes complete to Virgil Green and another to Bubba Caldwell. Brock Osweiler hits Gerell Robinson for a touchdown. They try the same play again, but the pass ends up incomplete. Adam Weber gets flushed from the pocket and throws the ball away. The last play is another bad snap from Philip Blake. Jeremiah Johnson recovers for the Offense. HORN.

11 on 11’s continue with the units switching sides and the line of scrimmage is set at the 30 yard line. Peyton Manning hits Demaryius Thomas with a 35 yard pass into double coverage (Moore and Porter). Wesley Woodyard, Justin Bannan and Chris Harris meet in the backfield for a Sack on Peyton. Manning hits Jacob Tamme on a sideline out. Then a bubble screen to Demaryius Thomas is good for about 12 yards. Peyton hits Bubba Caldwell and then Knowshon Moreno runs for a couple of yards. Adam Weber connects with Virgil Green and then grounds the ball on the next play. Caleb Hanie hits Caldwell and then Weber hooks up with Matt Willis. Brock Osweiler passes complete to Gerell Robinson, who makes a nice one-handed catch down the sideline. Osweiler’s next attempt is a completion to Anthony Miller. HORN.

The Kick coverage unit takes live reps against the scouts for a five minute segment. HORN.

11 on 11 Short yardage drills ensue. 3rd and 1 scenarios begin with Lance Ball getting stuffed. Wesley Woodyard and then Rahim Moore get the better of Chris Gronkowski who hasn’t been effective all practice. Perhaps his injury is nagging him, but he looks to be giving his best effort.

The next play has Manning passing to Lance Ball with Wesley Woodyard in coverage. Ball wins this round and the Offensive players start barking at Woodyard and giving him the business, You know what they say about paybacks.

Xavier Omon converts the 3rd down behind Austin Sylvester’s lead blocking. Ronnie Hillman converts with Gronkowski leading the way. Lance Ball is too close to a 1st down for me to call behind Sylvester.

The players take it down to the 4 yard line for some goal line work. Knowshon Moreno is stuffed on the first play, then Lance Ball is stuffed. Behind Austin Sylvesters lead block, Xavier Omon scores. Caleb Hanie tries to hit Jacob Tamme, but the ball goes out of bounds incomplete. Hillman gets stuffed behind a Gronkowski lead block. Then Jeremiah Johnson scores a touchdown behind Sylvester. The final HORN ends the practice session.

As I stated earlier, the crowd had swelled during practice, but it wasn’t enough to make the autograph session difficult. In fact it was a rather pleasant change from the mob that has been the norm. I get Von Miller to sign an Orange stitched Reebok jersey. He tells me he needs to sign it to someone, so I tell him "MHR." I mention that it will be a giveaway prize for someone on the blog and he smiles while a few fans murmur something about that being so cool. The other signatures I got were from Elliot Coffey, Jerry Franklin, Joe Mays, Wesley Woodyard and DJ Williams. There will be better prizes this year for the MHR contests I assure you.

Anyway, the day has been a long one and the next practice is in the morning.