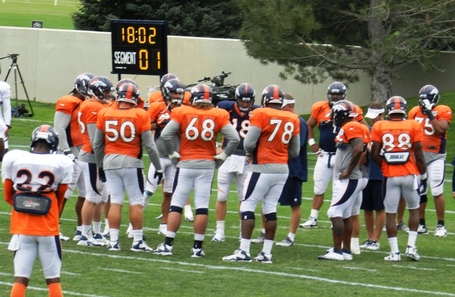 Tuesday’s crowd at Dove Valley began light, but ended up being larger than I figured. Under a clear sunny sky, the Broncos picked right up where they left off yesterday, but with fewer scuffles. The competition and tempo were right there and I believe John Fox wants to finish Training Camp on a high note.

John Lynch and Joe Sakic were seen on the sideline as well.

I’m told that Friday’s walkthrough practice is now closed to the public. That means I have two more shots to get a Peyton Manning autograph, since I couldn’t get the job done today.

Quote of the day

The first segment of 11 on 11’s didn’t start so well. JD Walton had a bad snap and Wesley Woodyard picked it up with Chris Kuper in hot pursuit. However, that was the only snag as the offense got back on track. Peyton Manning went 5 for 6 including a deep completion to Andre "Bubba" Caldwell with Chris Harris and Rahim Moore with blanket coverage. Robert Ayers pressured Caleb Hanie into throwing an incomplete pass for Julius Thomas.

During the next segment, an 11 on 11 utilizing the running game, Chris Kuper came up holding his left wrist. He ended up returning to the Locker room shortly after that.

Ronnie Hillman had a couple of nice 12 yard runs to the outside, but didn’t fare so well on plays up the middle. The rest of the Running Backs did well too, as coach Studdesville rode them hard today.

Caleb Hanie was the next Quarterback up and he promptly threw a deep pass intended for Greg Orton that Omar Bolden broke up (good play rook). Two plays later, Hanie threw a nice touchdown pass to Gerell Robinson, with Bolden and Rafael Bush defending. That was a very good play by all.

Matt Prater got some action today and went 5 for 6 at various distances, but with a focus in the 40-45 yard range. They even rolled out a portable goal post with the uprights narrowed to half the normal width. Matt nailed 3 Field Goals that went through both sets of goal posts (portable and stationary). Head coach John Fox seemed pleased with the results, as he fist bumped with Prater.

The Offense drilled on running out the clock with a lead and less than 2 minutes to go. Basically needing one first down. Manning tried a hard count on 3rd and 5, but the left side of the O-Line moved. So on 3rd and 11, Manning completes a sideline pass to Demaryius Thomas that was too close to say if it was a 1st down or not. Coach Rodgers called it short.

Brock Osweiler gets the next turn in the same situation. Ronnie Hillman ran for 5 yards on 1st down, but is Tackled for a 3 yard loss by Justin Bannan on the next play. Hillman takes a toss left around the corner and turns upfield for about 12 yards for the 1st down.

During the 11 on 11 Red Zone drills, Peyton Manning went 2 for 4, with touchdowns to Joel Dreesen and Demaryius Thomas, Lance Ball also took an inside handoff for six points.

When the second unit had their turn, Knowshon Moreno was stuffed by Derrick Wolfe. Then Knowshon got into it with Elvis Dumervil. Talk about a mismatch.

After a Brock Osweiler pass complete to Julius Thomas, JT comes up limping and favoring his right leg. He also left for the training room.

The First team ran a successful 65 yard drive using the hurry up Offense, finishing with a Joel Dreesen touchdown catch.

The Offense also ran a scenario with :59 left in a tie game, needing a Field Goal to win. The "Ones" were successful, ending with a Matt Prater Field Goal from 43 yards.

The practice ended with a 2 point conversion drill. Lance Ball was stopped short on the first attempt and Adam Weber completed a fade pass to Jason Hill to convert.

That’s it for now.