I’m sitting at the 42 yard line today since it is 92 degrees. The first thing I notice is Brock Osweiler, Austin Sylvester and Drayton Florence emerge in Shorts and Shells today, which is somewhat of a letdown. Maybe the injuries to Chris Kuper and Jason Hunter have the team erring on the side of caution.

The Jugs machine is shooting punts to Matt Willis, Cameron Kenney, Jeremiah Johnson and Eric Decker from the 35 yard line. Other members of the punting unit are working on covering the last 20 yards and in towards the Return man. There are blockers in front of the returner who are also drilling.

Rod Smith and the now retired Casey Weigmann are the local celebrities observing practice today. DJ Williams is in court, and at the time of this writing, has been convicted of Drinking While Alcohol Impaired and Driving with his headlights off. But that’s another story.

The routine is the same as any other day at Camp, with the exception of pads. Walkthroughs, Stretches, position drills and then scrimmage. I have it in my mind to keep track of the replacements for Kuper and Hunter. During the walkthrough, Manny Ramirez filled in at right Guard and did so for the entire practice. Defensively, there were 5 Defensive Linemen out there to start. Elvis Dumervil, Derrick Wolfe, Justin Bannan, Mitch Unrein and Robert Ayers. Shortly after that, Ayers returned to his role on the second unit.

The Base unit had Wolfe and Bannan at Tackle and when the Nickel package took the field, Chris Harris continued to be the third Defensive Back and Wolfe, Unrein and Dumervil were on the line with Von Miller lining up all over the place.

The first 11 on 11 drills were at the 2 yard line, breaking out of the Goal Line area. Willis McGahee got two carries and then Peyton Manning threw two short completions to Brandon Stokley. Eric Decker made a nice grab on a skinny post.

Caleb Hanie is in with the second unit. Xavier Omon moved up as well. Hanie throws for Andre "Bubba" Caldwell, but he drops the pass. The two try again with a deep sideline route, but Syd’Quan Thompson made a terrific play to break up the pass. The second Defensive Line unit is made up of Jeremy Beal, Sealver Siliga, Kevin Vickerson and Robert Ayers. Knowshon Moreno gets stuffed at the line pof scrimmage. HORN.

The 40 second clock and the Chains are in effect for the rest of practice. The ball is spotted on the 10 yard line with the Offense moving toward midfield. Manning passes to Joel Dreesen and then a short crossing route to Demaryius Thomas, with Eric Decker’s pass route clearing the area, goes for about 12 yards. Manning connects with Stokley on a short cross and then Jacob Tamme gets free deep, beating Drayton Florence for a long catch.

After a short flea flicker to Dreesen and a Manning/Matt Willis mis-read, Peyton hits Eric Decker deep and then gives way to the "next men up." Caleb Hanie overthrows Matt Willis, who is well guarded by Omar Bolden. Brock Osweiler hits Jason Hill on a quick slant and I’d say Brock has that down, time to move on to a new route to put in his arsenal. Osweiler takes off for about 7 yards after seeing his receivers covered. Hanie returns to hand off to Xavier Omon, who picks up 4 yards around the right side. Hanie passes to Mark Dell, who jukes the defender and takes off down the field. Caleb throws a completion to Cornelius Ingram and makes Cameron Kenney dive to make another grab. Adam Weber throws an outlet pass to Jeremiah Johnson. HORN.

Running drills from the 15 yard line. Willis McGahee gains 5 yards on his first carry and gets stuffed on the second. Lance Ball gets 4 yards and Knowshon Moreno picks up 4 on a Draw play. Manning throws deep into double coverage and Eric Decker can’t quite put it away. Defending were Tony Carter and Mike Adams. Moreno makes a nice run up the middle for 7 yards. Adam Weber hands off to Lance Ball, who runs for 7 yards and then 4 yards on his next touch. Xavier Omon gets two 1 yard carries. Jeremiah Johnson takes a handoff, then gives it to Mark Dell on a reverse that goes for 7 yards.

Caleb Hanie’s turn to handoff the ball. Jeremiah Johnson gains 2 yards and then 5 yards on successive runs. The next carry is a toss right for Jeremiah and he gains 8 yards on the play. Xavier Omon runs for 4 yards. HORN.

After the guys take in some water, the ball is spotted at the 41 yard line for another 11 on 11 segment. Willis McGahee runs arounf the right side. Then Peyton hits Joel Dreesen on A Tight End screen. Manning then goes deep to Dreesen against Mike Adams that would have gone for a touchdown.

Brock Osweiler hands off to Lance Ball for 4 yards. Willis McGahee is taunting and teasing Wesley Woodyard. A little payback for the last few days of Barking from the sassy Linebacker. This continues on through practice at different times and Willis remarks, "Mike mad, Wes mad, Joe mad, everybody mad."

Caleb Hanie hands off to Lance Ball, who gets stuffed at the line. Knowshon Moreno gets maybe a yard. I notice Malik Jackson getting some reps at Left Defensive End, but Jeremy Beal is the one getting pressure from the right side. Adam Weber throws an incompletion intended for Julius Thomas because of that pressure. Xavier Omon rushes for 6 yards and then 1 yard. Caleb Hanie’s pass meant for Virgil Green is broken up by Mike Mohamed. Jeremiah Johnson runs for 6 yards and Omon picks up 10 yards, with both Virgil Green and Julius Thomas leading the way. HORN.

The Special Teams punt return unit works on preventing the cover guys from getting off the line. I believe they call that "Harassment." Bubba Caldwell, Eric Decker, Cameron Kenney and Syd’Quan Thompson are shagging punts from the Jugs machine. I notice John Elway, Rod Smith, Peyton Manning and John Fox talking together on the sideline between fields and snap a few pictures. HORN.

Red Zone drills from the 20 yard line. Peyton manning’s first pass on a fade is intercepted (I couldn’t see for the trees). On the next play, Joel Dreesen is blatantly holding Von Miller, who gets good pressure. Manning hooks up with Demaryius Thomas for a touchdown, then Matt Willis gets a TD catch and Eric Decker catches a fade for another six points.

Reset back at the 20 and Caleb Hanie passes to Julius Thomas for 10 yards, then hits Virgil Green for a touchdown. From the 10 yard line Brock Osweiler connects with Mark Dell for a score. Adam Weber late to Jeremiah Johnson for 5 yards. Weber gets the nod for a Goal Line drill at the 2 and I miss what happens, but Mike Mohamed ends up with the ball. HORN.

From the 36 yard line, Manning hits Decker on a quick slant, then throws a swing pass to Lance ball that goes for 12 yards. Manning leads Brandon Stokley too much with Chris Harris and Rahim Moore in coverage. Manning’s next pass is a throwaway into the crowd because Von Miller is there for the Sack. Jacob Tamme makes a catch on a quick crossing route. Decker and Manning hook up on a bubble screen and McGahee is teasing Woodyard again. Brock Osweiler overthrows Bubba Caldwell and straight into the arms of Rafael Bush. Os and Bubba connect on a crossing route and then Adam Weber takes a turn. Syd’Quan Thompson makes a diving interception on Weber and gets up running. Weber throws the next pass away into the crowd. Caleb Hanie gets flushed from the pocket by Ben Garland and Cyril Obiozor. Caleb to Cameron Kenney on a bubble screen. HORN.

After a water break, the Field Goal unit gets some work in. Matt Prater makes Field Goals from 30, 37 (twice), 46 and 52 yards. He kicked one so long that it broke a windshield in the parking lot. I’m told it was his 5th casualty (No wonder he got a raise). Aaron Brewer got most of the reps at Long Snapper and Brock Osweiler took some as the Holder. They even threw in a couple of Fakes into the mix. HORN.

Situational Scrimmage drills. The scenario: 4th Quarter, 1:40 left on the clock, the Offense is down 21-24 with 1 timeout. The Goal os to get a Field Goal to force Overtime.

Peyton Manning gets an outlet pass to Lance Ball for 11 yards and he runs out of bounds. Manning hits Brandon Stokley for 4 yards and then again for a 1st down at the 35 yard line. Manning spikes the ball to stop the clock at 37.1 seconds. The next pass attempt is thrown away and 33.1 seconds remain. On 3rd and 10, Peyton hits Eric Decker for 5 yards. Manning lets the clock run down to 7 seconds and calls a timeout. Matt Prater converts from 49 yards out.

They reset the drill for Adam Weber, whose first pass goes deep to Jason Hill down to the 26 yard line. After another pass to Hill over the middle, the clock stops because the offensive line moves. It’s too bad, since Weber passed to Jeremiah Johndson and JJ scored on the play. Weber’s next pass intended for Julius Thomas is broken up by David Bruton. It’s now 3rd and 15 with 1:04 left on the clock. Weber hits Jason Hill again all the way down to the 16 yard line, where Adam spikes the ball with 45.8 seconds remaining. Weber then hits Greg Orton, who goes out of bounds at the 10. 3rd and 3 with 40.6 seconds left. Weber throws a fade meant for Greg orton and Jeff Rodgers calls him out. The entire Offense including Orton argue the point, but the coach says he bobbled the ball. It was very close either way. Matt Prater’s 27 yard Field Goal is good.

The last drill is run from the 40 yard line. The situation is :23 left in the 4th Quarter, 3rd and 10, down by two points. Peyton Manning hits Demaryius Thomas for 6 yards and the Field Goal unit rushes out and converts a 51 yard three-pointer. Caleb Hanie completes his chance to Bubba Caldwell for a 9 yard gain out of bounds. Prater converts from 49 and the final HORN blows.

That picture I mentioned of the Fab 4? Here it is. 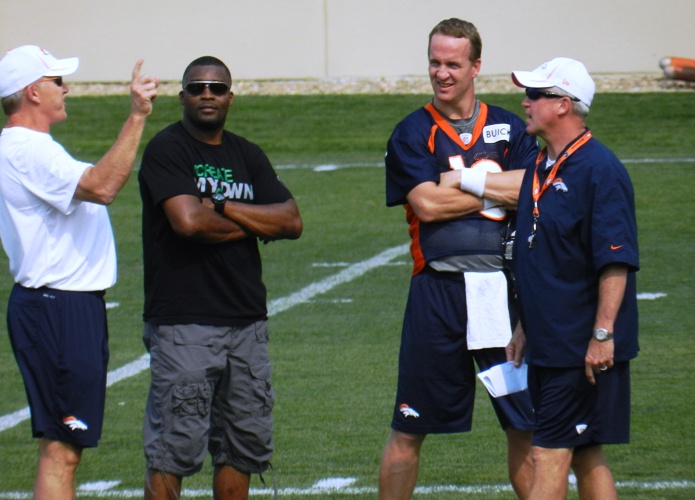 Tomorrow is the last practice open to the public. And my last chance for a Peyton Manning autograph. I did get Eric Decker, Gerell Robinson and Brandon Stokley signatures though.