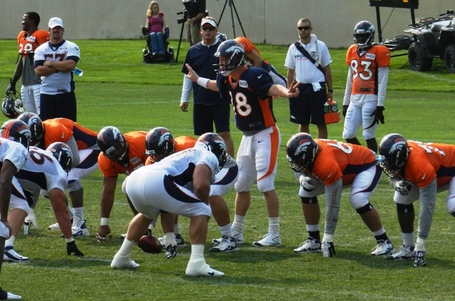 They say that all good things must come to an end. Sad but true. I still feel bittersweet about the finale of the 2012 Denver Broncos Training Camp. I thoroughly enjoy this part of the process for our beloved team. It gives me a chance to get to know most of the players a little better than through my television and that makes things personal. I won’t lay claim to being a better or more diehard fan. I believe this community is full of them. Broncos Country is vast and still growing, I am merely an enthusiast who loves to share my thoughts.

Well enough with the mushy stuff. The sweet part is that the Football season is nigh, so I won’t paint a blue picture. This one’s pure Orange baby!

On the way in, I hear that the Broncos may return to Greeley for Training Camp next year. I sure hope not. We would definitely need more mugs. It’s a 2 ½ hour drive and I can’t afford the hotel bill. Needless to say, my attendance would be very limited. I will worry about that when it arrives though. Today it’s Bronco season.

I take my seat in the area that I’ve laid "Squatter’s Rights" claim to, also known as the 48 yard line. It is a chilly morn and will remain cool for the practice session today. You won’t hear me complain about that either. The first players out this morning are Ben Garland, Brock Osweiler, Cameron Kenney, Ramzee Robinson, Cyril Obiozor and Jamie Blatnick getting some early work in. This will be a full pad practice, for which I am glad. HORN.

The Walk through segment begins against the Scouts. The fake Referees are here today. When the Defense joins the Offense, Derrick Wolfe is at Left Defensive End in the 1st team base defense. Manny Ramirez continues to work at Right Guard and I believe he will stay there. The stretch interval comes and goes, the the individual position drills commence. I see Eric Studdesville riding the Running Backs again, making sure they "get things right." HORN.

The refs, chain gang and 40 second clock all begin their work day as 11 on 11’s begin. After Peyton Manning throws two incomplete passes to Eric Decker (one behind and one too far ahead), he dials it in with Matt Willis at the sideline. Then a pass to Jacob Tamme over the middle for 7 yards. Joel Dreesen makes a catch on a crossing pattern and then a swing pass to Knowshon Moreno goes for 8 yards.

Adam Weber completes two passes to Jason Hill, who is finishing strong in Camp. Caleb Hanie’s first throw intended for Mark Dell, is broken up by Tony Carter, who is himself having a consistent Camp. Caleb hits Cameron Kenney on a cross and then gives way to Brock Osweiler. Os moves around in the pocket and when the timer goes off in his head, throws the ball away. His next pass is complete to Gerell Robinson on a 12 yard slant. HORN.

The ball is set on the 41 yard line and it’s time to feature the running game. Willis McGahee is stuffed on the first play by Derrick Wolfe and Elvis Dumervil. Peyton passes for eric Decker , but Decker can only get a piece of it and it falls incomplete. McGahee runs for 4 yards, then Lance Ball goes for 10 yards. Lance’s next carry is stopped at the line of scrimmage. This seems to be a "Fool me once, but not twice" kind of segment, since the Defense seems to know what’s coming.

Caleb Hanie throws incomplete for Matt Willis and then Knowshon Moreno is tackled by Robert Ayers for a loss. Moreno’s next carry is good for 4 yards. Brock Osweiler tosses left for Xavier Omon, who bounces off contact at the line and gets 4 yards. Ben Garland, Jeremy Beal and Robert Ayers converge on Omon in the backfield on the following play. Xavier gets 7 yards on a Draw play, then Jeremiah Johnson has runs of 3 and 5 yards. Omon gets the last two carries, for 2 and 3 yard gains respectively. As the HORN blows, a major scuffle erupts, with Austin Wuebbels seemingly in the middle of it.

Adam Weber hands off to Knowshon, who gains nothing. Weber passes for Austin Sylvester, but Nate Irving breaks it up. Caleb Hanie hits Mark Dell and Irving collides with another defender and both drop to the ground. Irving is shaken up and a Trainer leads him off to the sideline. Nate returned to action a few plays later, so the coast is clear on that one. Hanie connects with Greg Orton and then dumps a pass off to Xavier Omon. Osweiler passes complete to Orton and then throws out of bounds intended for Mark Dell. Brock gets flushed from the pocket on the last play of the segment and throws it away. HORN.

Kevin Vickerson walks off the field looking woozy, but returns about 5 minutes later as the Special Teams use the field for more Kick Return drills. Meanwhile, Peyton Manning is doing some extra red Zone passing drills with Demaryius Thomas and Eric Decker. HORN.

The line of scrimmage is the 21 and the Offense is moving toward midfield and featuring the "No Huddle." Manning’s first pass goes incomplete because Eric Decker slips coming out of his route. Then Peyton connects with Joel Dreesen. Knowshon Moreno runs for 6 yards behind Jacob Tamme’s motion into the lead blocker role. Manning’s next pass gets thrown away and then Moreno runs for 4 yards.

Caleb Hanie gets the next rep running the No Huddle. He fails on a screen pass attempt for Xavier Omon and then hits Bubba Caldwell on a slant. Jeremiah Johnson rushes for 5 yards and then Weber enters the fray. Adam completes all three of his pass attempts, to Matt Willis, Greg Orton and Jason Hill. HORN.

Red Zone drills from the 20 yard line. Willis McGahee on a toss right goes nowhere but into the arms of Derrick Wolfe. Wesley Woodyard yells, "I see a Wolf!" Peyton Manning gets picked off by Rahim Moore on a pass meant for Chris Gronkowski, who didn’t run through the pass pattern. I’m not saying Manning is blameless, but the play didn’t look like it was run right either. Peyton hits Matt Willis on a cross and then Demaryius Thomas beats Syd’Quan Thompson for a catch.

Adam Weber is Sacked by Jamie Blatnick. On the next play, he hits Bubba Caldwell near the goal line (it may have been a TD). Weber passes complete to Julius Thomas and David bruton is there to make the tackle immediately. Brock Osweiler is Sacked by Jeremy Beal. Then the rookie hooks up with Mark Dell for a score. The ball is moved to the 10 yard line and Osweiler tosses a swing pass to Jeremiah Johnson, who runs it into the End Zone. Caleb Hanie turns Julius Thomas all the way around, but JT can’t handle the pass. There is a bad snap on the next play as well as an Offsides penalty. HORN.

The ball is on the 41 yard line now. Peyton Manning passes to Willis McGahee. Then Chris Gronkowski gets the rare Fullback dive for 5 yards. Manning hits Lance Ball running free after he releases from the wheel route he is running for a touchdown. Lance beat Wesley Woodyard on the play, so Knowshon Moreno and Willis McGahee give him a good razzing. Ball gets another carry, but is stopped by Mitch Unrein after a yard.

Caleb Hanie completes a pass to Virgil Green and one to Bubba caldwell. Then Knowshon Moreno gets 8 yards on a Draw play. Osweiler to Matt Willis and then Brock audibles and hits Greg Orton. Adam Weber hans off to Xavier Omon, who gets submarine tackled by Elliot Coffey. HORN.

The Special Teams does another segment with the Kick Return Unit with Matt Prater adding in a couple of surprise Onside Kics to keep the guys alert. No windshields were broken today. HORN.

Situational drill. The scenario is: 4th Quarter, 1:35 left on the clock. 1st and 10 at their own 35 yard line. No timeouts and down by 4 points. A touchdown is needed. Oh, and Manning is sitting this one out. Caleb Hanie is up. His pass for Bubba Caldwell is called for Defensive Pass Interference on Tony Carter. That puts the ball on the 25 yard line. Hanie throws the ball away and then gets Sacked by Jamie Blatnick. After hitting Matt Willis down at the 20, it’s 4th down. Caleb’s pass for Julius Thomas in the End Zone goes off the Tight Ends hands incomplete.

Brock Osweiler’s chance comes and he is sacked by Jamie Blatnick on the first play. I miss the next play because I’m taking a picture of Peyton Manning pulling the Gatorade prank on an unsuspecting young fan. Jamie Blatnick then gets his third Sack on the day. Brock can’t seem to get this drill started and has to throw the next attempt away. 4.7 seconds left and Osweiler has to try a Hail Mary after scrambling away from two Defensive Linemen. Syd’Quan Thompson intercepts the ball, ending the series. 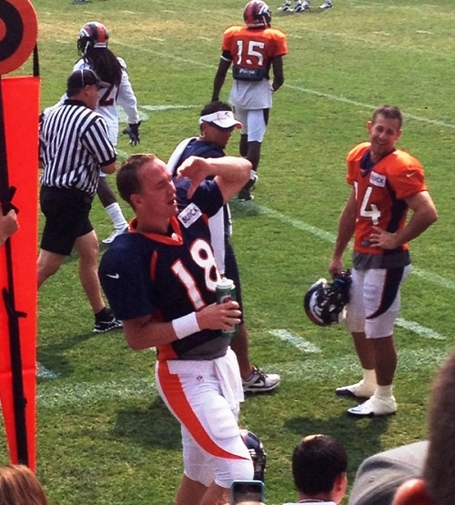 Photo by Kaptain Kirk 8/16/12
Adam Weber gets a last chance Hail Mary from the 40 yard line with 4 seconds left and hits Matt Willis for the touchdown.

And that ends the 2012 Denver Broncos Training Camp. For only the second time all Camp, Peyton Manning doesn’t sign autographs. It turned out that he had an interview obligation, so I utterly failed in getting his signature on a giveaway ball cap. I did get Jacob Tamme and Virgil Green to sign a hat and let it be known there will be plenty of prizes this year. In fact, I picked up a few last goodies at the team trailer on the way out.