Share All sharing options for: The Kaptain’s Quick Hits From Broncos Camp - 8/2/12 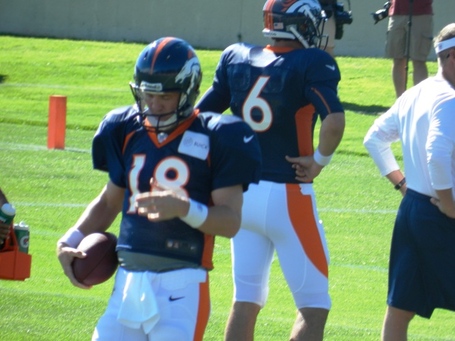 Day 8 is in the books and it was a good day today in Dove Valley. The Denver Broncos Training Camp practice went well and I got to meet up with a few members of the Mile High Report. I met Sayre Bedinger, Gary Funk (PearlJamBroncosGFunk) and got to sit with Troy (kentuckybronco) along with another record crowd of over 5,000 fans. There were quite a few things that impressed me in this practice, so let’s get to the sharing of it.

The newest Bronco, Wide Receiver Cameron Kenney is wearing the No. 19 jersey for those of you keeping track at home.

Ronnie Hillman, Orlando Franklin and Tyler Grisham were the walking wounded that came out in shorts, participated the stretch (a little) and then retired to the Locker room. Quinton Carter, Is still sidelined, along with yesterday’s casualties Joshua Moore (Hamstring), D’Andre Goodwin (ankle) and Greg Orton (ankle). The good news was that Eric Decker returned to practice today after straining his groin yesterday. Demaryius Thomas left the field under his own power, but returned a few minutes later. Robert Ayers came up holding his shoulder when he collided with Jeremy Beal in the backfield chasing Adam Weber. He shook it off and kept playing though.

Decker took it easy today, so Demaryius Thomas got a chance to shine and he did, catching a deep touchdown pass from Peyton Manning in between Drayton Florence and Rahim Moore. The fans in attendance thoroughly enjoyed that one. In fact, I think Bay Bay only had one drop if any today. One pass from Manning hit Mike Adams in the back, but Thomas had him beat deep.

I was also impressed with the overall play of all the Quarterbacks today. Yes Caleb Hanie had one pass that was worse than a punt protector, but for the rest of practice, the tempo was great. Decisions were made and the ball came out. Each Quarterback had some very good throws and touchdown passes. The Defense got a few coverage sacks along the way, but the Offense had the upper hand for the majority of the practice.

The hurry up Offense made an appearance today and both the first and second team moved the ball. Manning did not have a touchdown pass because of an Offensive pass Interference call on Demaryius Thomas.

Jacob Tamme had a nice one-handed catch on a fade in the End Zone. The Running Backs practiced one-handed grabs from coach Eric Studdesville. Willis McGahee and Knowshon Moreno seemed to be the most adept at it, catching the ball with the palm of their hands. None of the RB;s had any drops in the drill though.

Right Guard Chris Kuper scaled back his reps a little for this practice. However, I don’t see it as a setback, rather a respite. Or maybe a chance for Manny Ramirez to get more reps with the 1st team. That would give him the edge as the O-Line swingman.

Playing with the 1st team Defense today was Jason Hunter at End. At Tackle, Mitch Unrein and Derrick Wolfe got the reps with the 1st string boys. The second team D-Line had Robert Ayers and Jeremy Beal working at the End positions. Ty Warren and Kevin Vickerson, who really is "Big Vick" again at the Tackle spots. There was a rotation going on so I’m sure there was overlap.

Willis McGahee had a pretty good day running the ball. He caught a few passes out of the backfield and added a few yards after the catch too. Knowshon Moreno had a few decent runs and catches. Jeremiah Johnson looked as consistent this practice as he has in the others (a good thing). Xavier Omon had the best run of the day, taking a handoff from Adam Weber and rumbled for about 5 yards, bounced off a would-be tackler and ran for another 8 yards.

That will have to tide you over for now. We will continue this discussion later.