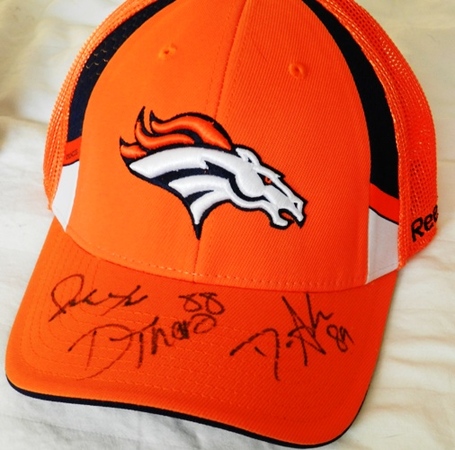 What an exciting time to be a Bronco fan. The Broncos enter the 2012 season prepared to defend their 2011 AFC West title. We saw them win their first playoff game since 2005 with an electrifying overtime win over the defending AFC Champion Pittsburgh Steelers. Now that Peyton Manning has been added along with other new players, 2012 promises to be just as exciting.

Those of you who went on that wild ride with the rest of us here at MHR may remember that we ran a contest during the regular season. Each week a Reader would face off against a Staffer in a good-natured smack-talking attempt to out-predict one another in regards to which teams would win that week. You may remember, if you followed all seventeen weeks of the contest that the Readers edged the Staffers in total predictions by just a single game. Way to go, Readers.
This season, our predictions contest will be back, largely due to the largesse of Kirk Davis who intrepidly attended training camp sessions and stood amidst thousands of fans to secure signatures on hats.

So, once again, we will have a Readers vs Staffers Swag Contest. Take a jump with me and see how this is going to work.

Up until last year, MHR had the tradition of having the members of the staff vie against one another in making predictions for each week's slate of games. Two years ago, the staff gave me the rather dubious honor of preparing each week's predictions. Last year, borrowing an idea from Randy Youngman who used to write a weekly predictions column for the Orange County Register, I created the Readers vs Staffers Predictions Contest.

The process will be simple: each week a selected Reader and a selected Staffer will each submit a list of predicted winners. A running tally for the season will be kept for bragging rights. Should the Reader correctly predict more winners than the Staffer, the Reader will receive a hat autographed by one or more members of the Denver Broncos.

If you'd like to participate, here's how it's going to work:

Step 1: email me at 2012mhrcontest@gmail.com

Please put "Predictions Contest" in the subject line. Emails will be accepted until 5:00pm on Saturday, September 1, 2012. Please note: multiple emails will not increase your chances of being selected as each name will be entered into the drawing only once.

Step 2: Please include a preferred email address with your entry

An email confirming your entry will be sent to you.

Step 4: The lucky winners will be announced in a follow-up article.

They will also receive an email with detailed instructions regarding how to submit their picks for their assigned week (weeks will be assigned by the order in which the names are drawn . . . i.e. the 1st name picked will get Week 1, the 2nd name Week 2, and so on).

Step 5: Each week's winner (be it Reader or Staffer) will introduce the following week's contest article.

If a Reader has won, that Reader will receive an email request for a mailing address for the hat.

So, get your entry in if you'd like a shot at being picked for the 2012 MHR NFL Weekly Predictions contest.