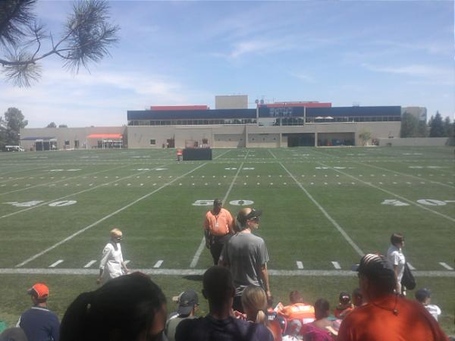 I'm back for my second straight day of Broncos training camp. This day was a bit warmer than yesterday (because it was afternoon and not morning), but it felt even hotter when I was standing in line for 2 hours before practice started.

Two hours seems like an extraordinarily long time... because it is. However, I realized that I needed to get there soon if I wanted to get a good seat. The radio was abuzz, this morning, talking about how a bunch of workers were probably taking the afternoon off so they could go to camp. With numbers expected over 5,000, I figured 2 hours should be good enough. I wasn't even close to the front of the line. I was about 80 yards from the front of the line, which was fine. I got a chance to talk with some really cool Broncos fans. I instructed a few first timers about the good places to sit and the prime autograph strategies. They didn't know that it was only my second day. They only knew I had been there before.

Anyways, Kirk and Sayre were running a little bit late, so I took the liberty of saving seats along the 50 yard line (as shown above). I'm telling you this, right now... Kaptain Kirk is a rockstar at training camp. Pretty much everyone we talked to mentioned reading his article before coming out. I don't blame them. He's a master at taking notes and it's super cool to be able to sit right next to him and see how the sausage is made. I tried to help out, when I could, by keeping a line of communication open to cover multiple position drills at the same time, but he pretty much has things down to a science.

Player of the Day

With very little question, it had to be Jeremiah Johnson. That's right. Not Demaryius Thomas (although he did have a pretty solid day) or even Peyton Freaking Manning. Jeremiah Johnson had the crowd cheering loudly on 3 separate occasions, something no other player achieved. One of the plays was featured on denverbroncos.com, where he did a spin move in the backfield and bounced it to the left side before turning the corner. In real game action, it probably only goes for 3 or 4 yards, but the crowd was extremely happy about that spin move.

Another fan favorite was a designed run to the right side. Jeremiah hit the hole and saw that it was closing up. He stuck his foot in the ground and cut it left, across the entire defense, behind the defensive line and in front of the linebackers. He ran for 25 yards and was pushed out of bounds right in front of the crowd before being barraged with cheers and screams. "Good work, JJ!!!", shouted one fan to my right. He was correct. It was very good work. That play happened right as the horn blew, so the crowd continued cheering for Jeremiah "You ever skin a grizz'?" Johnson...

He went over to coach Eric Studesville, who using hand motions illustrating his cut back to the left side of the field. I couldn't hear what they said and I'm not talented enough to read lips, so I won't assume to know whether he was pleased or not with the run. The crowd was, though. It was a 5 yard gain before the cutback and a 25ish yard run afterwards.

Today, I was blessed to receive some extraordinary autographs. As many of you know, I am from Kentucky. That's why my articles are titled "KB" something, by the way. I was formerly known as "kentuckybronco". Another thing that you newcomers may not know about me is that I grew up in northern Kentucky (near Cincinnati) and am a student at the University of Louisville, Elvis Dumervil's alma mater.

The defensive linemen were signing things during this afternoon's practice, so I had the wonderful privilege of meeting a few of my favorite players. The first, of course, was Elvis Dumervil. I waited patiently as he signed autographs for some kids. Of course, rule number 1 of autographs is that kids are first. After he had signed for the kids, I had my chance. I pulled out my University of Louisville student ID (Cardinal Card, as it's known in my circles) and said, "Hey Elvis! I came from Louisville to see you. I brought my cardinal card and everything." Doom was in autograph mode, with his head down, but after I said the magic words and flashed the cardinal card up in the air with my hat, his ears perked up and he looked straight at me, smiling, and said, "that's a long way." He grabbed it, signed it, and I said thank you.

About 15 yards to the left, I saw Derek Wolfe. He is very approachable and engaging with the fans. Every time I've ever seen him, he has had a smile on his face. Today was no different. I went over and made sure to follow rule number 1 of autographs. After patiently waiting my turn, I told him the same thing I told Dumervil, minus the Cardinal Card. I told him I grew up in Florence, KY and he replied, "Ah, I know where that is." I said, "if you need a ride home, I'm headed that way. Let me know if you want to carpool." He chuckled.

I traveled 1200+ miles from Kentucky to Broncos training camp and was blessed to receive autographs from Elvis Dumervil and Derek Wolfe. Could this trip get any better? I'll let you know after tomorrow's scrimmage at Mile High. 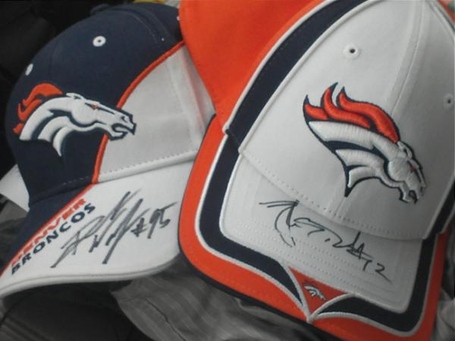 I hope to see some of you tomorrow at the stadium.