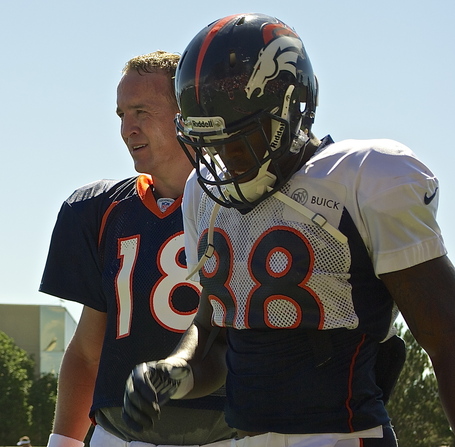 Another year, another training camp come and gone for the Denver Broncos...At least as far as I'm concerned. That's the phrase my dad says every time we walk out of the gates and make the seemingly long trek to our vehicle after the last practice we decide to attend.

This year, there was something just a little bit different about camp. I've been coming to Broncos training camp ever since I can remember, which seems to be back to the 2001 or 2002 year of camp. I remember meeting then first round pick Ashley Lelie all the way up to watching Tebow-mania last year, but I've never quite seen anything as remarkable as this.

For the first day we were at practice, my dad, my brother Bryce, and myself were among the 5,000 plus that set a record for a single day of Broncos training camp. I had the opportunity to shoot the breeze with fellow MHR staffers Troy and Kirk for a brief bit before the practice started, but when the gates opened, I re-joined my family in line and we made our way to about the 42 yard-line, front and center.

After assuring our seats, my brother and I headed to the team shop which doesn't have as broad of a selection as usual, and oddly enough we were the only ones in there besides the workers. Since we had already purchased various things from the stores we'd been to in the days prior, we each purchased a New Era cap and headed back to our seats to watch the players come out of the locker room.

After hearing rumors about the roars that the crowd was able to generate as Peyton Manning trotted onto the field, I will admit I was a bit jealous when I was only able to clap due to my painful head cold, but it was an amazing thing to be part of regardless.

As the Broncos got started with practice, it was much of the same that I was used to. Getting the punt teams lined up, doing walk-throughs and shooting punts through a jugs machine at various return men, which this year was led by Eric Decker, Syd'Quan Thompson, and a couple of other guys. I'll admit, I was not interested enough in this portion of practice to pay much attention. It was either that, or these two crazy girls with their faces painted wearing some of the oldest Broncos hats I've ever seen running up and down the sideline with the permission of the "orange shirts" or security guys. The girls were trying and succeeding in getting the crowd to do the wave at about eight in the morning. Not only that, but they were letting out a loud shriek with every word that came out of their mouth. If there was a moment of minor action, these girls were cheering for it.

That was a pretty entertaining start to practice, but when it really got started was after the stretching period, where about 5,000 people stood up with the team as they did some warming up and stretching, which felt good after sitting and waiting for about an hour or so.

When the horn blew and the teams broke off into their individual groups, the position closest to me was the wide receivers. For whatever reason, Demaryius Thomas was not there participating originally, but he eventually showed up and joined the guys for some timing and footwork drills, as well as some work with getting out of bump coverage.

I'm always in awe of how big the players are, no matter how many times I see them. It's actually quite impressive to see guys like Brandon Stokley with so much consistency in this league when so many receivers now are the size of Eric Decker and Thomas.

It seemed like time slowed down as the Broncos continued individual drills and walk throughs before they started playing some actual football. This is where I became instantly entertained and intrigued. Although the time for my viewing was short, what I saw was powerful. Here are some hits from what I saw on the field, and what I'm looking forward to.

Overall, it was a great trip to camp for me and my family this year. I was able to come home with some new Broncos swag, as well as some new great memories. Here are some other photos I took this year at training camp for your viewing pleasure. 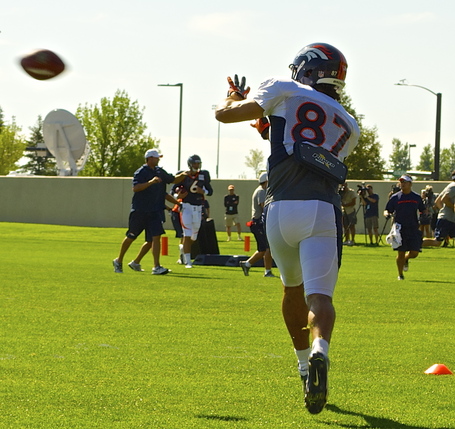 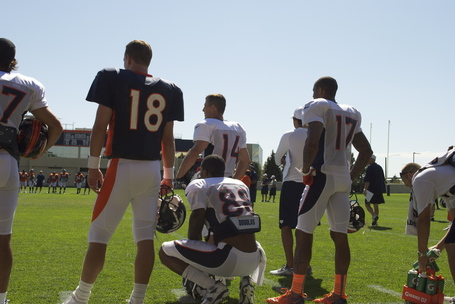 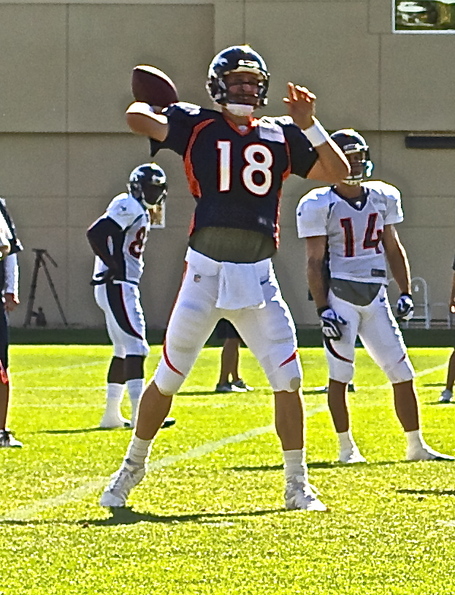 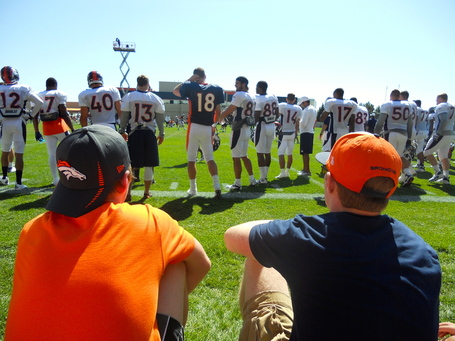 The view my brother and I had for most of camp. 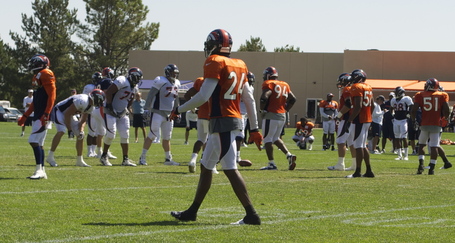 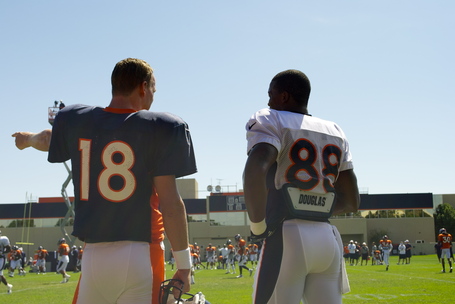