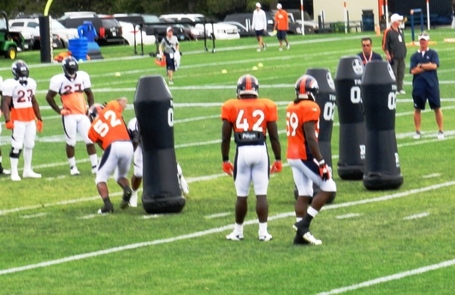 It was a very hot practice at Dove Valley this morning. I’m talking about dripping sweat at 8:30 AM and I’m just sitting here taking notes. Oh well, at least there is no lightning.
Today’s practice went better than yesterday, unless you are into brawling Linemen. Practice ran smoother, not perfect, but with less hiccups.

Not practicing today were Ryan Harris, Tyler Grisham, Justin Bannan an d Greg Orton were on the sidelines in shorts. Ty Warren left during practice with flu symptoms.
The newest Bronco, Linebacker Keith Brooking wore a No. 57 jersey, participated in stretches and appeared to be itching to hit the field.

Manny Ramirez saw time at Left Guard with the first team Offense today during the first 11 on 11 segment. It appears as if the team is creating different looks in order to decide who the utility linemen will be on the 53 man roster. Orlando Franklin took a few reps at Right Guard with Chris Clark playing at Right Tackle. Chris Kuper is still getting spelled at Right Guard, but he has been playing quite a lot, which is good news.

In the Nickel set. Ty Warren and Kevin Vickerson were two of the three players who went out, while Derrick Wolfe, Mitch Unrein and Chris Harris came in.

The passing drills were more rapid fire up tempo than previous practices have been. Like the Quarterbacks were cramming as many reps as they could into that practice segment.

Running Back Jeremiah Johnson had another very good showing today, ripping off 15 and 20 yard runs more than a few times.

Wide Receiver Mark Dell made some good catches and was consistent for the entire practice. One of his better efforts.

Wide Receiver Matt Willis stood out as well and is putting together another good Camp. This puts him in the best situation to make something out of any playing time he gets during the season. Willis also looked good at Kick Returner today.

Caleb Hanie had a bright moment, reeling in a bad shotgun snap, keeping his concentration and composure, then making a quick decision and accurate pass to Virgil Green for a touchdown.

Willis McGahee and Lance Ball drew praise from Peyton Manning for being in the right place when running their pass routes. Small wonder why they are listed one and two on the depth chart. Not because Peyton says so, but because he can trust them to be where they’re supposed to be.

Cameron Kenney, David Bruton and Anthony Perkins all three tipped a pass in the End Zone, but none of them could come up with the catch even though they all touched the ball. The only thing missing was a Volleyball net.

Rahim Moore made some good defensive plays today. So did Wesley Woodyard. Duke Ihenacho dropped a pick six opportunity that hit him square in the hands.

Von Miller, Derrick Wolfe, Cyril Obiozor had one Sack apiece. Malik Jackson and Ferry Franklin shared a Sack. Mitch Unrein, Wolfe, Von Miller, Obiozor and Malik Jackson pressured the Quarterback at different times during a practice where the Defense had the upper hand.

Philip Blake had a bad snap that Brock Osweiler had to dive forward to recover. Brock made a nice touchdown pass to Gerell Robinson on a fade pattern. Tony Carter intercepted Osweiler during the two minute situational drill late in the practice session.

Gerell Robinson elevated to make a grab and Anthony Perkins submarined him. Robinson got the wind knocked out of him on the hit.

The Offense had mixed results during the live situational drills. Given the oppotunity to run out the clock while holding the lead with 1:23 remaining in the game, Knowshon Moreno puled a Marion Barber and ran out of bounds after catching a pass. The Defense let him know all about it too.
As stated above, Brock Osweiler was intercepted to end the 3rd team’s chance. Adam Weber hit Cameron Kenney for the only touchdown during the situation drills.

Well, that should hold you for awhile, so I can make the drive home.