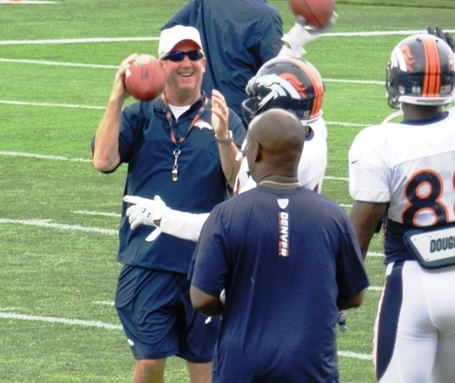 My viewing spot is the 49 yard line for this morning’s practice. Practice hasn’t even begum yet and it is freaking hot already. Two Jugs machines are set up at the 45 yard line as the crowd waits for the Bronco players to emerge from the Locker room. Ronnie Hillman is back at practice. but he will not do anything past the position drills. Ryan Harris is on the sidelines in shorts, so is Tyler Grisham, Justin Bannan and Greg Orton. All the other players are in Full pads. HORN.

The two Jugs machine’s fire Kickoff attempts towards the corners of there respective sidelines. It appears like the Offensive and Defensive Linemen are getting to shag Kickoffs. They are lined up like basketball players doing lay ups before a game.

Five minutes later, the players move to the sidelines for another drill. A coach rolls a football down the sideline about a foot inside the line and the player is supposes to field it cleanly. HORN.

11 on 11’s against the scouts. Short and medium length passes are the plays being ran so far. It looks like Manny Ramirez, who is working at Left Guard right now. My interpretation of that, is the team is still looking for a swing man on the O-line. I also see that Ty Warren and Derrick Wolfe are working with the 1st team at Defensive.Tackle.

Keith Brooking, Denver’s newest Linebacker, is wearing No. 57 and in shorts observing practice.

Time for stretching and then Tracy Porter breaks it down for the team. Now it’s off to the individual position drills. Bubba Caldwell is wearing knee high white socks paired with a denim blue colored cleats with orange shoestrings. Talk about a fashion statement.

During passing drills with the Running Backs, Willis McGahee and Lance Ball earn earn some praise from Peyton Manning for being in the right. HORN.

The Offense lines up at the one yard line to break out of the end zone. Peyton Manning hands the ball off too Willis McGahee, who gets 6 yards. Joel Dreesen catches a pass on the next play and Head coach John Fox calls for the 2nd unit to substitute in. All three units run the drill competently. HORN.

Caleb Hanie hits Jason Hill with Danny Trevathan in coverage. Hanie’s next pass is complete to Mark Dell. Adam Weber should have been intercepted by Duke Ihenacho because the ball hit directly in Nacho’s hands. Definitely a missed chance for a pick six. Brock Osweiler barely overthrows Cameron Kenney. HORN.

A 9 on 9 matchup featuring the Running game is next. The highlights were Rahim Moore riding Knowshon Moreno to the ground and out of bounds, The coaches didn’t need to tell Rahim to finish the play. Jeremiah Johnson had a six yard run and another that went for at least 20 yards. HORN.

The scenario for the first situational drill, was 1st and 10 at the 40 yard line. 4th Quarter with 2:29 on the clock. The Offense is up by 6 points and they have one Timeout. The goal is to get a 1st down and run out the clock.

Willis McGahee gets 4 yards and that takes them to the 2 minute warning. McGahee picks up two more yards on each of his next two runs, leaving 4rd and 2. Turnover on downs after a one yard gain.

Adam Weber leads the second unit. Knowshon Moreno gets a yard. On his next carry, he is tackled in the backfield by Nate Irving. On 3rd and 11, Moreno takes a toss left for 6 yards and then runs out of bounds in a mistake not seen since the Chicago game last season. The "Three’s" get their opportunity. Brock POsweiler hands off to Jeremiah Johnson and he runs for 22 yards and a 1st down. And the clock keeps ticking. After no gain on the following play, Jeremiah runs for 7 yards and time expires. Mission accomplished. HORN.

The rest of the practice consisted of another situational drill and two more 11 on 11 scrimmage sessions with a Special Teams segment in the middle. I hate to cut this short, but I am dead tired after getting stuck in traffic because of three separate car crashes. Another Morning practice is scheduled for tomorrow, so I am going to rest up.