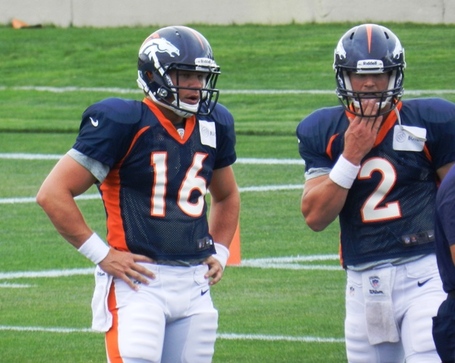 Showing up early to the Denver Broncos Dover Valley Training Complex, I manage to obtain the same spot as yesterday, the 49 yard line. A member of the staff informs us that there will not be an autograph session at the end of today’s practice. We already knew this would be a short session as the team will be traveling to Chicago this afternoon for a game against the Bears tomorrow. Can you believe it? Bronco football is here!

At 8:45, the Offense emerges in shorts and jerseys, sans helmets. They are set up across from the crowd, over on the opposite field. Perhaps the coaches want a little privacy during their walkthrough. I don’t mind, but it seemsedo bother the gentleman next to me. He was grumbling about the Broncos not being "fan friendly." So I remind him about the fact that sure, it’s entertainment, but the team is also chasing a championship. How friendly do you expect them to be? They allow us to come to Training Camp for free. They sure don’t have to do that. In fact some teams (Chargers) don’t allow an autograph session at all.

Anyways, as the Offense finishes up their walkthrough, the Defense emerges from the Locker room and they are in shorts and shells with helmets. The Offense yields the field and retires into the building to gear up. Now the Defense takes part in their own walkthrough segment versus the scout team. The segment clock for practice is off and I set my resolve to not hearing the ever familiar HORN.

But wait. One of the ball boys is bringing the Chains out. The crowd will get to see a bit of practice. My early morning reconnaissance mission will be worth it after all. Then all of a sudden, at 9:30, there it is. HORN.

The team spreads out across the field for their stretches. Four minutes later, JD Walton breaks it down and they disperse toward their individual position drills and continue to warm up. Bubba Caldwell is wearing ankle high blue socks today. He has paired them up with sparkly blue and white cleats. However, I think Gerell Robinson has bested him with his own Golden cleats.

As the Quarterbacks go through their passing drills with the Wide receivers, I hear a fan in front of me say, "Pro Bowl DT, Pro Bowl!" to Demaryius Thomas. Then a guy to my right counters with, "forget that. Super Bowl! Peyton Manning tells the guys to pick up the tempo with a "Let’s Go." HORN.

A 10 minute segment of 11 on 11’s begins with the 1st team Offense against the 2nd team Defense. Willis McGahee starts it off with a sweep to the left. Lance Ball gets two carries and then the 2nd team Offense gets a turn. Caleb Hanie is leading them today. He hands off to Knowshon Moreno twice and then Ronnie Hillman gets two carries. Brock Osweiler comes in to handoff to Xavier Omon twice and Jeremiah Johnson gets the last two carries. HORN.

The Offense and Defense swap sides and another set of 11 on 11’s continues with the 1st units going against each other. Willis McGahee rushes for a few yards. Then the tempo increases and Manning passes to Mark Dell out of Play Action. Hanie’s pass intended for Gerell Robinson is incomplete. Jeremiah Johnson gets two carries and Ronnie Hillman rushes twice with a Brock Osweiler completion to Gerell Robinson sandwiched in between. Adam Weber comes in and throws a middle screen to Xavier Omon and then Omon carries the ball on the last play. HORN.

Same thing on two. The units switch sides and continue 11 on 11’s. First team Offense vs. Second team Defense. Peyton Manning ‘s first throw is to Joel Dreesen down the seam. Then a screen pass to Willis McGahee is followed by a Lance Ball run. Eric Decker is the recipient of Peyton’s next toss and he finishes up with another completion to Joel Dreesen.

Caleb Hanie throws an interception to a scout Linebacker wearing No. 55 and Ronnie Hillman gets a scolding for his deficient pass blocking on the play. Osweiler passes to Matt Willis and then hits Knowshon Moreno on a curl. Brock’s final pass goes to Xavier Omon. Adam Weber sends a high pass to a leaping Mark Dell. Weber’s next pass is tipped by Cyril Obiozor, but Cameron Kenney is in position to make the catch. Adam passes to Gerell Robinson and Eric Studdesville loudly reminds Jeremiah Johnson of his responsibility on the play. HORN.

First teams 11 on 11’s. Peyton Manning completes passes to Brandon Stokely downfield and Lance Ball with a dump off. Caleb Hanie just misses Mark Dell on a pass over Tracy Porter. The next play is a Draw to Xavier Omon, then Jason Hunter gets a paw on a pass and bats it down at the line.

Brock Osweiler throws an incompletion to Mark Dell (bad throw). Brock waits too long on his next dropback and Robert Ayers is there for the Sack. He sidearms the throw and Nate Irving breaks up the pass anyway. Adam Weber tosses a short pass to Ronnie Hillman. A pass intended for Mark Dell is broken up by Duke Ihenacho. Weber’s next completion comes out of play action. He connects with Cornelius Ingram. After a nice catch by Jeremiah Johnson, Gerell Robinson can’t reel in Weber’s back shoulder pass on a deep sideline go route. HORN.

11 on 11’s resume going back in the other direction. Ben Garland bats the first pass attempt by Manning down at the line of scrimmage. Manning hits Joel Dreesen deep down the seam for 25 yards. Willis McGahee carries the ball over the right side and then Peyton and Dreesen connect on another 10 yard pass.

Caleb Hanie completes a 15 yard pass to Bubba Caldwell and then Lance Ball on a flare to the left. Caldwell is the recipient of an inside out bubble screen, good for 8 yards. Brock Osweiler passes too late for Ronnie Hillman and the play is broken up by a scout Linebacker. The line of scrimmage is set at the 5 yard line. Adam Weber hits Chris Gronkowski in the flat and then throws a touchdown pass to Gerell Robinson. Xavier Omon runs 5 yards for a touchdown twice. HORN.

The two units switch sides for the final time. Willis McGahee gets a pair of carries. Then Caleb Hanie’s pass attempt for Cameron Kenney is broken up by none other than Elvis Dumervil with a swat. Jeremiah Johnson runs for 5 yards and then Hanie is intercepted for the second time by Omar Bolden. Jeremiah Johnson rushes twice more and then Osweiler comes in. Ronnie Hillman gets two carries. Brock holds on to the ball too long and sidearms it complete to a receiver. Xavier Omon receives the final two carries of practice and the final HORN sounds.

With no autograph session, I am able to get this posted early. Enjoy.