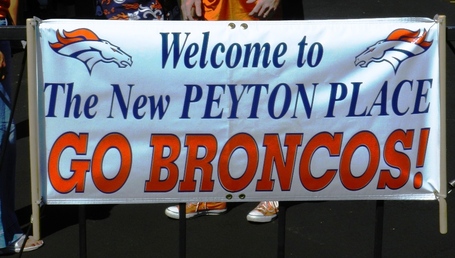 What a way to open the season Denver Broncos! Back to back wins over the Pittsburgh Steelers make for a joyful Broncos Country. It kind of sets the tone for your work week doesn't it? Admit it, you've got an extra bounce in your step this morning don't you?
Peyton Manning added to his already resplendent resume, with his 400th and 401st touchdown passes. That put him as the third Quarterback in the history of the NFL to break the 400 mark. Brett Favre had the most at 508 and Dan Marino is second with 420. After one game in a Broncos uniform, it is easy to think Manning can overtake Marino for second place. Peyton has thrown a minimum 26 touchdown passes in each year he's been in the league and for the record, that 26 TD effort came as a rookie. He has actually averaged 28.5 per year.

Yes it's only been one regular season game. And yes, the mighty Manning could have a season (or career) ending injury before the season ends, but right now the Denver Broncos have the greatest Quarterback since 1999 playing in the Orange and Blue uniform in the Mile High city.

He will personally admit that he is not at 100% yet and he may never be, but Peyton's mind remains sharp. He can still dissect a Defense with the precision of a vivisectionist.

There were times in last night's game that got me all tensed up, but I thoroughly enjoyed the game of cat-and-mouse that Manning played with Pittsburgh All-Pro Safety Troy Polamalu. The free ranging Polynesian came up to support the run, helping the Steelers hold the Broncos Running game to a 3.5 average. When Troy did that, Manning countered with a pass play to the open part of the field that Polamalu vacated. When the Steeler DB lined up deep to defend the pass, Peyton would audible to the run. Those runs went for 8 and 9 yards too and caused the Pittsburgh Safety to line back up in the box to stuff the run. When Troy showed blitz, Manning would bring one of his Receivers over to block him and convert anyway.

However, Peyton did miss a call and ended up taking a Sack. After calling Knowshon Moreno to pass protect on the left side, Linebackers Jason Worilds and Lawrence Timmons both blitzed. Moreno couldn't block both players and took care of the inside man which was Timmons. That left Worilds with a free shot at Manning. That only happened once though and the Broncos were called for an Illegal formation to boot.

Peyton finished the day going 19/26 (73.1%) for 253 yards, 2 touchdowns, No Interceptions and a 129.2 Rating. He did get Sacked twice and absorbed a big hit on the second one, but bounced back up none the worse for wear. Manning even ran the ball, scampering 7 yards and out of bounds for a first down on one play.

There were too many penalties taken, but the Broncos overcame most of them. Most assuredly because Mile High is the new Peyton's Place.