I have to come clean here. I really thought the AFC West had better teams heading into the 2012 season than they have shown so far. To say that the Sunday games weren't a great showing for the Chiefs and Raiders is a gross understatement also magnified by the fact that both lost to relatively mediocre teams. The Chargers, on the other hand, blasted out 38 points in a game where they really didn't want to share the ball.

It's not that I want to watch any of our AFC West teams succeed but there is something to be said for playing in a division that doesn't constantly rank in the bottom two of the NFL. I realize the Broncos have been a part of the "bad" AFC West over the past couple of seasons but we seem to have come storming out of that, while some of the rest of our division just continually stays mired in it. As a Broncos fan I want to see the Broncos win a division full of respectable teams instead of one where half of the division organizations rank in the bottom 20 of the NFL. It's good for rivalry to have good teams in your division.

The way this season has shaped up so far doesn't give me much hope for that dominating division dream. It does, however, give me great hope for this Denver Broncos team as half of their division has already dug themselves into a 0-2 hole and their third rival, the Chargers, have ho-hummed their way to a 2-0 start. Not one of our division opponents has faced a team even close to the talent level of the Steelers or the Falcons. If the Broncos walk away from the Georgia Dome with a win our 2-0 carries far greater weight than that of the Chargers. (Edit: Obviously I wrote this before the Broncos game and a 2-0 start this season is not our reality. More on that to come.)

Take a look at this picture. 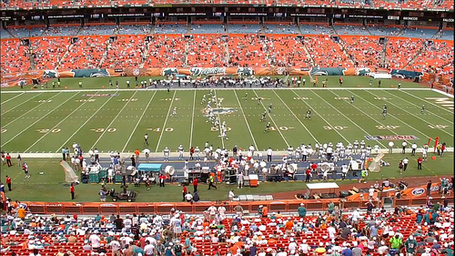 This is the Miami Dolphin's stadium just as the 3rd quarter is about to get underway. Now, I understand that just coming off the end of the first half people are beginning to make the first of many bathroom runs and that if I showed you a picture of any restroom it would stand in stark contrast to this one... but the truth is the Miami Dolphins home crowd looks pathetic. How can a town with a pro football team fill a stadium like this? I know it's Miami but come on! It's a shame for them too because their new QB Ryan Tannehill came out looking very sharp and then when he began to backslide into his rookie ways Reggie Bush turned it on in a career performance at home.

The Raiders, on the other hand, turned in another weak performance against a team that, on paper, has inferior talent all across the board. That superior talent the Raiders were supposed to be sporting, well, it looked terrible. Like Juan Castillo tupee terrible. More terrible than Mark Davis's hair terrible.

The Chiefs, playing in Buffalo about an entire country north of Miami, looked even worse against a team that everyone's favorite punching bag, the New York Jets, destroyed the week before. The Chiefs I don't really get but kind of do get. Their roster has talent. Jamaal Charles has a career yards per carry of nearly 6! Backing him up is Madden 12 coverboy Peyton Hillis whose job it is to bruise the other 4. Those are two dangerous offensive players. Matt Cassel, their quarterback, contrary to unpopular belief, is not a dangerous offensive player. The Bills put the Chiefs into a perfect situation. They made Cassel start throwing and start throwing often. Why, even with half a game left to go, the Chiefs decided their running game was unimportant enough to let Cassel air it out all day is beyond me.

Heading back down the coast, the Raiders QB Carson Palmer just couldn't seem to find his rythm... something I'm not yet convinced he actually has with this team. Once again, to be honest, the pricetag that was required to emancipate Carson Palmer from the Bengals factors into nearly every snap he takes and isn't a great way to value Palmer's play... but at what point do the Raiders accept reality start down the Jets route. A little wildcat with Terrell Pryor perhaps? The Raiders have got to find a way to get more playmakers on the field. They have a fullback in Marcel Reese that poses more of a threat than many of their wide receiver options.

McFadden, I know, he's still there for Oakland. Coming into this season the scouting report on McFadden was that if he could remain healthy he had a real shot at MVP. Maybe he still does but my guess is that he'll just have those MVP games against the Broncos like he does every year and spend the rest of the season diving into piles of large men for three yards. McFadden looks like he's playing hurt or afraid of getting hurt. He dives when he should be breaking outside and doesn't run with near the power through the seam like we've seen him have in the past. Now, there are apparently two ways to effectively neuter the Raiders offensively and they are 1) take out their long snapper Condo and 2) stop Darren McFadden. McFadden has to trust his feet at some point because Mike Goodsen isn't going to get the Raiders to the Fiesta Bowl.

Defensively the Raiders held their own until Bush broke their spirits like they haven't been broken since G.W. Bush got re-elected (ahem, sorry, California joke). Even still, defense does not seem to be the big issue for the Raiders at this point. The same cannot be said for the Kansas City Chiefs.

Swinging back across the country to San Diego the Chargers welcomed in the Tennessee Titans like a starved lion welcomes the buffet at Golden Corral. The Chargers took care of business at home in yet another game where they won in such boring fashion you wonder if they've really been challenged at all to this point. The Broncos don't face the Chargers until week 7 where they will actually head into Qualcomm Stadium and by then the Chargers should have their starting RB Ryan Mathews back. This Charger offense has yet to be truly tested yet and have made it work without their versatile back but they will no doubt welcome him in just in time to take on the tougher parts of their upcoming schedule.

The Chargers beat the Titans 38-10 in a game where they netted 416 yards to the Titans 212 and had possession of the ball for 43:39. Speaking of offensive powerhouse, did everyone see our ex-TE Dante Rosario catch 3TD passes? Talk about a great game for him. I'm spending at least $40 bucks to claim him on Tuesday off the waiver wire. Not speaking of offensive powerhouses, did anyone see Eddie Royal on Sunday? He had a great stat line. 2 receptions for 18 yards with a long of 20.

The Chiefs fell to the Buffalo Bills 35-17 but anyone watching the game knew it was more like 35-3 as Cassel threw a couple of garbage time touchdowns that brought back some nostalgic memories of the 2010 Denver Broncos. The Chiefs and Scott Pioli are going to have to figure things out on the fly. I'm pretty sure Arrowhead Pride is about to rename their postgame thread from The Best and The Worst to simply The Worst and The Worster.

The Raiders were beaten in Miami 35-13 where they were blown out by a rookie quarterback and a some dude named Reggie Bush. I can't remember a time in my recent history where I haven't ended anything I've written about the Raiders without saying something to the effect of "they are rebuilding and trying to find a new identity" and that sounds like a nice way of saying that they really suck right now and hope to get better so I'm going to stick with that. However, one look at their upcoming schedule and you begin to wonder if the Raiders aren't looking at a 1-9 or 0-10 start with the skill they've shown so far and their one win may be against the Chiefs, who also might be looking at a 1-9 0-10 start!