This Sunday at Sports Authority Field at Mile High, the Denver Broncos will enshrine legendary Wide Receiver Rod Smith as the 23rd member of the Ring of Fame.

The 3rd week of Broncos season is upon us, which means another MHR Contest. The Denver Broncos host old friend Gary Kubiak and the Houston Texans on Sunday afternoon at Mile High. Rod, Kubes, Rick Dennison, Elway and I would imagine, a few more of the old gang will be in attendance to witness the celebration. This will be a great day to be in the Mile High city, it's just too bad I wasn't invited.

Here is a piece of inside information: The Texans have the 1st ranked Defense and are favored by 2 points as of Wednesday.

So make your picks accordingly.

Last week's winner, Mile High Pride, opted to decline the signed Ball cap he won due to the uncleanliness of the circumstances. He felt that he shouldn't celebrate winning a contest when the Broncos lost. I respect that decision and it is time to move forward.

And once more, no one predicted the exact score, so the signed Von Miller jersey remains in play.

This weeks prize will be another Bronco Bucket filled with swag. 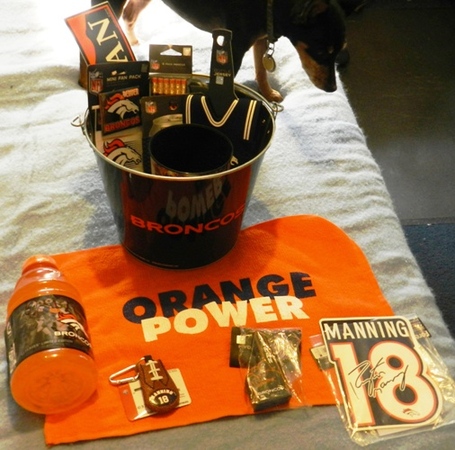 My dog Allie wanted to be in the picture, but I'm not giving her away. The goodies that come with the 5 quart bucket are:

The Gatorade is in lieu of a bottle of Terrell Davis BBQ sauce.

Here are the Ground Rules: