Share All sharing options for: Broncos Week One Prediction Contest 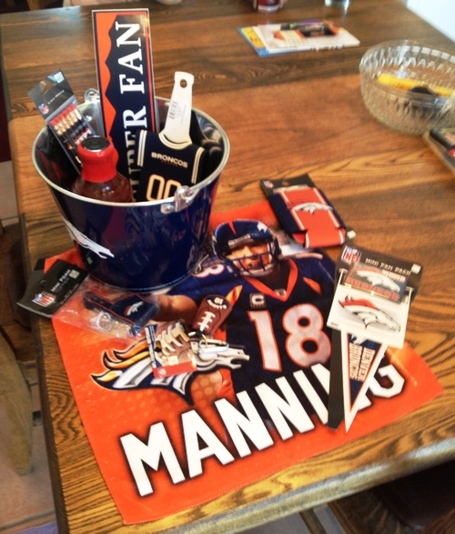 Hello Broncos Country! As a supplement to the Pick Em contest between the staff and 17 Mile High Report members, I thought we should give away even more cool Broncos gear. Due to the overwhelming response for MHR Coffee Mugs, more goodies were set aside for your opportunity to win. I think I have enough swag to make it through the season. There are eight more signed ball caps, a pair of signed mini helmets and some Bronco buckets, like the one above, which is to be the prize this week. If some fortunate soul happens to pick the EXACT score of any Broncos game during these contests, I have an awesome gift for you. 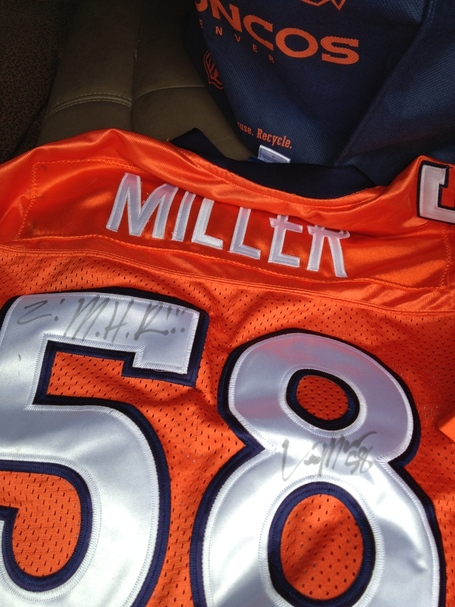 Yes. That is a signed Von Miller jersey that I procured during one of the last Training Camp practice sessions last month. It's a new Reebok stitched jersey that I purchased on sale in January. As I said, hit the exact score of a Bronco game this year and you will win this. If no one gets it right by the end of the season, we can have a drawing for the Super Bowl.

Now that the challenge has been set, here are the ground rules.

So let me tell you about the "Bronco Bucket," this week's prize.

First of all, we have a 5 Quart Blue Bucket with a Broncos logo that you can fill with peanuts or Mini Coronas on game day. Inside that are placed

Pretty good stuff if I may say so. Good Luck and...