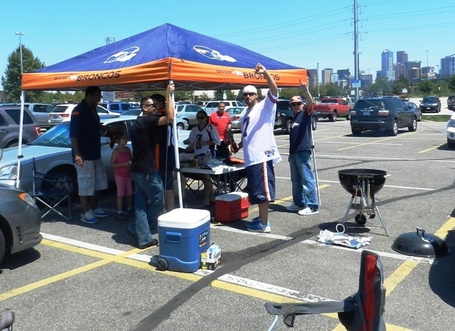 Another Denver Broncos football season begins this weekend. Time to pack up the grill and groceries and head to the Sports Authority Field parking lot for a pre game party. In this week’s Tailgate post, we’ll go over some essentials, show you a place where displaced Bronco fans can gather and have a chance at a ticket package, and of course, a recipe

Plan Ahead - Coaches don't wait until game time to plan their strategy, and you shouldn't either.

Pick a Theme - The week before the event, decide on a menu and what you want your buddies to contribute.

Prepare - About two days prior to your Tailgate, get your shopping, chopping marinating and blending done. You want to enjoy yourself, not spend the entire time toiling away. Get as much of the prep work out of the way as you can to maximize YOUR Tailgate party time.

Pack it up - No Tailgater should be without the essentials. A tool kit consisting of a box of knives, tongs, cutting boards, plastic bags paper towels and aluminum foil along with condiments and seasonings is a must.

Put em to work - Those buddies you just came to drink all your beer? Don’t let them just stand there, make them earn it.

Party - This is what it’s all about. A celebration of life, food and Football.

Purify - Tailgating can get very messy. So unless you are packing a sink, bring some of those disinfecting wipes. Better yet, make your own by mixing one tablespoon of bleach into a one-gallon jug of water. Put it in a generic spray bottle and you’re all set. Don’t forget the box of trash bags to speed up your clean up. Use Tupperware containers for leftovers, if there is any. There should be room in the cooler by then also.

According to Ruff's Barbeque Shoppe in Golden, CO

Barbecue started when lightning struck a tree and a burning branch fell on an animal. Along came a cave man who smelled the scrumptious aroma and took a bite. Mmmm.....Barbeque!

Fred's Mexican Cafe in Pacific Beach (San Diego), started as a Broncos bar last season and they are looking forward to continuing their allegiance to the Orange and Blue. Former Bronco Tight End Byron Chamberlain (1995-2003), is a good friend of the establishment and he has made appearances for last season and will do so again this season.

They are going to do Bronco trivia contest to win a pair of tickets to the October 15th Bronco vs. Chargers game. They always have great football specials such as $12 Miller High Life buckets and bloody marys & mimosas.

Come in every Sunday and receive a parlay sheet for the following weeks games. Receive a raffle ticket just for playing and more entries if you guess the winners. There will be a raffle drawing after the Broncos-Bengals game on November 4th. The Winner will receive 2 tickets to the December 2nd home game against the Buccaneers, 2 airline tickets, and 2 nights in a hotel. The only catch is you must be present to win.

That sounds like a pretty good deal to me.


Tailgate Recipe of the Week


After giving away a few bottle of Terrell Davis’ BBQ sauce, I had the chance to sample some of it myself. I like to experiment with different flavors when I make burgers and I developed one using the former Bronco MVP’s product.

For every pound of ground meat, I mix in:

Place the meat in a large enough mixing bowl to do the job. Add the ingredients and thoroughly mix. You have to get your hands dirty here. Form the mixture into a large mass in the bowl. Cover the bowl with plastic wrap and refrigerate for at least a half hour to marinate. If you are tailgating, form the meat into patties ahead of time and freeze until it’s grilling time. Otherwise, get cooking!

All that’s left is Buns or rolls, condiments and the fixings and it’s chow time.