The End Of Replacements? Huge Error In Broncos Game Means Deal Should Get Done

Share All sharing options for: The End Of Replacements? Huge Error In Broncos Game Means Deal Should Get Done

To this point I have been on the side of the NFL's replacement officials. That ended with their performance during Sunday Night Football between the Broncos and Pittsburgh Steelers. Sure, I could point to a missed 12-men penalty that wasn't called, or the phantom time out that Ben Roethlisberger was granted 1 full second after a delay of game. No, this was even more egregious.

With 10:34 to go in the 4th quarter, Peyton Manning completed a pass to Eric Decker at the one yard line. Decker lost control of the ball, but after he made contact with the ground. The Broncos hurried to the line of scrimmage and actually ran a play - but Steelers' head coach Mike Tomlin threw the challenge flag. He was, after the fact, awarded the challenge. The Broncos ran the phantom play at 10:18. While the officials were figuring out whether to grant the challenge, the clock ran down to 9:34.

The play was confirmed to be ruled correctly and the Broncos were given 1st and Goal from the 1. The play-clock should have been reset back to 10:18. It remained at 9:34.

Focus on when the Broncos ran the play that didn't count. That's when Tomlin threw the flag. 44 FULL SECONDS ran off the clock and were never returned.

Here is a screen capture of the clock during the challenge: 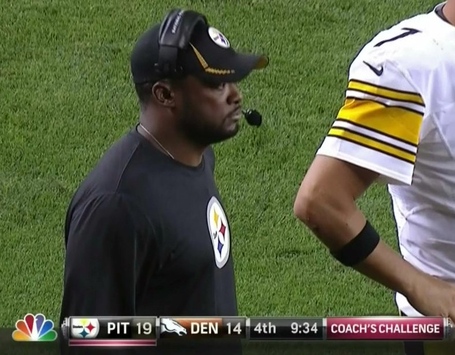 Did it end up making a difference? Not on the scoreboard. Tracy Porter made sure of that, but with 44 full seconds back on the clock when Pittsburgh started that drive, perhaps they are more patient.

One thing's for sure - the NFL needs to get the real guys back, and FAST!