Share All sharing options for: Top Broncos Plays of 2013: Atonement begins at home

How can a game so dominated by one side be decided by such a fluke?  Our Broncos had an entire offseason to stew about the results from that fateful day in January.  What it led to was the beginning of a fantastic journey that wreaked havoc on the record books...yet it all began on defense.

Forget Darrelle Revis and Richard Sherman.  Chris Harris Jr. is a men among boys.  His route recognition and closing speed are what makes his skillset so deadly in the slot.  Early in the 2nd quarter on 3rd down he used his prowess to undercut a crossing route to Brandon Stokley.

What makes this play work is the fake WR screen to Decker. His fake and pump by Manning will effectively hold the outside corner, the nickelback lined up across from Welker (Y), and also the Mike ILB. Once this happens the playside safety is dead in the water. He has two routes coming at him and must choose inside or outside. Initially he floats to the outside to cover Welker on the wheel leaving Julius with absolutely no one on him. By the time the ball is out, it is too late. Easy touchdown. 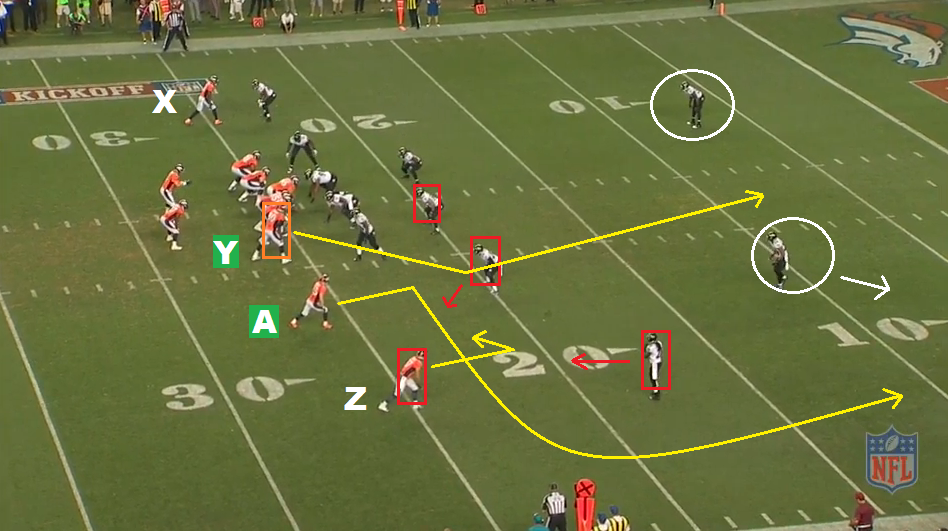 This would be but one of a record setting seven touchdown passes lobbed by Peyton Manning.  While Manning, Julius Thomas, and the offense hummed on all cylinders after this point, it was no coincidence that it took the offense and defense working together to right the wrongs of football past.  Quoth the Ravens....nevermore!