The Broncos have two absolute studs at the starting outside linebacker positions, and a third seeming rockstar waiting in the wings.

The change in emphasis across the NFL from the importance of inside linebackers to outside linebackers has been directly proportional to team's offenses becoming more passing-focused. Gone are the days of the three-down Mike linebacker, of the Brian Urlachers and Ray Lewises and Al Wilsons. For the most part.

Instead, teams find themselves focused on their weakside and strongside linebacker corps as staples of their pass defense. Putting pressure on enemy quarterbacks and covering opposing tight ends are premium qualities for linebacker in today's NFL, along with a knack for making big plays.

The Denver Broncos have two bodies, when compared to Denver's outside linebackers of recent history, that shine like the north star: Von Miller and Wesley Woodyard. A third player, Danny Trevathan, slid into Von Miller's Sam spot on nickel and dime packages and proved he could provide the type of coverage Denver was looking for. Between these three, the Broncos found their defensive magic formula. 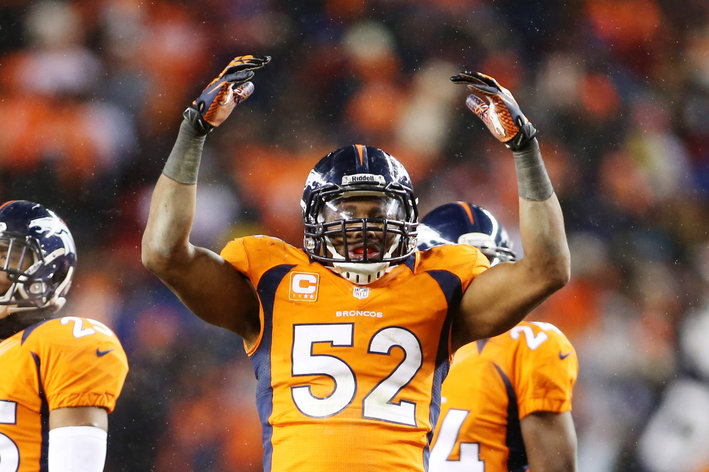 2012 was a revelation - Wesley Woodyard, former special teams captain, who had been with the Broncos since they signed him undrafted in 2008, was an every-down linebacker. And a playmaker at that. He was the only player in the NFL to record over 100 tackles, at least three interceptions, and at least five sacks - in fact, he was only the 12th player in NFL history to do so.

Camp outlook: Woodyard was Denver's "quarterback of the defense" last year, and we don't expect anything about that to change as the always-prepared Kentucky alum enters camp. Woodyard has spent five years preparing himself and earning this role with the Broncos. He's a remarkable example of how hard work overcomes draft-centric measurables in the NFL.

Von Miller was named the NFL's ninth best player by a group of his peers, but even that doesn't accurately tell his tale. Miller is so fast off the snap, if the Broncos wanted him to solely focus on rushing the passer, he'd break sack records.

But Miller is not just about the sacks. As he told MHR in June, he wants to be a complete linebacker.

Camp outlook: The only question for Miller as he enters camp is if he's ready to deal with the absence of Elvis Dumervil. It will be a test for the third-year player as teams put even more of their pass protection attention on Von.

Where Von Miller is trying to master all the nuances of playing the linebacker position, Shaun Phillips is likely better suited focused on one aspect: rushing the passer. It is no coincidence that the longtime San Diego Charger is here with the Broncos after the team lost Elvis Dumervil in free agency.

Camp outlook: Phillips will have the ability to mold his role based on his play in camp. With Miller and Woodyard both proving to be exceptional players that are hard to take off the field, Phillips may see more time at defensive end than linebacker. He could even start on the defensive line if he plays well enough. His will be a very fascinating watch at training camp.

Danny Trevathan ultimately locked down the role of nickel Sam backer for the Broncos last year after rotating with a number of players that included D.J. Williams. Trevathan finished with 33 tackles and a sack in 2012, but more importantly, he proved an effective linebacker in pass coverage for the Broncos, even if the stats don't reflect it. His second year in the league will be exciting to watch if he continues to improve.

Camp outlook: Trevathan has the inside edge on a significant backup role after his 2012 season, and we'd be surprised to see anyone take that away from him.

Damien Holmes' minicamp tryout went well enough to earn him an invitation to training camp. He's a bit heavy for outside linebacker, and his 4.98 40-time isn't the most impressive, but Denver saw him practice and decided to keep him around, and that's enough for me.

Camp outlook: Some undrafted player makes the Broncos roster every year, so Holmes has a chance to continue to impress Denver's scouts where his measurables might not: on the football field.

If you do like measurables, BYU's Uona Kaveinga has got them. His Pro Day numbers of a 4.65 40-time, 26 reps on the bench, and a 33.5-inch vertical all put him within the Top 5-7 at the linebacker position from 2013 combine numbers, had he been invited to the combine. Kaveinga was scouted as a natural leader as an inside linebacker for the Cougars, so he could compete at all three linebacker positions for the Broncos. The one measurable Kaveinga is lacking? Height.

Camp outlook: Kaveinga might be my favorite of the undrafted players to make the roster, and he'll most likely do that by making his name on the preseason on special teams. Light em up Terrell Davis style, kid.

The Broncos paid McCray the highest bonus among their undrafted players - $17,000 - to pry him away from other potential suitors after he fell out of the 2013 draft. The reason is likely his versatility: McCray can rush the passer, and McCray can cover the receiver. He can use his athleticism and versatility to mold a role for himself with the Broncos. If he can stay healthy - a problem through his college career.

Camp outlook: Like Holmes and Kaveinga, McCray will get his shot. Undrafted players always do in Denver. The question is whether he can use his skillset to make himself worth keeping on the roster. Otherwise he's a prime practice squad candidate.

Who are you most looking forward to watching at camp? One of the two studs, Woodyard or Miller? Are you interested to see Danny Trevathan progress in Year Two? Or how about Shaun Phillips molding his role as a OLB/DE pass rusher? Or maybe you want to scout one of the three young guys. Let us know in the comments!