When the Broncos are ready to close out tight games, they'll be counting on their bellcow running back to finish the job. The question is, who will it be?

The Denver Broncos are on the verge of one of the most prolific passing offenses in NFL history.

But that doesn't mean they can ignore one of the most important skill positions in all of football: running back.

"We’re working to stay balanced," offensive coordinator Adam Gase said in June. "Every game is different and I think if you get a lead, that’s when you become balanced because you’re going to start running the ball towards the end of the game."

With the Broncos expected to be favorites in a majority of their games this season, closing out games will be paramount. Protecting the ball, keeping defenses from stuffing the run, all while boasting the ability to break a play open for a big gain, will all be critical. 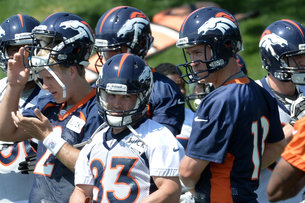 Want a prolific offense? The Broncos have one. We break it down:

And it all hinges on one of the most high-profile roster battle in all of Broncos training camp: starting running back.

Coming out of minicamp, the job appears to be Ronnie Hillman's to lose... but is it? While he doesn't have a grasp on the starting spot yet, couldn't the same be said for Montee Ball?

If Denver's 2013 second round draft pick exceeds in camp, he'll start over Hillman, pretty much no matter how the 2012 third round draft pick performs. Ball has the build and college experience as a team's primary running back; Hillman fits the mold of a change-of-pace RB. So shouldn't their roles be reversed as we head into camp?

"At the end of the day, running back is a unique position. It’s not always the biggest, strongest and fastest and that’s why you see guys late in the draft have great success," head coach John Fox said during minicamp in June. "It's about vision, quick feet, making people miss and it doesn’t really matter if you run a 4.3 40 or a 4.6 40, it’s just having that skill set."

That would appear to be an endorsement for Ball, whose vision and quick decision-making led him to record numbers in Wisconsin.

But until Montee Ball proves it in camp, it's Ronnie Hillman getting the first taste of the rock.

Ronnie Hillman is a highlight reel clip waiting to happen, but after an inconsistent rookie season, the Broncos are still waiting.

Hillman was Denver's change-of-pace back in 2012, backing up both Willis McGahee and Knowshon Moreno when they respectively filled the starting running back role. He finished the season with 330 yards on 89 carries (3.9 avg) and one touchdown, and saw his most work in Denver's first and final game of the postseason as Knowshon Moreno went down.

Camp Outlook: Hillman has reportedly put on weight and is the starter heading into training camp. He'll have fierce competition in rookie Montee Ball.

So you drafted a Badger? Montee Ball Edition 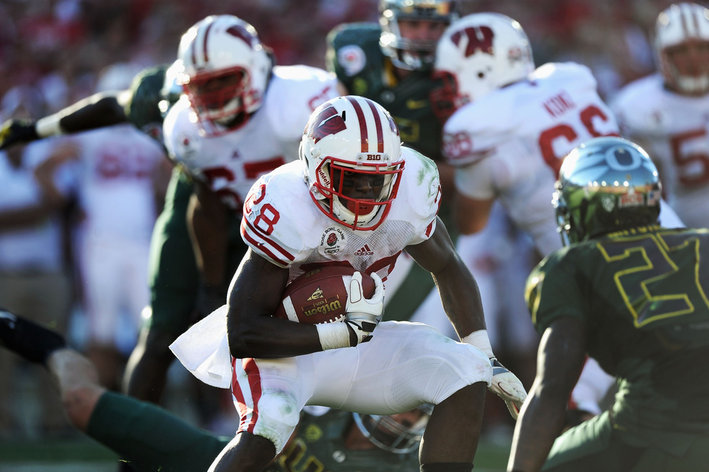 Montee Ball might see the most benefit from Denver's hiring of Alex Gibbs as offensive line consultant. A product of a zone blocking, one-cut system in Wisconsin, Ball holds NCAA and Big Ten records with 83 total touchdowns and 77 rushing touchdowns respectively. The kid knows how to make plays.

Camp outlook: I foresee Ball coming out as the starter once all is said and done in training camp and the preseason. He was just too productive as a bell-cow back in college to be kept waiting in the wings. With Peyton Manning's personal mentorship, he should be able to turn Denver's intent for him as a win-now pick into a reality.

Knowshon Moreno continued to be a productive back for the Broncos in 2012, showing flashes of more but still ultimately succumbing to the injury bug that has plagued him his entire career.

Camp outlook: This is the third straight year Knowshon Moreno has entered Broncos training camp where I've been able to say, "This is a make-or-break year for the 2009 first round draft pick." But this year it's especially true, and this year the battle is especially uphill. Moreno's contract expires after 2013, and there isn't a strong reason to believe the Broncos will extend him after he finishes the year. Not yet anyway. Moreno has this season to change that perception.

I know Lance Ball is not popular around these parts, but as a former Broncos blogger on another platform, I'm not sure why. He's a decent backup as far as backups go, and his ability to chip in in pass protection sets him apart in that realm. He's not spectacular, but do you usually expect your third-string running back to be?

Camp outlook: This will be Ball's toughest year yet to break onto the roster, and I don't see it happening, unless Moreno really chokes in camp, which is possible.

Half tailback, half fullback.

Just don't call him a failback.

"I thought he did a tremendous job," coach Fox said of Hester. "He’s smart, he knows protections, he’s got good hands, so he’s been a tremendous addition for us."

Camp outlook: Hester will fill the fullback role and is unchallenged in that position.

Jeremiah Johnson has been a training camp darling a couple of years now, but has failed to make an impact on gameday to this point. Johnson has spent parts of the last three seasons on different teams' practice squads (including the Broncos'), so is out of practice squad eligibility this season.

Camp outlook: Johnson has an uphill battle in what is truly his last chance to make it on an NFL roster.

C.J. Anderson is a big unknown. He only started two games in his college career, instead splitting reps with "co-starter" Iso Sofele, but he had great yards per carry (5.7) and some nice highlights in his career.

Camp outlook: There isn't anyone to challenge Anderson at the running back position for a practice squad spot, and another running back in practice is pretty common. Anderson appears bound for this unit in late August.

Who do you see coming out as Denver's #1 tailback after training camp, and who are you most looking forward to hearing about?