After six weeks - six long weeks - the Denver Broncos finally, finally got back to football Thursday, to the cheering throng of 3,007 Broncos fans, some of whom had been waiting in the parking lot since midnight.

"It feels good to get back to work," Peyton Manning said. "The fans are excited about the season. Certainly our players are as well."

The excitement for 2013 was a recurring theme as players and head coach John Fox met with the media following practice. "Our goals are set high, our owner on down," Fox said. "(Pat Bowlen) wants to win a championship. He wants to win them back to back. That's been done here in our organization, so that's not just talk. And that's everybody in this building's goal."

This year, this training camp, is clearly different. The expectations are higher. The sting of the playoff loss still lingers (Manning called it a "scar"), but the Broncos are trying to turn that burn into a collective goal. So the importance of this first practice can't be understated. A tone needs to be set from the start - a tone of hard work, perseverance, and team chemistry.

The only players missing were guard Chris Kuper and center J.D. Walton, who were both placed on the PUP list and won't make training camp, and defensive tackle Sylvester Williams, who hadn't signed his rookie contract (he signed an hour after practice). 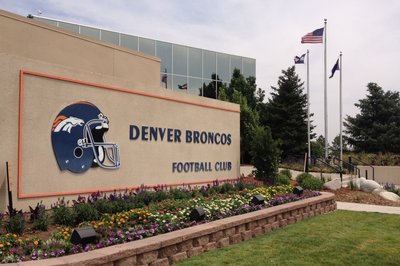 The first players on the field were kicker Matt Prater and fifth round draft pick WR Tavarres King, who came out of the locker room together. The crowd roared when Peyton Manning exited the locker room, while Duke Ihenacho did a good job getting the crowd fired up with some cheering. Von Miller was the last man on the field.

I noticed that both Knowshon Moreno and Chris Harris looked noticeably bigger than last year.

"I probably put on about five more pounds," Harris said. "I've kind of lost that body fat and put on a lot more muscle."

The Broncos frown upon us posting a depth chart in its entirety, but I will make note of a few interesting lineups and how the position battles shook out today.

The safety position saw the most first-team rotation, with Rahim Moore and Mike Adams starting the most snaps, but David Bruton seeing a significant amount of work as well. Even Quentin Jammer got in the mix with the one's, making it the most interesting and fluid position on Day One.

"We have some new guys in the secondary," coach Fox said. "You want to create competition, the more competition you have means you have a better roster so, these guys are one day into it."

Among the safeties, Rahim Moore stood out, having a solid day and breaking up a few passes from Peyton Manning. He also boasted perfect coverage against Jacob Tamme with Brock Osweiler under center, jumping the route to intercept Brock for what could have been a return for a touchdown.

What was not in flux was the running back position, though many expected it might be. Ronnie Hillman appears to have a stranglehold on the starting job for the time being as Montee Ball only saw time with the two's.

Montee Ball was asked what has been the hardest part of picking up Peyton's offense so far. "Really just Peyton's audibles," Montee Ball said. "There are about four sheets of everything that he can audible from.... Sometimes he'll tell you where to go, but most of the time, he'll test you. Because he wants you to see if you know your stuff, which is what he should do."

Among tight ends, Julius Thomas made the biggest splash, starting ahead of and earning more reps than others on the roster.

Other interesting depth chart notes involved the two starting lines, offensive and defensive. Ryan Clady, still recovering from his shoulder surgery, was limited in practice and didn't participate in contact drills, so Chris Clark filled in at left tackle. Zane Beadles saw time at left guard while Manny Ramirez - not Dan Koppen - started at center. The right side filled out as expected with Louis Vasquez and Orlando Franklin at guard and tackle respectively.

On the defensive line, starters from right to left were Robert Ayers, Terrance Knighton (who is huge), Kevin Vickerson, and Derek Wolfe.

As has often been the case in my coverage of training camps at Dove Valley, the first practice saw the offense struggle. It's natural for there to be a learning curve for the offense after a long break from football, as players work on their timing and chemistry, while the defense is able to excel to a degree because, more or less, each player only has to worry about the man in front of him.

Indeed, the defense had their way a number of times. Running backs Ronnie Hillman and Montee Ball were rarely - if ever - able to break into open space, and the passing game was an inefficient shadow of itself through most team drills. Manning and his targets were slightly out of sync, and while it's hard to gauge without the full pads on (and with no contacting the QBs allowed) the defensive line was able to penetrate to the point where I believed a sack was eminent a number of times.

Among the offensive players you expect to stand out, Eric Decker had the best day, with Montee Ball also making a strong showing in the passing game (both in blocking and catching). But for each impressive play the offense made, the defense seemed to make two. Chris Harris was covering receivers like wallpaper, the safeties were elevating to each other's levels, and linebackers Wesley Woodyard, Nate Irving, and Steven Johnson were continually in position to make great plays.

"It's just good to come out here and compete," said cornerback Chris Harris. "It's Day One - glad we got Day One over with, and looking forward to improving." 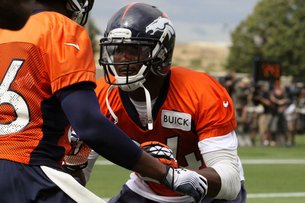 Rookie wide receiver Tavarres King had a good day that was made even better when he hauled in the Play of the Day - a 50+ yard touchdown reception from Brock Osweiler. The way King sped through Denver's secondary was what made the play all the more exhilarating. King flew in between Duke Ihenacho and another Broncos defensive back like an X-Wing assaulting the Death Star.

Tony Carter was a practice star in training camp last year too, so I came into this camp wanting to see even more, and he delivered. Carter was step-for-step with the likes of Demaryius Thomas in one-on-one drills, then hauled in an impressive interception against Brock Osweiler later in 7-on-7's. He was the most consistent defensive back of the group. Runner Up: Rahim Moore was just a step behind.

It's true that Brock Osweiler had the highlight throw of camp today, and he also has a hell of an arm. I just was very unimpressed with his session as a whole, especially after all of the buzz surrounding him coming out of OTAs and minicamp. The Play of the Day wasn't enough to offset his placement in this slot. Osweiler was generally off - it looks to me like he was trying too hard to go too fast. He threw a couple of interceptions that were just simply bad decisions, and he had a few other near-interceptions as well. Runner Up: QB Zac Dysert, who probably had a worse practice, but expectations were lower. It was his first-ever NFL practice, after all.

Thursday night at 6:00 p.m. the Broncos will have a walkthrough practice that is only open to the media. Next public practice is Friday at 10:25 a.m. Full schedule.