Broncos close out first day of training camp with walkthrough

Day One p.m. report: The Denver Broncos finished Thursday's first day of training camp with a light walkthrough that was closed to the public and featured Sylvester Williams' training camp debut.

Share All sharing options for: Broncos close out first day of training camp with walkthrough

The Denver Broncos finished their first day of training camp Thursday evening with a light 80-minute walkthrough that was closed to the public. In it, the media was exposed for the first time at camp to first round draft pick Sylvester Williams, who signed his rookie contract shortly after this morning's practice.

"I'm just going to be aggressive and play hard every play," said Williams. He didn't get the chance to do that today, as the Broncos were in shorts and t-shirts, but he also said he's excited to get to work tomorrow. 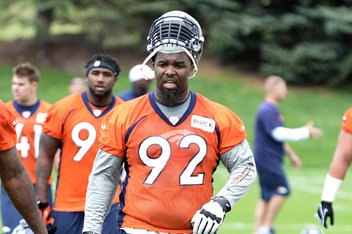 "I hope that I just impress my teammates and my coaches. Honestly, that's what I look forward to doing every day," Williams said. "In the weight room and on the field, I just want to impress the people who brought me here. The people who believed in me enough to draft me in the first round."

The walkthrough saw Broncos players participate in drills and go over the plays they practiced earlier in the day. The light workout also saw players rotate in and out a bit more than we saw in the morning session. For instance, there was a healthier rotation of running backs as Montee Ball and Knowshon Moreno each took more half-speed snaps from Peyton Manning as players executed their mental workout.

Since it was a no-contact practice, Ryan Clady resumed his work at starting left tackle, while starting defensive ends Robert Ayers and Derek Wolfe rotated around left and right sides throughout the session. Sylvester Williams took several snaps alongside Terrance Knighton at starting DT, while Kevin Vickerson still took many as well. It's clear that the Broncos have a lot of options across the defensive line, with a lot of players able to move from defensive end to tackle and from end to outside linebacker in a hitch.

Manning was clearly in command of the practice. Aside from conversations here and there with offensive coordinator Adam Gase, Denver's quarterback had no problem operating the offense, running the plays, and correcting players as he audibled and called huddles. John Fox was able to sit aside and watch his well-oiled machine work with little direct interaction.