The Denver Broncos picked up the pace on Day Two of their 2013 training camp, as the offense got more in sync and both sides prepared to get into full pads starting Saturday.

Denver Broncos players Thursday said it may take a little time for the offense to shake off the rust and get back in sync after six weeks away from the practice field.

Apparently that amount of time was very little: one practice. In the second day of Broncos training camp, Peyton Manning and Brock Osweiler each led offensive units that ramped up significantly, in both production and speed.

"As a coach, you kind of know what you're going to get with five weeks off," head coach John Fox said. "It wasn't a lack of effort. They came in in great shape. As I said yesterday, effort was there. But this is the ultimate in team games, and it takes a minute to get that chemistry."

That chemistry was apparent among backups and starters alike, and Peyton Manning executed great connections with Eric Decker and Demaryius Thomas, while Brock Osweiler was completely in sync with wide receiver Greg Orton, who stole the show today. The offense was brisk as Manning unleashed the no-huddle for the first time at training camp.

"We want to start fast," Decker said. "I think last year, we struggled a little bit in the first half as far as putting points up. So (we're) getting into a rhythm early. Second half was kind of our strength. "

Ryan Clady was limited with his shoulder, while tight end Lucas Reed missed practice with a hamstring. Chris Kuper and J.D. Walton remain on the PUP, so until that changes we likely won't make note of them here moving forward.

Champ Bailey sat out some of the later reps of practice during team drills.

Offense lights it up

Peyton Manning was magnicifent in Day Two, completing around 80% of his passes in team work, and he spread the ball around. Demaryius Thomas, Eric Decker, Wes Welker, Julius Thomas, Jacob Tamme, Ronnie Hillman, and Montee Ball all were recipients of Manning passes Friday.

In 7-on-7's, Manning connected with Julius Thomas, who made a tough grab with David Bruton in coverage. Next he targeted Demaryius Thomas twice; the first was on a deep post, and Thomas beat Dominique Rodgers-Cromartie but dropped the 30-yard pass. The second was a short crossing route that netted the Broncos about seven yards.

In the final 11-on-11 session, Manning connected with Thomas, Decker and Welker on four straight passes. Any rust from yesterday was definitely shaken off for today's practice.

The offense may have been lighting it up, but the defense still managed to make a handful of plays, including interceptions by Wesley Woodyard, Mike Adams, and Duke Ihenacho. Jeremy Beal had a good "tackle" on Knowshon Moreno after beating a "block" by Dominique Rodgers-Cromartie, but it's hard for defenders to make those types of plays until the pads come on.

Oh by the way, the pads come on tomorrow.

"That's when there's no hiding and there's no running (away)," Woodyard said, smiling.

The competition at middle linebacker is beginning to look like a two-horse race, as Nate Irving and Stewart Bradley get most of the snaps while Steven Johnson fills in at #3 and also sees time at strongside linebacker. Irving is getting all the starter snaps, and he's making good use of those, including causing a Peyton Manning interception off the deflection he caused by hitting Wes Welker just as the ball hit Wes arms.

Ronnie Hillman continued to get the majority of the first team carries, but Montee Ball saw more snaps with the starters today than he did yesterday, and he had a couple of impressive catches again as well, including a leaping grab over a defensive back and a bobbling fingertip grab he managed to haul in.

"Obviously we felt very strong about Montee's ability," coach Fox said, "and we like everything we've seen up until now." 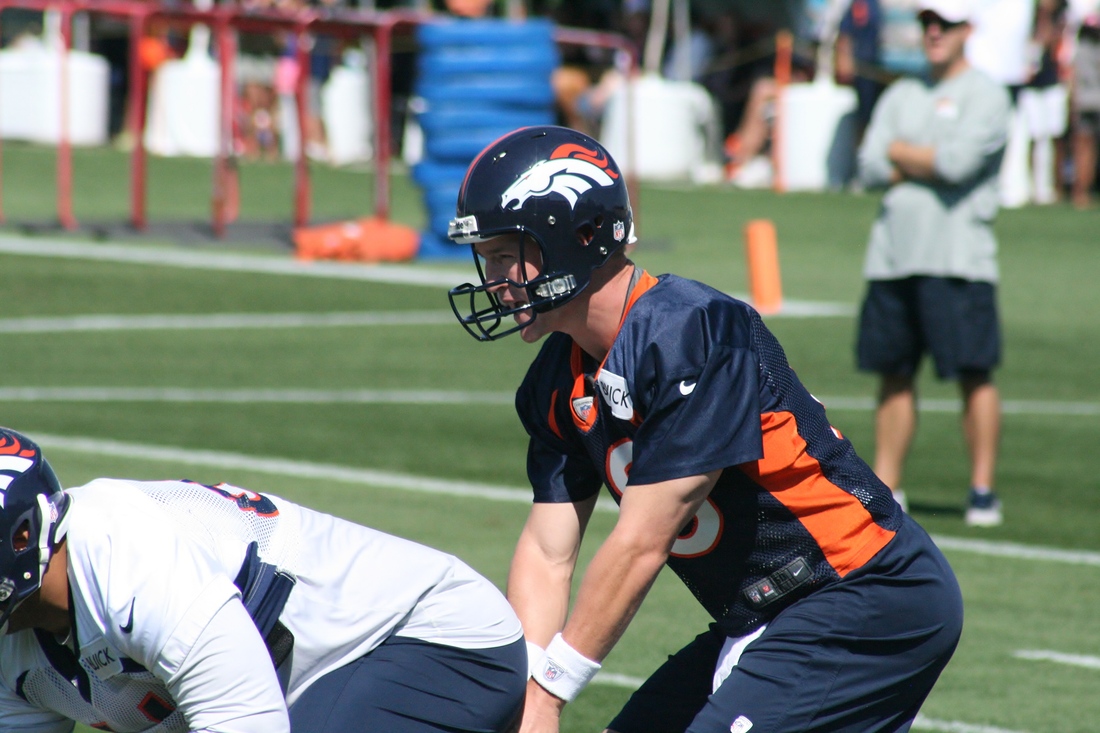 Manny Ramirez is still manning the snaps to Manning, while Koppen continues to work with the two's and Brock Osweiler.

The pads come on Saturday, so we'll have a much better idea of all of these positions after tomorrow's practice.

After Trindon Holliday, who will definitely make the team, it's interesting to think who the Broncos will keep at wide receiver. Theoretically it's a two-horse race between Greg Orton and Bubba Caldwell, and as you might have heard, Greg Orton had a terrific practice. But Caldwell didn't take that completely sitting down, hauling in one of the best grabs of the day near the end of practice - a deep, perfectly thrown ball from Brock Osweiler over Omar Bolden near the far end zone.

Peyton Manning pulled a young fan out of the stands and invited the kid (roughly nine years old) to run routes in the middle of practice. The young boy obeyed Manning's instructions and ran a few routes about 15 yards downfield. The first one flew just beyond his reach as he made a cut, but the second was a perfect connection. Someone in the media asked me how jealous I was of that kid at that moment, and I said everyone is. What a treat for him to catch a pass from Peyton Manning in Broncos camp.

In case you missed the memo this morning (I did), today is Greg Orton Day. Kid is catching EVERYTHING. #BroncosCamp

A battle for a jump ball between Greg Orton and (I believe) David Bruton went on for what felt like a minute. The two players, each arm-locked with the football and nearly leg-locked with each other, twisted and turned near the far end zone as, ultimately, Greg Orton came away with the pigskin.

It was probably his 15th catch of the day.

Orton was everywhere Friday. At one point he hauled in three straight passes from QB Zac Dysert.

Runner Up: Julius Thomas. Thomas had some very impressive catches today, including a nice jump ball over Champ Bailey. It's clear why he's getting starting reps: he's impossible to ignore.

Green had a rough day with the drops, and I didn't see him do particularly well or get many targets in team drills. Catching passes isn't his specialty though - blocking is, so I expect to see better from him when the pads come on tomorrow.

Runner Up: Kayvon Webster. A few people requested in the comments and on Twitter that I scout this guy, so I did. I focused solely on Webster's form and ability to keep up with his defender on at least five different plays or drills. I was never left overly impressed, and he let his man behind him a few times.

Denver's next practice is Saturday morning at 8:50 a.m.