The pads came on, and so did the pain. Our report from Day Three of 2013 Denver Broncos training camp.

You hear a loud "whack", an exclamation of voices, followed by hundreds of smacks.

The first sound is linebacker Steven Johnson laying the wood on Lance Ball. The second and third sounds are the "Ooohs," then applause, from the audience.

In the third day of Denver Broncos training camp, the clouds parted, and head coach John Fox proclaimed, "Let there be pads." And Mile High Report saw that it was good.

"I was going to put them on myself today," defensive coordinator Jack Del Rio joked after practice. "It's always great to get into the padded portion of camp. You go through the offseason - spring practices, OTAs and all that - in shorts. It’s good to find out what you’re going to do in pads because that is what really counts."

“I think our guys enjoyed it today," offensive coordinator Adam Gase said. "We had some big runs, which is a different feel for us because it seems like without pads the holes close up a lot quicker. It seemed like those holes were a little bigger today. You saw some explosive plays and that is what we are looking for."

The explosive plays were led by the likes of Ronnie Hillman and Jeremiah Johnson, while the passing offense looked out of sync again. But that was okay; today's focus was definitely on the running game, since it was a portion of the playbook the players haven't been able to effectively practice in nearly seven months. Offensive linemen were eager to hit and defenders were eager to tackle.

"Our guys are getting aggressive because it has been so long since they have had their pads on, since January, and they have been waiting for this," said Gase.

All were present Saturday, though Lucas Reed was dressed but did not participate. He was waived hours later. His replacement, newly signed tight end Jake O'Connell, was at practice. Ryan Clady was limited. 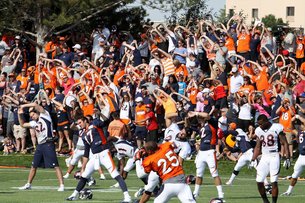 Center/guard C.J. Davis was carted off the field late in practice and did not return. Coach Fox said he "tweaked" his ankle.

Linemen One-on-Ones and The Pit

My favorite drill of training camp. Give me defensive lineman versus offensive lineman, one-on-one, every day of the week. Fighting for leverage. Desperate to keep your own balance. Overpowering your opponent.

The offensive line got the better of the defense in this drill today, but defenders got a few wins as well. Robert Ayers tossed Chris Clark around like a rag doll in run blocking, while Quanterus Smith was able to just get by fellow rookie Paul Cornick. Sylvester Williams was pushed around by Quentin Saulsberry and exclaimed something to his coaches afterwards in frustration; they gave him another stab at it, and this time Williams got revenge.

In The Pit (pass rushing one-on-one's). Orlando Franklin was able to keep Von Miller blocked away from his target, while Justin Boren handled Mitch Unrein.

Miller would get revenge on Franklin during team drills a couple of times. He was electric today.

It was a rough outing for the passing offense as a whole. Peyton Manning threw six straight incompletions at one point, while Brock Osweiler slid back to his poor decision-making level of Day One. Several balls were just slightly out of place from both QBs, and wide receivers weren't as open and weren't coming down with the tough catches.

The one big play for the unit was Peyton Manning's pass to Demaryius Thomas. Thomas had gotten behind the coverage and was able to outrun David Bruton for a long touchdown. 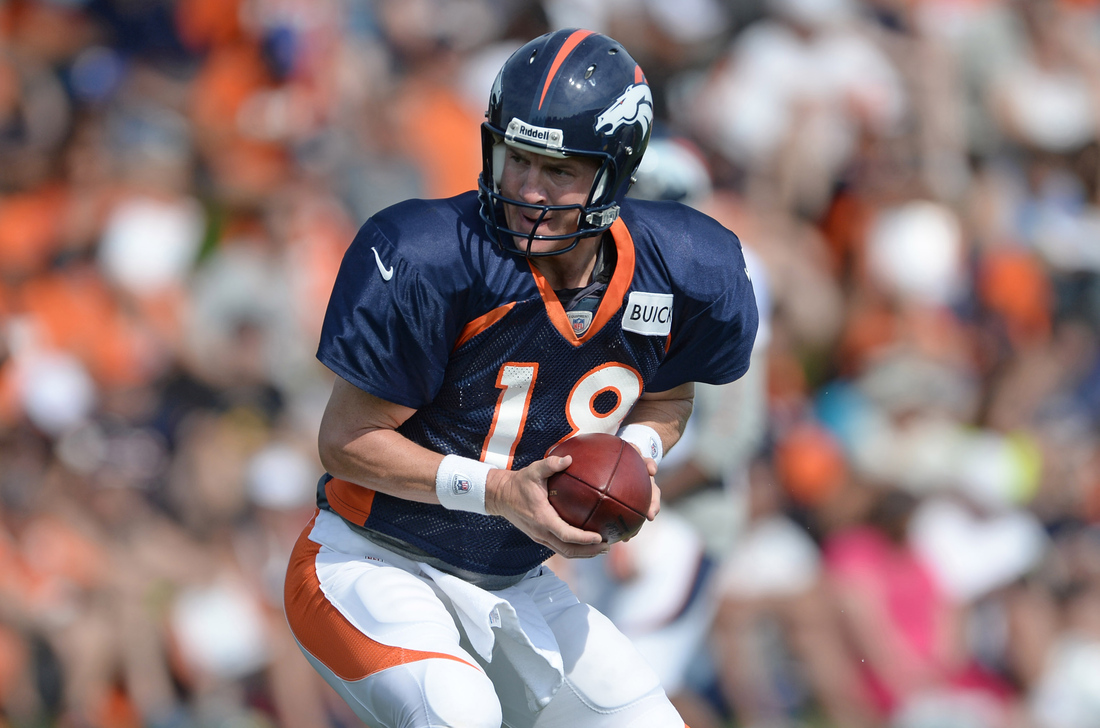 This is the most interesting position battle at training camp this year, and the competition appears to be wide open. Three guys are getting the majority of the reps - Rahim Moore, Mike Adams, and David Bruton, with Bruton filling in for each player at free and strong safety respectively - while Quentin Jammer and Duke Ihenacho have also gotten in the first-team mix.

"We’re learning right now," Jack Del Rio said of the safety competition. "We're looking at a little bit of everybody, getting them in different spots. We’re evaluating. We’re exposing them to a lot. I like to use a lot of different combinations with our back end. We want to build that flexibility now, teach them different roles and let them compete. We’ll sort through that and determine which guys go first, and which guys come in in certain groups as we get going."

Del Rio said he does this to build a scheme that limits Denver's exposing their weaknesses, and that players will earn playing time based on the tasks they succeed at. The Broncos will see different combinations of players on the field. "I talked about it last year and then I backed it up and we did it," Del Rio said.

I am hearing through the grape vine that the Broncos are making a deliberate effort to get their younger and less experienced players more practice with the starters, and that's very apparent along the offensive line. Manny Ramirez lost his starting center job to Dan Koppen today, but instead saw a number of snaps at starting right guard in lieu of Louis Vasquez.

Julius Thomas was lined up with the two's more than he had been in previous practices. He still saw the field with the one's at times, but the drop in his rep count was noticeable.

Strong safety Duke Ihenacho intercepted a Brock Osweiler throw in 9-on-7's that he returned for a touchdown. Most impressive? It looked to me like he did it lined up as nickel linebacker.

Denver's starting running back lived up to his job title today, showing a little bit of everything you hope to see in your starter. His first cut is extremely fast - over my shoulder, Tom Nalen exhaled loudly and proclaimed, "That was a perfect cut!" after Hillman burst free for a big gain on the first run of team drills. He was also solid in pass protection, and it's clear he has been soaking up the playbook.

“He has done a good job," offensive coordinator Adam Gase said of Hillman. "It is a different deal from the position he was in last year because we were very selective in what we did with him. Now, the whole book is open. The adjustments you have to make at the line of scrimmage are not easy and he is working hard trying to make sure that he is accountable to his teammates and he has done a good job in these first few days of practice.”

Runner Up: T Chris Clark. Clark has been impressive filling in for Ryan Clady, but the first day with the pads on saw him really shine. Clark swallowed Robert Ayers in one-on-one pass rush, shortly after dominating Derek Wolfe in the unit's run blocking exercise. He was also responsible for launching one of Hillman's bigger runs in team play.

Second Runner Up: RB Jeremiah Johnson. Johnson had nearly as many big runs as Hillman did Saturday,

We're not selling the farm on Montee Ball after one practice - not by a long shot - but the rookie looked a lot like, well, a rookie Tuesday. He seemed indecisive in his cuts and hesitant to hit the hole. At one point, near the end of practice, another member of the media asked me if he had gained positive yardage at all in team drills. He had, but just barely, on one run. Other than that he was consistently stuffed, and his pass protection was a little suspect as well.

"I think he missed a couple [blocks] today," said Gase. "It is a process, it’s not going to be an easy thing where he is going to be able to step in there and dominate linebackers as a rookie. It is going to take some time and he is going to have to work on it. We have a lot of training camp practices left."

Runner Up: Robert Ayers. Ayers looked great in the run-blocking one-on-one's, but outside of that he struggled today. He was dominated in The Pit and had a couple of big runs go his direction in 11-on-11. He did have some success in pass rush in team drills, though.

I didn't think Phillips had a particularly bad practice, but apparently he did.

On that note I'm sorry broncos fans I let you down today. I didn't have my best practice today. But I will make it up to you.

The Broncos have a media-only walkthrough tonight at 6:00 p.m., though I'll probably go attend a Rockies game instead of covering that (it's their last night in town while I am here). The next full practice is Sunday at 10:25 a.m.