Season-ending injuries put a tone of gloom over a practice, but the Broncos proceeded with work nonetheless. There were a number of highlights from both the offense and defense Sunday.

Literally, the skies were overcast, with hours of rain giving the Broncos a wet field on which to practice. That storm would pass before practice; figuratively, the storm was just beginning.

Center Dan Koppen suffered a torn ACL and is finished for the season.

But outside of that gloomy forecast, the Broncos went to work. The rain subsided for the fans and players to enjoy some precipitation-free football. And as players donned pads for the second day, the intensity of the workout seemed to increase.

"That's the catch-22 any coach goes through any time of year," head coach John Fox said. "You're getting ready for the season and you need to get into pads because you've got to get in shape, and yet you're still trying to make sure you've got enough guys to battle with."

For now the Broncos will do battle with Manny Ramirez at center, along with newly-signed veteran Steve Vallos, while they continue to shuffle other positions to find combinations of players that work, especially on defense.

Tackle Ryan Clady was limited (shoulder). Center/guard C.J. Davis (ankle) and wide receiver Andre Caldwell (hamstring) dressed but did not participate. Hamstrings are tricky, but Bubba needs to hope that recovers soon; he is far from guaranteed at making this roster.

There was one other injury of note besides Dan Koppen's likely-season-ender: defensive lineman Derek Wolfe hurt his leg during practice and had to come off the field. Malik Jackson filled in for Wolfe as he walked along the sidelines. The injury didn't look bad - Wolfe remained on the field, there was no noticeable limping or pain - but it's something to keep an eye on.

It was a harder-hitting practice today, and it was overall a joy to watch. Peyton Manning was efficient, the defense was stiff, and I'd be hard-pressed to say either unit "won" the practice either way. 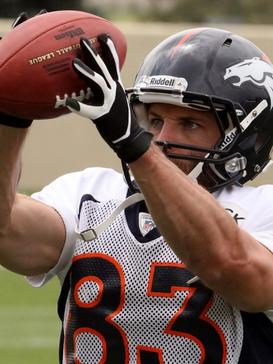 In 7-on-7 red zone work, Wes Welker was able to sneak between David Bruton and another defender for a touchdown on consecutive plays, just after Eric Decker went high on a slant to beat Dominique Rodgers-Cromertie for six.

With Brock Osweiler under center, Mike Adams missed an easy tackle on Virgil Green (Green had slipped in the wet grass and got up more quickly than expected); Green took it to the end zone. A few plays later, Omar Bolden successfully defended the pass intended for Gerrell Robinson - a play that featured a former Sun Devil throwing to another Sun Devil guarded by a fellow Sun Devil.

It was a hard day for me to pick my "Who Won Today", which is always a good thing, so let me highlight a handful of guys that impressed me. These are guys that aren't necessarily starters, but up-and-comers: my favorite stories to tell in training camp.

Ihenacho has been on my radar for a couple of practices now, and for all the right reasons. Today he dove for a Brock Osweiler throw in the end zone, grabbing it for an interception. Earlier he was able to snatch the football out of Knowshon Moreno's bobbling hands for an INT.

Ihenacho is seeing more snaps in general, including in nickel formations, and justifying those snaps with big plays consistently. He's my favorite up-and-comer from camp so far.

Trevathan came strongly on the scene at the end of last year, but his play continues to improve. Today he jumped high to intercept a Brock Osweiler pass intended for Montee Ball in the corner of the end zone, to the loudest cheers of the day.

@Grindin_59 I see you boi! Can't wait to see take be league by storm! Can I get a RT and follow back from a huge fan pic.twitter.com/WTfeCjXvWW

Later he had a "sack" on Osweiler in 11-on-11's and a handful of tackles in running back nine-on-seven work.

Could it be that Johnson is all-too-aware of this and has elevated his game to an even higher level? It would seem so. He broke two more long runs today in nine-on-seven work, a day after he made a handful of plays in the first padded practice of 2013 camp. Johnson is trying to make himself uncuttable.

The best play of the day was the last one featuring the starting offense, and Peyton Manning's last throw of practice. Demaryius Thomas was leapt to beat Tony Carter for a sideline grab then broke free, sprinting down the sideline. Rahim Moore was in position to lay Thomas out - he may have chosen not to, deliberately, but Thomas zoomed toward the end zone. David Bruton pursued but failed to catch up as Thomas launched himself into the end zone, right near the media where I was standing.

#DenverBroncos #DemaryiusThomas had reason to smile after hauling in a deep pass for a TD during today's practice http://t.co/05YQiDMo3t

One media member joked at him, "Hey didn't you hear the whistle blow?" (It had.) Thomas quipped back, in a rare moment of in-practice interaction, "Man there's no way he (Carter) makes that tackle." Six points for Denver.

For the most part, Wes Welker had been getting the better of cornerback Chris Harris in the early practices of this 2013 training camp. The battle at slot promised to be an epic one this camp, with two of the best in the NFL going at it. It has not disappointed, and today Harris got the edge. He broke up at least two Welker passes today, and #83 only seemed to find success when he was going against the safeties in red zone work.

"Wes is going to compete and I am going to compete every day. It was just my day today," said Harris. "That is just how it goes when it’s two great players going against each other. He has his days and I have my days."

Harris's impressive day even transcended his coverage of Welker, breaking up a pass intended for Demaryius Thomas with a textbook tackle as the ball hit Thomas's hands. Harris looks to benefit greatly from the array of talent the Broncos have amassed at wide receiver.

"We are going to be well prepared once the season comes," Harris said.

I mentioned in my first practice report that the third string quarterback actually had a worse day than Brock Osweiler, who took home "Who Lost Today" honors that day. I justified that by saying expectations weren't high for Dysert, and so you can excuse his misfires during his first-ever practice.

But after four days, you'd expect a little improvement, and today was really bad. It's about time I discussed it a little bit.

Dysert is indecisive, and when he does throw he is off-target. He holds onto the ball far too long, and his only completions tend to be checkdowns to a tight end. At one point during red zone work,

Undrafted rookie fourth-string QB Ryan Katz has not seen a single team snap yet, but I'd like to see what he can do over the seventh-rounder at this point.

The Broncos' next practice is Monday at 8:50 a.m. They have Tuesday off.