Day Six of training camp saw Broncos veterans and rookies return from a day off, and plays were made all over the sunny field in front of record attendance, led by the one and only Peyton Manning.

The Denver Broncos returned to the practice field Wednesday to the largest training camp crowd at Dove Valley this year. 4,233 fans took in the sights of Peyton Manning and company a day after rookies and veterans enjoyed a day off.

And what a sight it was. Manning was terrific on Day Six of Denver's 2013 training camp, particularly when running the no huddle in team drills and the two-minute drill.

"They are tough," cornerback Champ Bailey said of the Broncos offense. "They are tough without Peyton, so you add him to the mix and it creates a dangerous offense. They give us a lot of work, we have our hands full. But, we like that challenge because we are not going to see this kind of package come at us any Sunday."

"I think we can be fast," wide receiver Demaryius Thomas said. "I think it’s a big advantage—being in shape, being able to go fast and keep going, know what you’ve got to do at all times—that can wear a defense out. I think that can be a big advantage if we can get it going well and stick to it."

That big advantage saw the Broncos offense abuse the defense in four plays Wednesday in less than a minute. Manning went 3 for 4, with the one incompletion being called pass interference by the refs in attendance.

Manning's #Broncos went 55 yards in 4 plays in hurry up offense for a TD to Demaryius Thomas. #beautiful #BroncosCamp

To put it simply - outside of one tipped interception from Dominique Rodgers-Cromartie to Rahim Moore early in practice, Peyton Manning and the offense had the defense's number all day.

Sylvester Williams (left knee) and Jacob Tamme (right quad) did not participate. Ryan Clady (shoulder) was limited in practice as well. Chris Kuper, who is on the PUP list, was seen running after practice. He's limping less than he was even a few practices ago.

Dominique Rodgers-Cromartie injured his left ankle and is expected to miss two to three weeks. "He's done it before, so I'm not overly (concerned)," coach Fox said. "It's part of the game. We're going to have even more injuries as we go through." Justin Boren was also carted off with a right big toe injury.

The situation on the Dove Valley was dire: Manning had two minutes to go about 55 yards, down six points. The Broncos defense had an interesting look. Down DRC and Bailey, they featured Malik Jackson as the only down linemen, with a plethora of linebackers, safeties and cornerbacks spread around to provide pass rush and coverage.

His first pass was to Eric Decker, who burned Mike Adams for a big gain before running out of bounds. Next he targeted Decker again, this time being covered by Tony Carter; the pass got the Broncos into the red zone. His next pass was the Decker in the end zone, again covered by Carter, but fell incomplete (a sketchy flag was thrown for pass interference - I think Carter was fine on the play).

Then came the dagger. Manning floated a pass to the corner of the far end zone, toward Demaryius Thomas, who was being closely covered by Omar Bolden. The throw could not have been more perfect, and Thomas came down with the drill-ending touchdown.

"Plenty of time for Joe Flacco to go to work," Tom Nalen jabbed over my ear.

The Pit is one of my favorites when it's OL vs. DL - but it's just as juicy when it's RBs and TEs going against LBs and DBs. RB Jeremiah Johnson looked mighty impressive in this drill, eating Ross Rasnar and Uona Kaveinga alive respectively. I would have liked to seem him go against some tougher competition.

Von Miller was Von Miller in this drill; he made Virgil Green look pretty bad. It was a tough drill for Green; undrafted rookie linebacker Damien Holmes also got the better of the veteran tight end in one-on-one work. Ronnie Hillman did a very nice job against Mike Adams, while Montee Ball whiffed Rahim Moore before improving a little against David Bruton.

"Today I think I missed one, but I’m trying to get perfect on that," said Ball. "I think I had a pretty good day today and I’m still working on that."

Peyton Manning's most impressive throw today was only possible after a culmination of impressive blocking and route running. With Julius Thomas, Joel Dreessen, and Ronnie Hillman lined up in a three-back set, Thomas broke free on a deep post down the middle of the field. Hillman had one of his customary clutch blocks that gave Peyton the time to find Thomas, who was somehow already 20 yards downfield and breaking wide open. Manning threw it to Thomas in stride, who hauled it in for a big touchdown.

It's hard to put into words how much better Montee Ball looked today. It wasn't only his best practice so far - even a moderate practice would have qualified as such. It was a strong, impressive practice from start to finish. 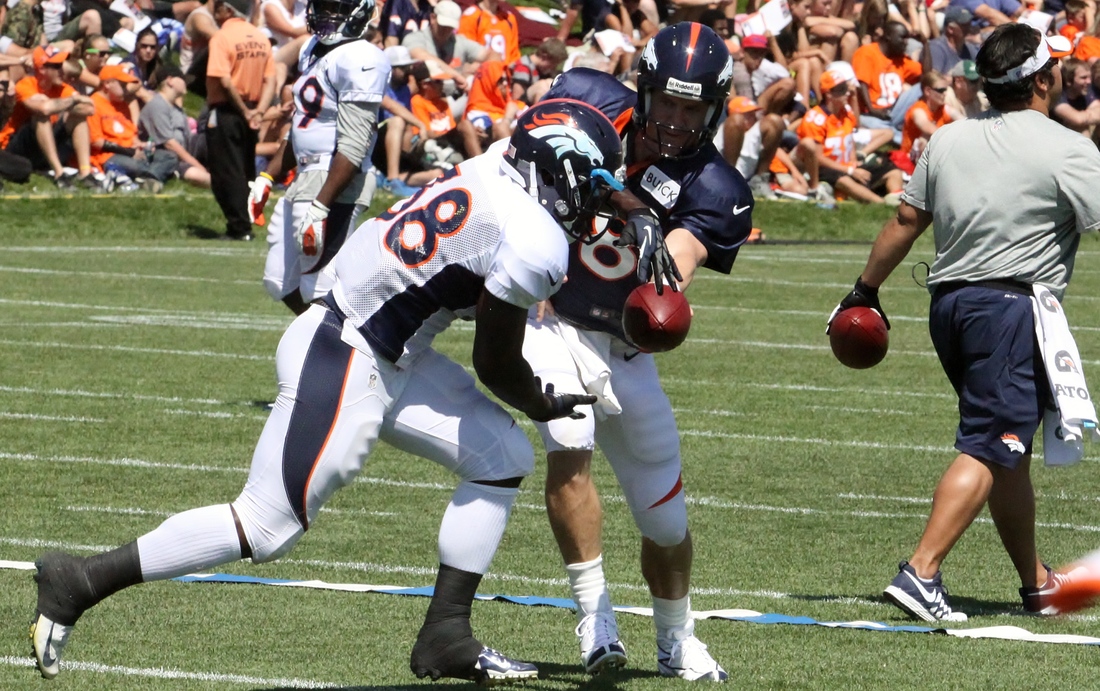 Ball had a nice deep sideline grab, over his shoulder early in practice, and right from there I felt like he was hitting a groove. In 9-on-7's he broke a long run down the left sideline; later in 11-on-11 Montee showed exactly what I wanted to see: decisiveness. He cut once, ran downhill, then made another cut in the second level to break free for a big 10-plus-yard run.

"For sure," Ball said when I asked him if this was his best practice. "Today I finally made some plays and did some good things with my feet."

"One thing I was talking to the other running backs about is now it kind of seems like I’m not thinking as much coming out of the backfield," said Ball. "I’m kind of just reacting now, which is good and comes with film and experience."

Runner Up: Ronnie Hillman Hillman had a great practice too, if just a shade less impressive than Ball's. He continues to be rock-solid in pass protection and the spin move he unleashed today also raised eyebrows. "I stalled them out. I didn’t want to make them look too bad so I just ran off to the side," said Hillman with a laugh. "I could have had the touchdown."

Runner Up #2: Trindon Holliday. Holliday had a great day in receiver work. He seemed to catch everything thrown his way, which was a significant number of passes. Once the ball was in his hands you could see him go into "elite returner" mode, trying to make guys miss and succeeding at one point to sneak into the end zone despite a crowd of Broncos defenders around him.

With Dominique Rodgers-Cromartie down, and Champ Bailey sitting out the last few team drills (his reps are being limited this year, presumably because he's, well, old), it was Tony Carter squaring off against Demaryius Thomas for several of the plays during hurry-up and two-minute work.

It wasn't pretty. Manning went after DT and Carter again and again, with success each time.

Runner Up: Virgil Green. Green had a tough day of drops and at least one missed assignment that I saw, as well as the rough go in one-on-one pass pro I mentioned earlier

Runner Up #2: David Bruton It was a bad practice for a lot of Denver's secondary - as would be expected when Manning looks that good - but I saw Bruton get beaten on a couple of plays in isolation that merited him being mentioned here. Hopefully his next practice is better, because this training camp is his big opportunity.