That Buffalo Wild Wings sprinkler was at it again.

It was a day of firsts at training camp Thursday as the Broncos kicked off their second week of practices. It was the first big fight among Broncos players in 2013, and it was the first time Peyton Manning fell to the ground in his practice career as a Bronco.

Manning wasn't touched; he just slipped and fell to the ground awkwardly as he threw. Action around the line of scrimmage halted immediately - you don't mess around with Peyton Manning on the ground. Manning got right up and was fine, but I'm sure the 3,000 fans in attendance gasped and held their breath for a moment at the same times I was doing so.

Another breath-stopper was the fight that broke out early in practice. IT was ferocious. Danny Trevathan lost a helmet, while Chris Clark and Julius Thomas were each fuirously throwing haymakers at men wearing opposite-colored Broncos jerseys. At least 10 Broncos players were involved.

"Like everybody says, it's camp. You have scrambles, frustration because you want to make a play so badly," said Trevathan. "It's like brothers, brotherly love. You fight with your brother, but the next day you forget all about it." 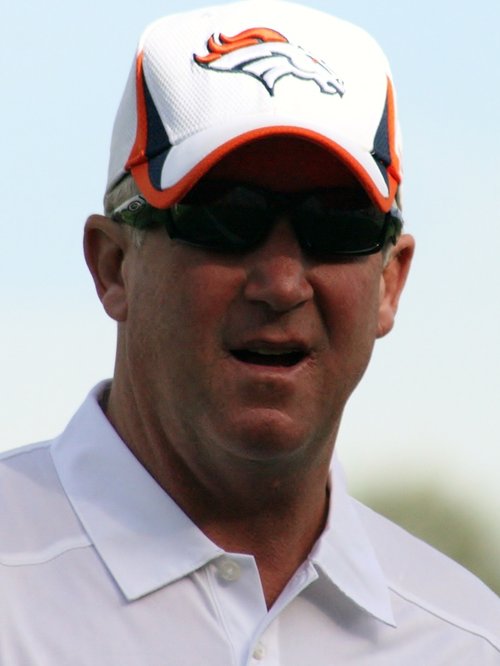 "It's definitely forgotten," Julius Thomas said. "We shake hands about it; we'll probably laugh about it later. It's just that guys are trying to show their teammates, 'I'll be there for you in the thick of things.'

"We're competing against each other. Sometimes we have to go at it a little bit."

You know rookie life can be tough.

Here's a video of Peyton Manning running, just because.

Defense puts on the pressure

After yesterday's practice saw the offense really abuse the defense, Denver's defensive line responded, especially at defensive end. Broncos pass rushers were consistently getting to and getting after the quarterback, abusing the likes of Chris Clark and Orlando Franklin each while surround Peyton Manning all morning.

Robert Ayers and Von Miller really shone in first team work, while Malik Jackson had a strong practice in mixed work. Shaun Phillips also had a few moments, and the secondary, led by Chris Johnson, bounced back after a rough Wednesday.

That player, as we've talked about several times now, is Duke Ihenacho.

Ihenacho has looked fantastic, making big plays (pick-six style big plays) throughout camp, and the Broncos are rewarding him as such. He's legitimately in the mix as starter now, and between he, Bruton and Adams, he looks best right now.

The status quo remained Thursday - Ronnie Hillman continues to see top reps, followed by Montee Ball, followed by Knowshon Moreno. All three had a decent practice, though Montee Ball's wasn't as impressive as yesterday's, and Knowshon probably had the best session. He was the only running back of the three to break into the end zone in red zone work, busting down the left sideline and finding pay dirt.

With Jacob Tamme out with a quadricep, it's an opportunity for Julius Thomas to continue to separate himself, and for Virgil Green to regain lost ground with more reps. Thomas is succeeding in his end; Green is continuing to struggle. He dropped another pass today and has not been as effective in pass and run blocks as in years past.

The top three continue to share reps and make plays. Demaryius Thomas was battling with Tony Carter today - it wasn't as one-sided in DT's favor as yesterday, but Thomas still came out on top more often than not.

Peyton Manning looked good when he wasn't falling to the ground. He was constantly under pressure though; at least once a player (Joel Dreessen in this case) wasn't where Manning expected him to be as his hot route, and Manning had to take him aside and explain the plan.

Brock Osweiler's mechanics look a little sloppy at times lately, like he's regressing slightly. It's mostly his sidearm throws, which are happening a few times every practice. Hopelly the Broncos nip this in the bud now because Osweiler did not often show that throwing motion earlier in camp.

A new name enters the Play of the Day fraternity - undrafted rookie safety Ross Rasner. Rasner had an incredible interception of a Zac Dysert overthrow. The pass was intended for a Bronco 10 yards ahead of Rasner but sailed high; the Arkansas product came out of nowhere and dove to the ground, rolling to the sideline with the football in hand.

I saw Harris stepping up as a leader today. With DRC out and Champ Bailey still getting limited reps, Harris, who is only in his third year, is being looked to as the top cornerback, and he's filling that role by example and through giving advice. He fit the bill physically today as well; on one play he had a perfect angle on a Peyton Manning throw to Wes Welker, closed on the ball, and broke up the pass with ease.

Runner Up: Robert Ayers. The big defensive end had a great day in one-on-one's and also got around Peyton Manning and Brock Osweiler on a few occasions in team work.

Runner Up #2: Nate Irving. Irving has had a quiet camp, which may be a good thing. He isn't messing up and just doing his job. But today he stood out as a player getting more comfortable in finding his lanes to cover and also sticking his nose in the mix. He even had an impressive pass break-up of Julius Thomas late in practice.

Runner Up #3: Me. I was like a kid in a candy store today. I got to talk to Tom Nalen about the Ring of Fame and his career as a Bronco for a story we'll get up later. But it was also a big reunion of 2005-2006 season era Broncos. Nalen, Jake Plummer, Jeb Putzier, Tatum Bell, and backup QB Preston Parsons (GO JACKS!) were all in attendance today. I started blogging when these Broncos were all a part of the team so those seasons hold a special place in my heart.

Clark has had a decent camp, but he was really exposed today. Malik Jackson abused him with an inside swim move in one-on-one's, while Robert Ayers got the upper hand (the lower, better-leveraged position) with a bull rush move in the same drill. In team exercises, Clark got beaten a few times by Ayers for either pressures or sacks (hard to tell in practice, since as a defender you don't actually touch the quarterback).

Runner Up: Quincy McDuffie. How you drop that pass is beyond me. Brock Osweiler threw an absolutely perfect spiral deep downfield into the end zone. Kayvon Webster was step-for-step with McDuffie, but the throw was absolutely spot-on and could not be defended. It hit McDuffie right between the 1 and 6 on his chest - yet somehow the undrafted rookie dropped what would have been a touchdown. Tough break for a kid trying to make a play.

The Broncos have a walkthrough tonight. The next practice is Friday at 10:25 a.m. and will be the last practice before Denver's stadium scrimmage on Saturday.