On the eight day of training camp practices, and with Terrell Davis in attendance, Ronnie Hillman and Montee Ball did their best to put on a show. They succeeded.

"I've been thinking about this moment since I was seven years old," an overwhelmed Montee Ball said to a group of reporters after Broncos training camp practice Friday. "Meeting Terrell Davis. And I did right now. So it's crazy for me."

Terrell Davis, arguably the greatest running back in Denver Broncos history, was in attendance at training camp on Friday, the eighth day of practices. Davis, who was on-site reporting for the NFL Network, met Ball after practice and discussed being a rookie and being a running back in Denver; you could even see Terrell giving Montee a few pointers (video). 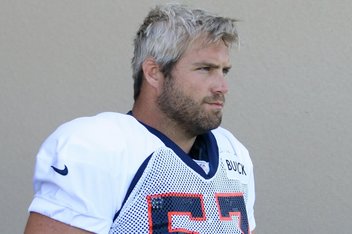 "I guess throughout practice I caught myself checking over and looking at him," said Ball, laughing. "I'm like, 'Man I gotta stay focused on what's going on in the huddle.'"

Davis also spent about 15 minutes talking to the media about Ball, Ronnie Hillman, and the history of his Broncos dealing with expectations and disappointing losses. We'll have much more from that interview later. For now, on to the Day Eight practice report.

Appropriately, it was the running backs' day.

Both DB Quinton Carter and RB Jeremiah Johnson, who missed Thursday's practice with respective knee injuries, were back at work today, along with DE Quanterus Smith. Smith had his left knee wrapped.

Players were in shorts instead of full pads Friday, likely a brief respite before the stadium scrimmage-practice to come Saturday. Derek Wolfe missed practice with an illness; Coach Fox said he sent him home not wanting to get his teammates sick.

I asked Coach Fox how much practice Clady would need before he would be ready to play in the regular season. "I like to give a guy about a week to do that," Fox said. "Whenever that is, we will be cautious. He is a very important cog to our offense and to our football team. But to put a timeline on it right now is kind of hard."

No new injuries to report. Regarding Sylvester Williams, Coach Fox said, "he is getting a lot closer."

I'm jumping straight into the Play of the Day today because it is appropriate, given today's running backs theme. Friday's big play was easily Ronnie Hillman's big 60-yard run during 11-on-11 work.

Hillman's job was made easy by some phenomenal blocking by Denver's o-line, particularly on the left side with Chris Clark leading the charge. Granted, players weren't in full pads, but there was a good deal of physicality today nonetheless (another scrum broke out) - the o-line's blocking was legit. Combined with Demaryius Thomas' block, Ronnie Hillman found a hole a few yards wide, then burst to the second level.

"That was a hole as big as the Grand Canyon," Hillman said after practice. "D.T. did a great job blocking downfield too. It was nice."

Hillman was left with one man to beat - safety Duke Ihenacho. Hillman bust a spin move that left Ihenacho trailing as he ran into the end zone. I'm not sure, if going full speed and full contact, Ihenacho makes that tackle or not, but Hillman burst through for a touchdown nonetheless. Easily the play of the day, and one of the best plays of camp.

It was the second day in a row where a fight broke out at Dove Valley, though this one was less chaotic as yesterday's 15-man cluster. Manning's first pass in 11-on-11 was batted up by Tony Carter and intercepted by Danny Trevathan. When Chris Clark went to bring him down, he pulled Trevathan's facemask, sparking the keg, so to speak. Things quickly elevated - literally. Orlando Franklin hopped on the backs of the crowd like he didn't weigh 320 lbs. The scrum broke pretty quickly. 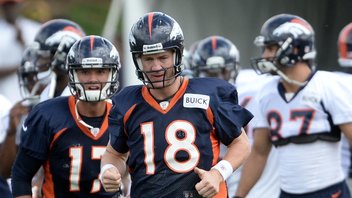 "You don’t ever want to hurt a teammate," Jack Del Rio said of the fight. "You always want to play with control. So I wouldn’t say (fights are) good, but at the same time this is a game of men. Sometimes men have differences that have to be settled."

"Peyton Manning Hypnosis" is a term I've used a few times on Twitter. It's the tendency to get used to how great #18 looks out there - becoming accustomed to every accurate throw and each perfectly-timed toss. I try to avoid it. It's hard. The Broncos, with Manning under center, and Eric Decker, Demaryius Thomas, and Wes Welker leading the charge, are really damn good.

So today I noted how well Manning was doing his check-downs and reading his routes. I noticed him talking at length to Joel Dreessen today - the second straight day doing so, clearly making sure he and his tight end are on the same page. He and Demaryius Thomas are in better sync this year than they were a year ago - they are clearly the most dangerous combination at Broncos camp (hopefully in any camp across the NFL).

Was Manning perfect? No. He had the interception that led to the fight, and he was off on a handful of throws in individual work. But when I look back and think of the training camps I attended where Kyle Orton and Tim Tebow were getting the majority of snaps, I have to pause and marvel.

Manny Ramirez manned the top spot at center, even with Ryan Lilja's arrival for his first Broncos practice. The 31-year-old Bronco snapped to Brock Osweiler with the two's in practice, which saw C.J. Davis, who was previously playing backup center, slide over to left guard. Davis took that guard spot from Ben Garland.

"My head's spinning a little bit," Lilja said yesterday of his fast introduction to the playbook. It may take him a bit to truly be able to compete for that starting job with Manny - he even reportedly had a few bobbled snaps today.

I didn't see either David Bruton or Mike Adams take any snaps from Duke Ihenacho at first team safety. I may have missed it, but it looks like the Broncos are getting more and more comfortable with a starting unit of Rahim Moore and Duke Ihenacho.

"We’re not getting ahead of ourselves," defensive coordinator Jack Del Rio said of Ihenacho. "It hasn’t occurred in a game or anything like that. But he’s worked hard and made plays and earned time to continue, to see if he can continue."

I came into this practice wanting to scout linebackers a little more closely - particularly at middle linebacker, where Nate Irving and Stewart Bradley haven't really done a lot to stand out, either positively or negatively. With the Broncos only in shorts today I wasn't able to fulfill that goal, but I did note some of the movements on the depth chart, and scout them in general.

Steven Johnson remains the most versatile linebacker on the roster, playing at all three positions in different packages at camp. I saw him with a nice pass break-up against the speedy Trindon Holliday late in practice, just a few plays after breaking through Knowshon Moreno's pass block for a pressure on Zac Dysert. Undrafted rookie Lerentee McCray had back-to-back nice plays as well, with a nice tackle near the line of scrimmage followed by a pass deflection on Brock Osweiler - no easy feat, given the backup quarterback's height.

As far as the roster goes, both Johnson and McCray are on the outside looking in due to the sheer amount of talent the Broncos have accrued. McCray is a prime candidate for the practice squad, but unfortunately Steven Johnson is not after being active for 11 games last season - he's ineligible. 2012's co-leading special teams tackler for the Broncos has to impress in preseason to justify taking a very valuable roster spot on a very talented team.

With Wolfe out, Malik Jackson saw even more time, while Kevin Vickerson and Terrance Knighton continue to solely split first team reps with Sylvester Williams on the mend. Sealver Siliga had a nice practice, getting in my notebook a few times.

Check out this video of Knighton, Mitch Unrein, and Jeremy Beal hitting the bags.

Bubba had a strong practice. Maybe he read our stock report on risers and fallers in camp, because boy did he need it. With Greg Orton and Tavarres King continually making plays, Caldwell had become the forgotten man, but he really stood out to me today. He had a great, tough grab against newcomer Nigel Malone in red zone one-on-one work, then followed that up with another impressive touchdown against Kayvon Webster. Both were tough grabs near the edge of the end zone - Caldwell caught the ball and got his feet planted both times. He and Brock Osweiler were finding a nice rhythm in early hurry up work - he hauled in two consecutive catches there - then capped off his practice with another good catch from Brock in the corner of the end zone.

Runner Up: Eric Decker. Specifically, against Champ Bailey. In one-on-one goal line/red zone work, Decker and Bailey squared off three times. Decker beat Champ for a very tough catch in the corner of the end zone the first go around. The second time, Decker really burned Bailey, cutting outside so fast Bailey had no chance of making a play and was left in Decker's dust. The third time, Bailey was able to jam Decker up, knocking him off his route, but Decker got the better of Bailey overall in that fun battle.

Runners Up #2: Running Backs. They got to meet and greet the great Terrell Davis, who was very open with the current Broncos. Just too cool. Both Ball and Hillman had solid days, not even including Hillman's big run.

Terrell Davis and Ronnie Hillman share a laugh during practice this morning. pic.twitter.com/kRLc2sopGS

Who Lost Today - Nobody

A few players struggled here and there, but everyone I thought started to struggle played better later. Except for Zac Dysert, but I'm tired of picking on Zac Dysert. #TeamKatz

The next practice is the big one! The Summer Scrimmage at Sports Authority Field at Mile High Stadium. Gates open at 5; practice starts at 7. That makes today my last practice this year at Dove Valley. It's been my best camp experience yet, by far. I'll finish out at the stadium tomorrow.