Manning, Broncos brave elements to give fans their Summer Scrimmage

Share All sharing options for: Manning, Broncos brave elements to give fans their Summer Scrimmage

A lightning and rain delay of over 40 minutes threatened to send 44,439 fans home without the practice they came for Saturday night at Sports Authority Field at Mile High.

Then Peyton Manning and company decided to come out onto the field anyway.

And slid headfirst, slip-n-slide style, across the field, over and over.

"It sounded like we weren't going to be able to do it at all," Manning told reporters after practice. "Then some of the players got together. We were kind of talking about, remember in Bull Durham when Kevin Costner went out and slid at home plate. He was trying to get the game cancelled, we were just trying to do something during that time. I think that made Coach Fox put the scrimmage on."

Within ten minutes, practice was back on.

"We talked about it," Coach Fox said. "I wasn't sure we were even going to be able to come out. But once the lightning got out of the area, we made a decision to go out and give the fans something to cheer about. I think it was a fun opportunity for everybody."

Manning and the first team offense ran 12 plays, including a 10-play touchdown drive that saw Manning go 4 for 6 for roughly 55 yards. The drive culminated with Manning rolling right at the 7-yard line and throwing off his back foot, across his body, to find a streaking Demaryius Thomas in the back of the end zone.

Broncos fans also got a first look at Manning's new weapon: Wes Welker. The combination did not disappoint, even if the results did.

Welker was targeted three times, making one catch. The first attempt bounced off the receiver's hands (blame the rain?), but then Welker took a bubble screen 15 yards that would have gone a lot further if not for David Bruton's shoestring tackle. Later, Manning went after Welker in the front corner of the end zone, but Omar Bolden put his hand in the path of the ball at just the right moment to prevent the touchdown. 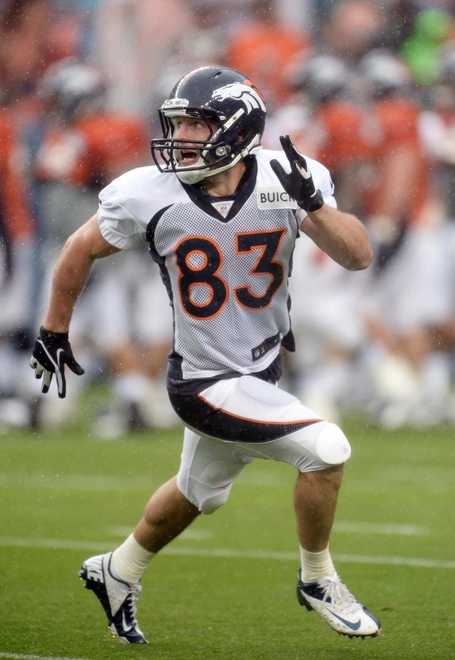 "Wes Welker, on those inside screens, that has been a big part of the Patriots' success and his success," Manning said. "He is good once the ball gets in his hands. Those screens are sometimes better when it is full speed, and you are going live, and linemen can get some guys on the ground. Anytime we can get the ball in Wes' hands and give him a chance to get yards after the catch, that's something's he's done, and I know that's something Adam (Gase) wants to do this season."

But it was Demaryius Thomas who remained Peyton Manning's most productive target. Manning, who wore gloves on both hands during the team exercise, found Thomas deep downfield for a 20-25 yard gain with rookie Kayvon Webster in coverage. Later, D.T. took a bubble screen five yards, before tapping off the drive with the touchdown catch.

A Night at Sports Authority Field 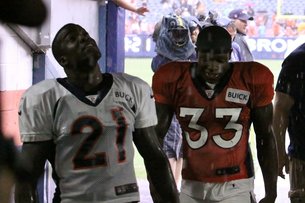 "D.T's had a good camp," Manning said. "He made a really nice move on the one down the sideline, had a go route. Then he made a heck of a catch kind of on a sprint out to the right. He's kind of the third read, and he's kind of coming across the back of the end zone. Anytime you catch that kind of pass, you know you might take a hit after that. For him to hold onto the ball, that was a heck of a play."

Not only did Peyton and the Broncos get a chance to put on a show for the fans, they also got a unique opportunity to practice in poor weather. Manning said he sees the benefit in that as well.

"We may see this during the season," said Manning. "In training camp and in preseason, the more situations you can get, the better. So to get a little weather, I think it will be good film to learn from. I think that was a positive."

"I think all in all it was good," Coach Fox said. "We got a chance to see what it was like in sloppy conditions."

The second team offense, led by Brock Osweiler, squared off against the first team defense, led by the likes of Champ Bailey and Von Miller. As one might expect, the defense came out ahead, preventing Osweiler's Broncos from scoring a touchdown. But the offense still had a few moments. 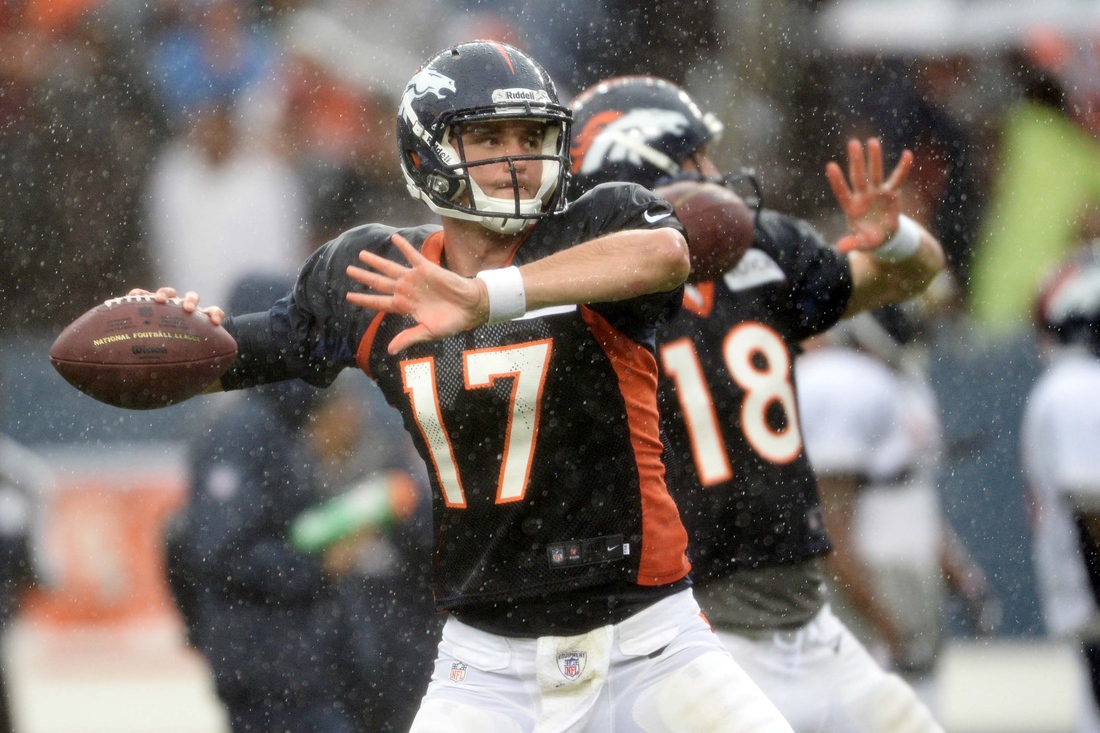 Osweiler in particular looked impressive, finding an open Virgil Green for 15 yards on one throw while hitting Jeremiah Johnson short on another. The rain-drenched football slipped out of his hands at one point, and Osweiler ran back for the fumble with Von Miller in hot pursuit, but there wasn't anything about his play that looked particularly bad.

Nate Irving had a nice pass breakup on one attempt to Virgil Green; Duke Ihenacho had a terrific tackle for loss on Knowshon Moreno, shooting through the gap; Chris Harris had Greg Orton consumed in coverage on another play that netted him a pass breakup.

"They've got some good guys out there but it's our job to go out there and stop them," Wesley Woodyard said. Then he added, "If it had been the first team offense it would have been zero points too!"

Fans appreciated, and fun was had by all

It's remarkable to me that this scrimmage took place. Sure, there were nearly 45,000 in attendance, but those conditions were the makings of a torn Wes Welker ACL or a sprained Von Miller ankle.

That was one fun scrimmage! #BroncosUp

I said it once, ill say it again. BEST FANS IN THE WORLD #broncoscountry

"I think it is unbelievable, and that was a big reason for the slip and slide," Fox said. "We've got great fans. For it to be the conditions it was and still have 45,000 fans is pretty awesome."

"It was fun," said Manning. "We got to do it, certainly for the fans to have stayed out here the whole time. It says a lot about them and how much they care about football out here."