The Ravens ARE special on Special Teams.

The Denver Broncos will face the Baltimore Ravens on Saturday for an AFC Divisional Playoff game in a rematch from Week 15. This time though, it will take place in the Mile High city. The whole town of Denver is "United in Orange." 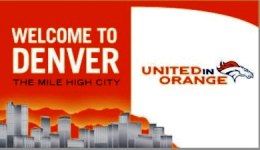 I haven’t heard of anyone painting their house Orange yet, but other than that, the atmosphere is not unlike the 1977 season. Broncomania is back!
Meanwhile, there is still work to do and the Broncos cannot afford to let up on the gas pedal. What’s better than 11 wins in a row? Why 12 of course! Wouldn’t that be special.
And speaking of special, it is time to look at the Special Teams matchup between the Broncos and Ravens. According to Football Outsiders, the Baltimore Special Teams Unit is the best in the league. The Broncos have regressed from the 10th position in Week 15 down to the 13th spot. Pro Football Focus has the Ravens 1st and the Broncos 4th. However, Denver does have a better Punter rating and we all know that Britton Colquitt is in the upper echelon among 4th down footmen. Jacoby Jones vs. Colquitt and the Broncos coverage Unit should be the Special Teams highlight matchup for this contest.
KICKERS
Rookie Justin Tucker is Baltimore’s Placekicker. He went 30 for 33 (90.9%) on his Field Goal Attempts in 2012, with his three misses coming in the 40-49 yard range. His longest Field Goal conversion this season was 56 yards and he made all 42 Extra Point Attempts. Justin has kicked off 88 times with the average landing area being 2 yards deep into the end zone. He shouldn’t have any problem with that in Denver. 49 of those kickoffs have gone for Touchbacks (55.6%) and 36 were returned for a 23.4 average.
During last week’s Wildcard win over the Indianapolis Colts, Tucker converted a 23-yard Field Goal and 3 Extra Points. The Colts did not have a single Kick return as all 5 kickoffs went for Touchbacks.
7th year veteran Sam Koch is the punter and Holder for the Ravens. He has punted 83 times with a gross average of 47.1 and a Net of 40.8 yards. He has 7 Touchbacks, forced 13 Fair Catches and placed 28 Inside the 20 yard line. 49 have been returned for a 7.81 yard average.
Sam punted 4 times last week, with an average of 33.3 yards. He placed one Inside the 20, one Out of bounds and 2 Touchbacks, so none were returned.
LONG SNAPPER
The Long Snapper for the Ravens is Morgan Cox. A 3rd year player out of Tennessee, Cox, 6-4, 241 lb. long snapper, was signed by the Ravens as an undrafted free agent in 2010. He earned the starting job after Baltimore released Matt Katula on August 14, 2010. Morgan has played 27 career games with the Ravens and has 2 career Tackles, both in 2012.
RETURNERS
Jacoby Jones is the Ravens primary return man. Tandon Doss, Lardarius Webb and Ed Reed have also dropped back to field punts, but Jones is the guy. Jacoby has returned 37 punts for an average of 9.2 yards and 1 Touchdown. He has called for 16 Fair Catches.
Jones ranks second in the NFL with 2,147 punt return yards since 2007. He has 7 career return Touchdowns (4 punts, 3 Kickoffs) in his 6-years in the league.
on Kickoffs, Jacoby is averaging 30.7 yards per touch, making him one of the most dangerous return men in the league. He has 1,167 return yards on 38 kickoffs, with 2 Touchdowns this season. Rookie Deonte Thompson has returned 15 kickoffs for a 25.9 yard average.
COVERAGE
Linebacker Brendon Ayanbadejo leads Baltimore with 13 Special Teams Tackles. Free Safety Sean Considine (9 TKL, 1 AST, 1 MT), Running Back Anthony Allen (9 TKL, 3 AST, 5 MT), Cornerback Chykie Brown (8 TKL, 3 AST, 3 MT), Cornerback Corey Graham (7 TKL, 1 MT), Linebacker Albert McClellan (8 TKL, 1 AST, 1 MT) and Strong Safety James Ihedigbo (6 TKL, 3 MT) are the main coverage guys. Graham is their best Special Teamer.
Vonta Leach (Ankle), Dannell Ellerbe (Ankle) and David Reed (Shoulder) are on the Injury Report this week and that may have a factor in the game on Sunday.
The Weather conditions may play a role in tomorrow’s game as well. The forecast still calls for a slight chance of Snow and a temperature range of 4-19 degrees.
Nevertheless, there will be a sea of Orange enveloping Mile High Stadium tomorrow.
Go Broncos!
Follow Me on Twitter!
Get your MHR T-shirt here
Like Me on FaceBook!