The Broncos defense imposed their will on the Ravens the first time around. Ray Rice went for 38 yards, Torrey Smith had just one catch, Anquan Boldin was completely shut out, they forced a couple key turnovers---including the dagger pick 6 by Chris Harris, it was just a great effort. While people are quick to point out how undermanned the Baltimore defense was, they have no excuse when it comes to the offense. All their skill position players were shut down. Flacco put together some nice numbers in garbage time but the outcome of the game was never in question. In fact here's a breakdown of both of their TD's: 1) three Broncos missed tackles on Pitta 2) Pitta made a great leaping catch. Nothing about them indicated any sort of dominance by the Raven offense, and both occurred with the game well in hand.

What I want to do with Part 2 of this film study (if you missed Part 1 find it here) is break down the beginning of the game and highlight some things the Broncos did schematically and some things that are indicative of success today on gameday. Let's start with this fact first: The Ravens first 5 drives were all three and outs and accounted for 44 yards total, 1 fumble, and of course no first downs. Here's a crash course on the both the Ravens offense and Broncos defense before I get into more details:

Base is run from 21 personnel (two backs, one TE). More often than not, they will set up in some variation of "I" formation. They used a lot of offset "I" the first time around. More often than not, the skill position players are Rice, Leach, and Pitta. They are a throwback of sorts because when I go back and watch some vintage Broncos from the SB years, I see the same formations (except they should in no way be confused with Elway, Davis, Griffith, Sharpe, Smith, McCaffrey). When they move into 11 personnel it's almost exclusively through shotgun and Tandon Doss becomes the 3rd WR.

Base is technically a 4-3, but don't get into labels with this group. They do a ton of different things. It might be wiser to label the front 7. At ends are Dumervil and Wolfe. Inside you'll have some combo of Bannen, Unrein, Vick. Von is the Sam, Brooking is the Mike, and Woodyard is the Will. Outside you have Champ and Harris and at safety you have Rahim Moore and Mike Adams.

In passing situations, it gets complicated. I've seen so many different fronts and combinations this year, I'm just going to give you some general idea about the rotation. It seems more like an odd man front here. Wolfe kicks inside with Ayers, Vickerson, usually in the rotation with him, Von moves to LDE, Brooking exits and is replaced either by rookie Danny Trevathan or DJ Williams, Harris kicks inside to cover the slot, Tony Carter becomes the #2 on the outside, and depending on what they want from safety you might see Jim Leonard join Adams and Moore. Hell, I even saw a 3-1-7 look against the Ravens where they used 4 safeties (Bruton, Adams, Moore, Leonard) and 3 corners (Champ, Harris, Carter).

The point is they have a lot of flexibility and a lot of it is due to the huge amount of versatility in the front 7 as well as the ability of all of our corners to blanket receivers man to man. Rahim Moore almost always plays deep centerfield these days which also frees up Adams to do other things.

- Doss, Pitta, and the outlets from the backfield accounted for 8 of the 9 targets

It was amazing to see how much the mixed things up over the course of 15 plays. Also important to note, on many running plays the safeties were just fine to retreat back into Cover 2 regardless of the threat from the run. This tells me they were aware of the deep threat of Torrey Smith, and it tells me they trusted the other 9 defenders to do their jobs. They also played more zone than I expected, but it was also a good thing to watch---they were disciplined.

I honestly believe they wanted to confuse Flacco and throw the kitchen sink at him, and it worked as we'll see from a few plays. What follows is the drive chart for each Ravens' possession. For offense you get personnel and result of the play and for defense you get the kind of defense and coverage.

One thing is for sure---the Ravens passed too much on early downs and put themselves in trouble on 3rd down. You will die a slow and painful death against this defense if you consistently have to attack it from 3rd and long.

Gonna analyze 6 different plays from this game----and you can find where they occurred on the game by referring back to the tables---they are labeled 1-6.

Broncos are lined up in a three man front. The LB's are going to come on a blitz and stunt as well. 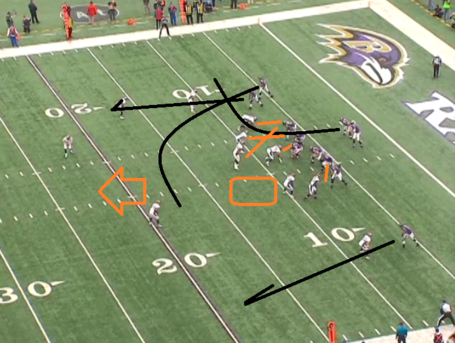 The rush panicks Flacco and he throws it eventually to his receiver on the bottom of the screen (Doss). He has Ray Rice wide open in the flat for what would have been a nice gain. 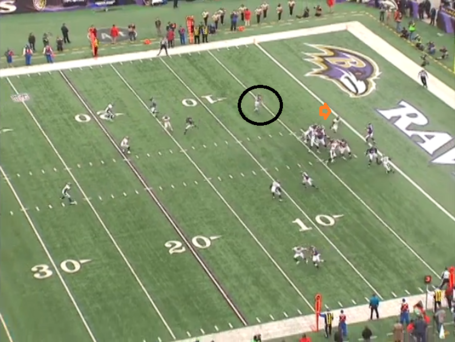 Instead he overshoots Doss. IN-COM-PLETE! 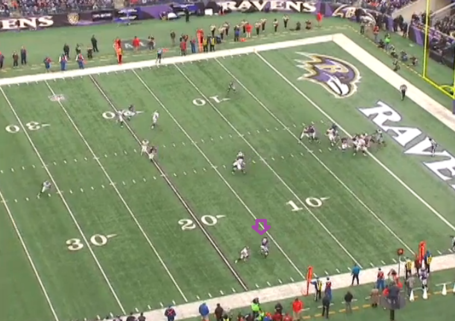 The front moved around a lot presnap and it it confused Flacco. How do I know this? He didn't check into a better protection, and he misidentified where the pressure was going to be coming from. The coverage was also fantastic (except in the flat).

(2) Pierce may be fast, but so is our defense

Some rumblings have been made by Ravens fans that rookie back Pierce is a wildcard because of his speed. What we all know as Broncos fans is that our defense is one of the fastest, most athletic defenses in the NFL. On this one, the Ravens will pitch to Pierce and pull some linemen. 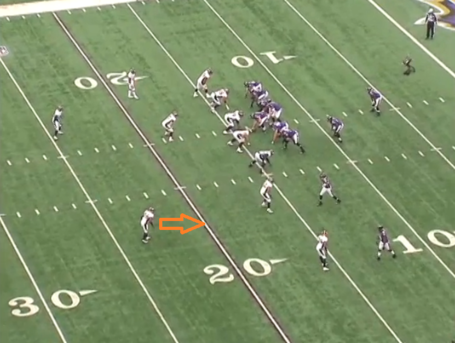 Rahim Moore is going to sense run and crash into the box at the snap. 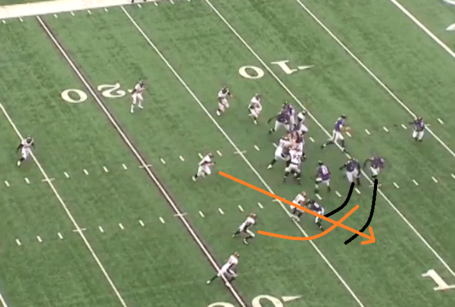 Moore will split the double team. He'll miss the tackle but he slows down Pierce enough to allow Brooking to force him out of bounds for no gain. 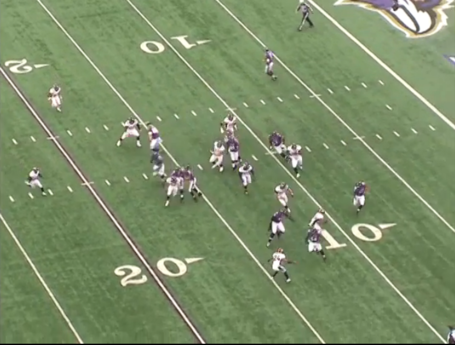 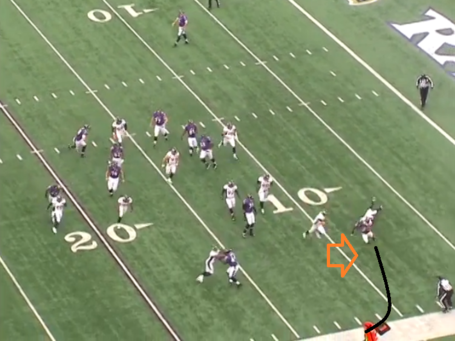 Good play by Moore-he's really progressed in his sophomore season.

Wolfe has been an unsung hero all season, though he's logged a good amount of sacks as a rookie, it has been his role overall that has helped the Broncos. Wolfe two gaps quite a bit which means he's taken on a lot of double teams. On this one, he splits the double team and disrupts the play between the tackles enough to hold the ball carrier to no gain. 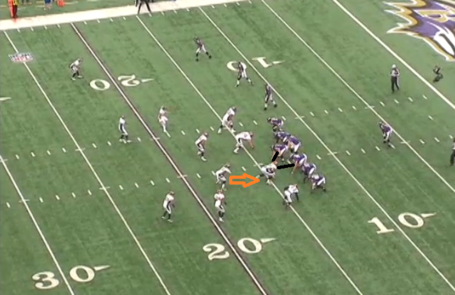 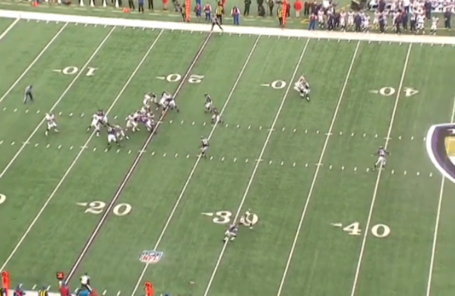 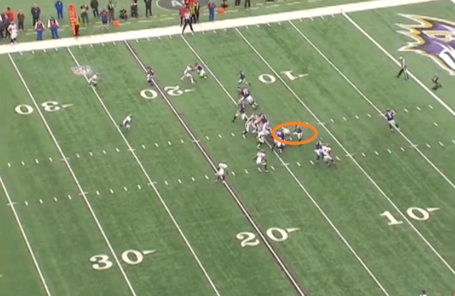 Wolfeman....he IS the one that knocks

On this one the Broncos are gonna play Cover 2 over the top and man underneath. The guy with the arrow at LB depth is Robert Ayers----yes Ayers. The Broncos are showing a three man front but he comes as the 4th rusher. He along with Dumervil pinch the pocket and pressure Flacco. The throw is good but it falls short of the 1st down. Credit both the pressure and the tight coverage across the board---Ravens never stood a chance. 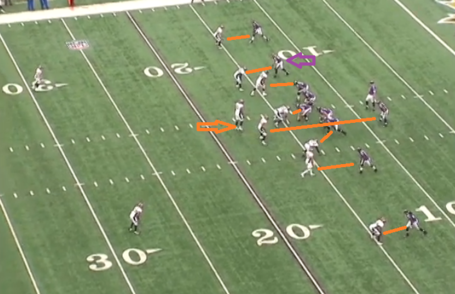 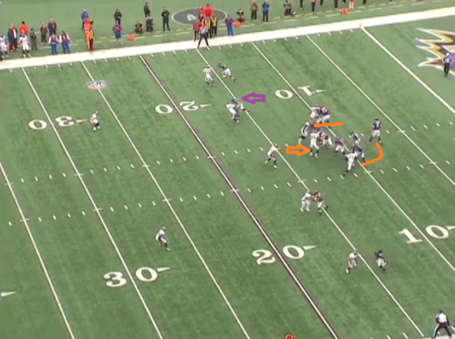 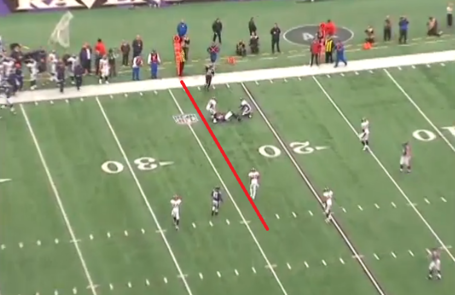 One way to neutralize the pass rush is through the screen game. An aggressive front gets sucked in only to be beaten on the backside. But the Broncos aren't just aggressive, they're smart as well. Credit both Bannen for diagnosing it and Von for disrupting it. 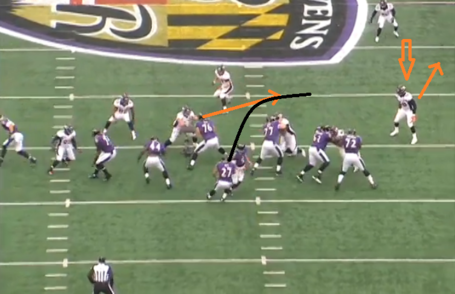 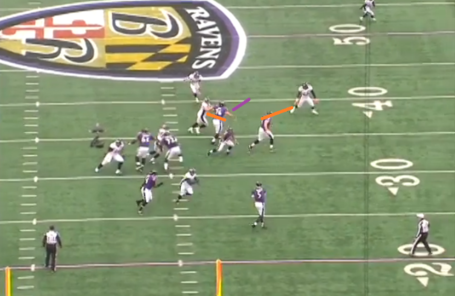 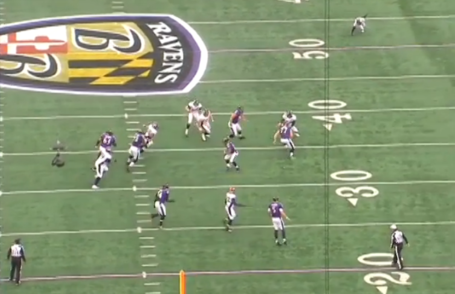 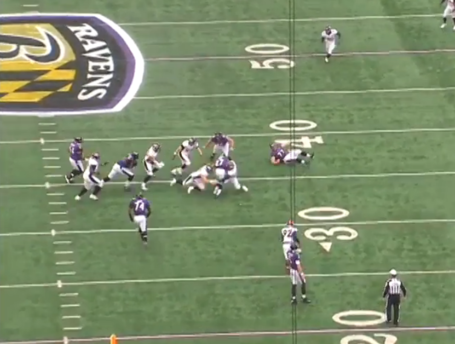 I've analyzed a lot of film in a short time, but I'm at a loss here. The Broncos are playing a 3-1-7 look with four safeties, three of which drop deep. The corners of course are Bailey, Carter, Harris, while the added safeties are Bruton and Leonard. One of the safties brackets the one of the underneath routes. So...what sort of coverage am I seeing? Regardless Flacco misses Boldin the they have to put yet again. 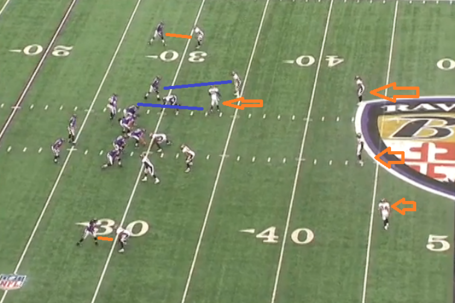 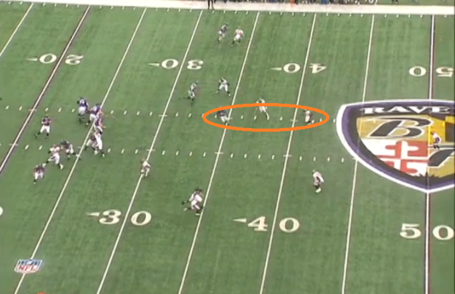 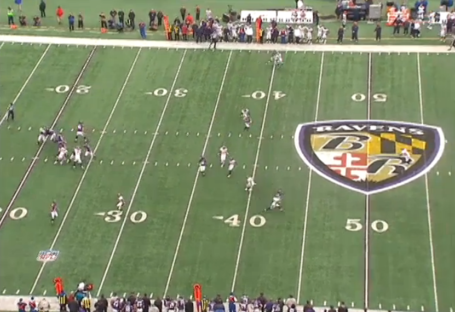 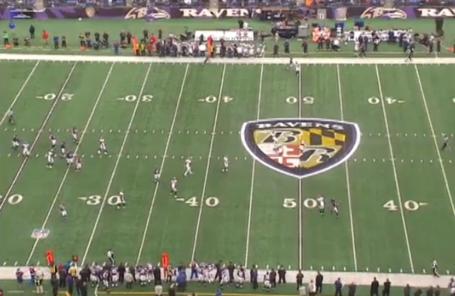 The Broncos are a top 5 defense in points and yards for a reason---they play with sound fundamentals and take care of their assignments. I have a hard time visualizing the Ravens doing much if anything against us in our home. Our front 7 has shut down the run and our secondary can man up across the board, it's no wonder the Ravens are 10 point underdogs!

Set the edge and tackle. When in doubt keep it simple.

He shutout Boldin for no catches for the first time in 7 years.

Very, Very, disciplined the last time around. Don't cheat up and bite on the playfake.

The speedster needs a lesson from Bailey

We may have only had two sacks last time out, but the Broncos certainly know to rush the passer. Rattle Flacco with our pass rush and our home crowd and we'll see the same mediocre passer that has become a household name on the road.

I've heard a lot of "rah rah" from some uppity Ravens fans this week. Fact is healthier defense or not, they are not on par with our talent. The only way we lose is if we beat ourselves. I don't foresee a sloppy collapse after so much consistent play. Bottom line, it shouldn't even be close.