Just like most of the big plays in the game, this could have went very differently.

Hello MHR, here's hoping that the sting has wore off by now and we can go back and look at things more objectively! Only taking a look at one play in this edition of "MHR Film Study" and that would by Peyton Manning's interception in overtime. Before I break out the screen shots here is a blow by blow of what happened:

- Paul Kruger pushes Franklin back into the pocket, but Manning still has a decent amount of space. The cumulative effect of the pass rush to this point makes Manning take off to his right.

- Stokley breaks his route upfield and waves his hand to indicate that he's open. Manning still rolling to his right, with no opportunity to stop and set (Kruger now in pursuit) makes a weak throw across his body. It was unclear from the broadcast if the ball was underthrown or badly placed---it was underthrown and you'll see why.

You're going to see from the film that if Manning had enough time to set and throw it would have gone for a big gain. You're also going to see that it was a poor decision for him to roll out to his right, he still had a bit of time to sit in the pocket, or he could have rolled left where virtually no one else was. Let's take a look at it. 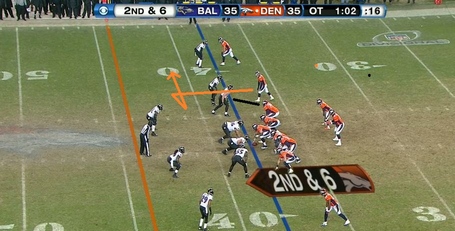 Gonna focus only on Stokley's route here, it originally appears to be an in/out pivot route. 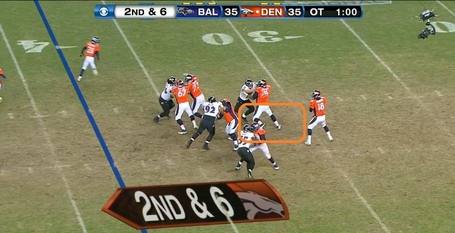 Here's the point where Manning decides to take off, and though Kruger has pushed Franklin back in the pocket, Franklin still seems to be good leverage as his hands are underneath Kruger's. Also note the space Manning still has, in fact he could step up and make a throw with this pocket. Problem is everyone is covered---his checkdown Hillman is about the only one without a man draped on him. Probably should go here. 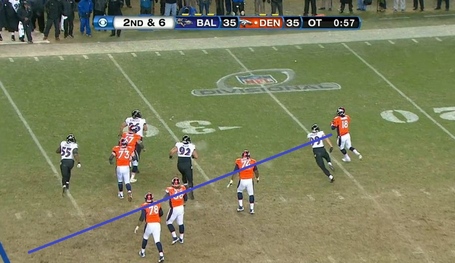 He doesn't and after he rolls to his right, Kruger disengages Franklin and pursues. On the backend as we'll see further down it freezes the corner on Stokley and Stokes takes off down the field. Manning makes the throw on the run without time to set and it is a weakly thrown ball. 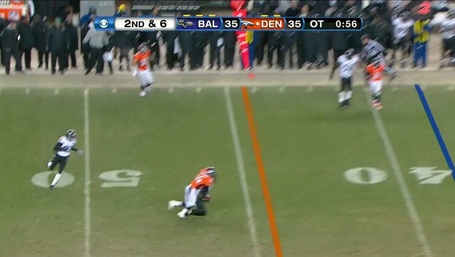 Stokes has to come back to it and tries in vain to pop the ball out. Let's get a view of the entire field. 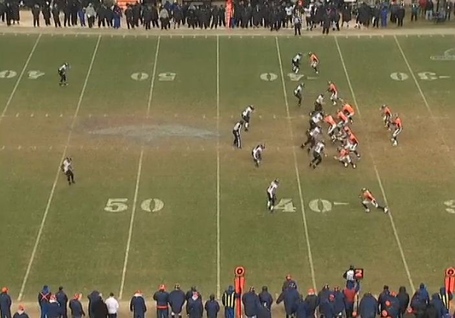 Two deep safety (a theme for much of the game on defense for the Ravens), they are in nickel with Suggs lined up as a DE on the right (think of Von Miller on passing downs) 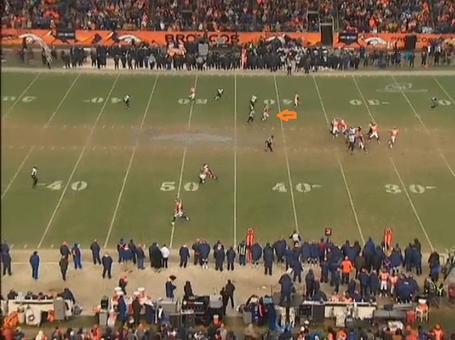 You can see to the left (or bottom of the screen) Suggs has not gotten pressure, in fact the entire left side of the field is open for Manning to roll here. I'm guessing he doesn't because there are 3 receivers on the right side, and it is more natural for a righty to roll out to his left. (Remember that being one of the things teams took away from Tebow at the end---rolling to his left?). 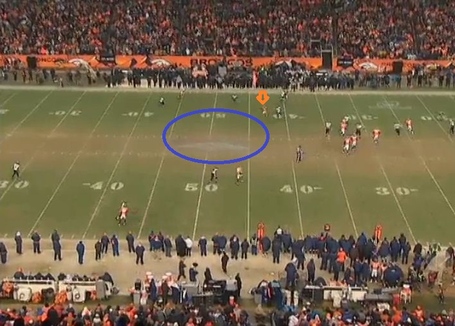 Now, the safety up top has bitten on Decker meaning the whole middle of the field is wide open. Stokes has the arrow and you can see he already has a good step on his man. If Manning can muster enough arm-strength, no doubt this goes at least to the Baltimore 40-yard line.

- Some will use this as evidence that Peyton has a weak arm, or the cold made his arm weak. Not exactly true. Manning has an average arm and always has. Where I fault him is trying to get the ball there knowing his limitations. Beach the ball and move to 3rd down. I saw plenty of other throws throughout the game that were indicative of his output shown in the regurlar season.

- Stokley is the only receiver to try and help Manning out once he breaks the pocket. Pretty ironic since both Decker and Thomas were adept at doing this last year.

- Manning could have and should have stayed in the pocket or rolled left. No reason for him to go to his right, and it gives Kruger an edge as he can pursue freely without being blocked.

- Before any of this other stuff happened, he should have just checked it down. Hillman had some space because the LB was a bit late coming over.

When Manning says it's a throw he'd like to have back, it's for good reason---many things could have been different to change the final result from being a pick.

Looking ahead to the offseason

I'm not a draft guy, and other writers here know way much more than me in that regard. So I won't be putting up scouting reports or mocks (until my cartoon themed mockery). Instead I am going to concentrate on bringing the community the following:

- MHR University: I know there have been several versions of this before, but it would be awesome to spearhead another series breaking down the X's and O's of the game. Look for anything and everything to be covered here so that we all get wiser about understanding the game we love.

- Email me if you have specific things you'd like to see talked about/analyzed, always open to suggestions.

Thanks guys, and once again it has been my pleasure working with the other staffers to bring you the best Broncos coverage on the web! Cheers, and GO BRONCOS!!!!