In fact before I get into some breakdowns, here are all the numbers involved throughout this not so close rivalry:

Outside of the first two games against the Ravens in his career, Peyton Manning has never lost. That makes it nine games in a row which includes two victories in the playoffs. Some other quick hits:

- The only time Manning has faced the Ravens twice in the same year (regular season and playoffs), his teams won 31-3 and 20-3 respectively.

Here's a recap of both previous playoff meetings as well as the last meeting between the Broncos and Ravens:

The Ravens came into this game with the NFL's #1 defense (12.6 PPG), a 13-3 record, a division championship, the #2 seed and 1st round bye. The Colts went 12-4 won the South and edged out NE for the #3 seed. A three and out and a Todd Heap fumble in the first two drives were countered by 2 Colt FG's. Manning ran a lot of no huddle the first drive and led his team to the Raven 5. Unfortunately three runs later yielded just a few yards wasting this scoring opportunity. After a short punt and decent return, the Ravens finally managed a first down and a FG of their own. On the subsequent Colt drive, Manning was picked off by Ed Reed on a deep attempt to Dallas Clark. A healthy helping of Jamal Lewis for the Ravens punched the ball inside the Colt 5....but it all went for naught when Steve McNair was picked off at the 1 yard line.

Starting a drive deep in their own territory, Manning slowly led his team down the field to the Baltimore 34, where on 3rd and 6 he threw deep incomplete to Dallas Clark. Vinatieri had his 3rd FG of the game, this would conclude the scoring in the first half in a very defensive and mistake filled game.

The Colts began with the ball in the 2nd half and marched down the field into Baltimore territory on the strength of a few big passes to both Joseph Addai and Dallas Clark. Once again Baltimore toughened up and held the Colts to another FG. The teams traded fruitless drives throughout the 3rd quarter until Baltimore gained some momentum and added a 51-yard Stover FG. At this point the game is 12-6 Colts, but with the way both defenses were playing 6 points seemed like a couple TD's. Deep in their own territory facing a 3rd and 17, Manning aired it out for Marvin Harrison but was picked by Ed Reed. This could have been the penultimate momentum change---the Ravens had the ball in good field position. They marched into Colts territory when Steve McNair threw another INT killing yet another scoring drive. This set up the Colts for the final dagger.

With approximately 7 minutes left, The Colts rode Dominic Rhodes down the field chewing the field and the clock. Two key 3rd down pickups---one by Manning, the other by Rhodes on 3rd and 4 ensured that the Colts would all but seal the deal. With the Ravens out of timeouts and the 2-minute warning past, Manning took a knee to set up Vinatieri's final FG of the game with 26 seconds left. Colts win 15-6

This game was a slugfest and both teams made costly mistakes. None were more costly than McNair's though who's two INT's killed two scoring drives. The yards were close, the averages per play were close, the firstdowns were close, however the Colts were far more efficient on 3rd downs converting 42% to the Ravens 18%.

The Ravens again came into this game on the strengths of their #2 defense. They were a 9-7 wildcard team that upset the New England Patriots in Foxboro the week before (this was the Pats first home playoff defeat in Gillette Stadium). The Colts on the other hand steamrolled their way to a 14-2 record on route to the #1 seed and homefield throughout. This was a team that flirted with perfection until the guys in charge pulled the plug against the Jets in game #15.

Where the previous game was marked by total defensive domination and a multitude of mistakes, this one was marked by four Ravens turnovers and an efficient day of passing by Manning. The Colts took the opening drive and marched down the field for a quick FG. On their best drive of the game, the Ravens and Flacco responded by driving the ball inside the Colts 10. After a McGahee 2 yard run on 1st down, Flacco threw two incompletions to kill the moment. The Ravens settled for a FG.

After trading several 3 and outs, the Colts finally figured out the Ravens D. In Manning-esqu fashion, he led the Colts down the field going 8-9 for 72 yards converting a key 4th and 4 along the way. The drive was capped off with a 10 yard TD pass to Austin Collie. After the Colts D forced yet another Raven 3 and out, Manning chewed up the Raven defense once again. Good field position and a Ray Lewis roughing penalty furthered the Colt cause and Manning finished the drive off with a 3-yard strike to Reggie Wayne. Going into halftime the Colts led 17-3.

Neither team got things going in the second half and it took the Colts until the beginning of the 4th to tap on a FG to go ahead 20-3. The final three Ravens drives were capped off by a fumble, an INT, and an INT respectively. Ray Rice was held to 67 yards, Flacco was held to 187 yards, and the #1 seed advanced to the AFCCG.

At this point it's interesting to note the similarities. Both times Manning faced the Ravens in the playoffs in the Divisional Round, both times his teams won to advance to the AFCCG. Is the 3rd time the charm for the Ravens? Nah...

This became a laugher but the Ravens for the most part played tough in the 1st half. Two key first half Raven turnovers led to 10 first half Broncos points. The first came on a Joe Flacco fumble forced by Justin Bannen. This led to a Prater FG. The next came on a stupid, stupid throw by Joe Flacco. Deep in Bronco territory down 10-0, Flacco threw for Anquan Boldin in the left flat, except Chris Harris jumped the route, leaped for the ball, and took it back for the house. Flacco tried as he might to take Harris down but ran out of steam...the lasting image of this play? Flacco lying face down in defeat for quite a while. In fact let's take a look at that play: 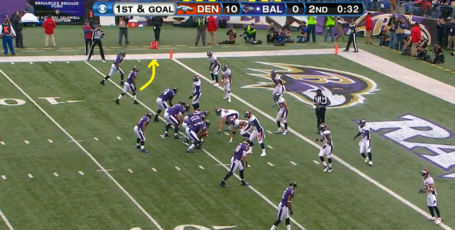 Here's where Joe is looking the entire way 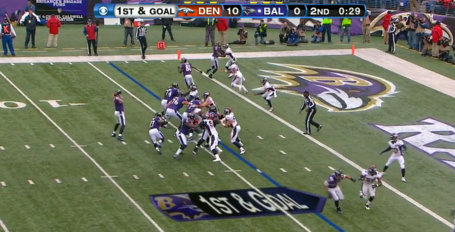 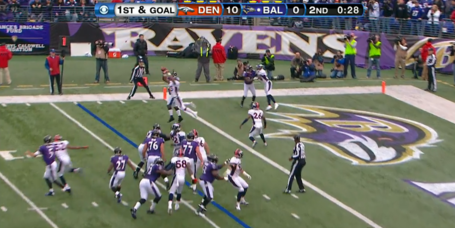 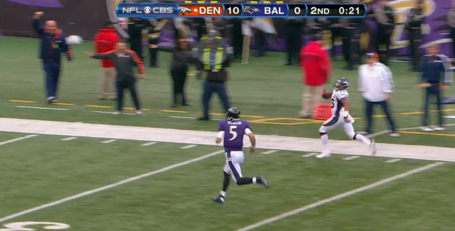 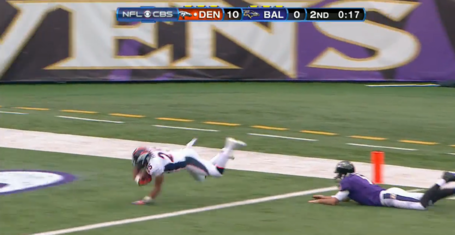 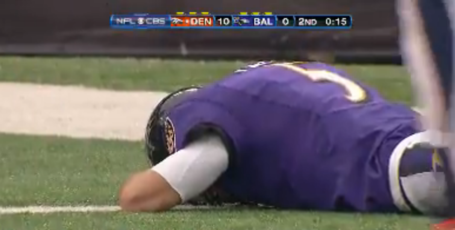 The 2nd half kept the momentum going. The Broncos scored two 3rd quarter TD's to make the game 31-3 going into the 4th. Two garbage time scores later and the Broncos still double up on the Ravens 34-17. One of the story lines throughout the game was the banter back and forth between Eric Decker and Ravens CB Cary Williams. Over and over Decker brutalized Williams with the deep comeback. Throughout the game they dialed it up for an easy first down. Little did Cary and Ed Reed know, though, that Manning and Decker were setting them up. This is chess after all, not checkers, and in a great post by our own ch3cooh1 we found out that both were fooled: Hey, where ya goin' Ed?

Let's take a quick look at that play:

Decker is very simply going to fake the comeback and keep going. It's a double move sold well by a fantastic shoulder shake. Ed Reed jumps the route and is no longer over the top. The double move slowed down Cary and Decker was wide open. 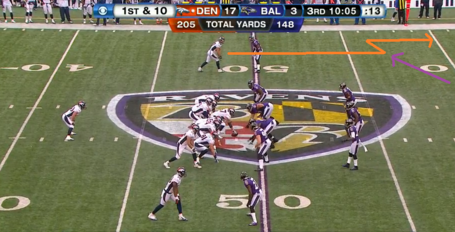 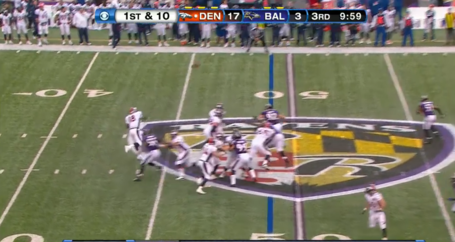 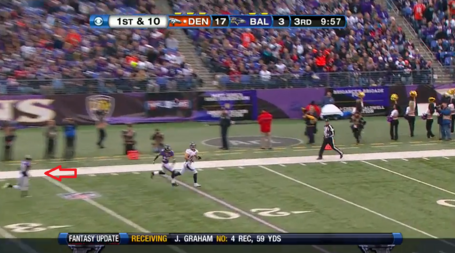 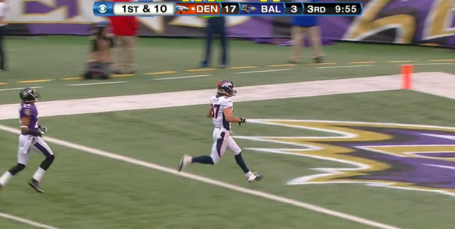 Manning has owned the Ravens, they are his property. And I don't see any reason why that should change Saturday. This is the playoffs so nothing is guaranteed, but we're simply the better team. An inconsistent Flacco and an aging defense will have trouble keeping up with our stud team. Am I overconfident? Perhaps, but everything would have to fall apart disastrously for our Broncos to lose. With that in mind, keep a look out for some serious analysis the rest of the week, in fact here's a tentative schedule for some posts I have in mind:

Saturday: Important matchups and keys to the game

I'm going to put a lot of work into this my friends so I hope you'll keep a look out and enjoy the information I come up with. Until then.....T-minus 4 days and counting till the Ray Lewis retirement party....tick tock, tick tock...you RSVP'd yet?