Hello folks, here to break down the 52-yard bomb from Manning to Decker.

I would call this a verticals concept.  Each receiver except for Wes Welker has an option route out of a basic vertical or go route.  The key for both receiver and Manning is to read the coverage to see what might be broken off.

Against the Eagles on this play the Broncos come out in 11 personnel (3-WR) with DT and Welker split up top and Julius Thomas and Eric Decker on the bottom.  It is a 2x2 alignment.

Presnap the Eagles show a cover 2 shell with off man on the outside.  They are in nickel defense with a 3-3 front. Their OLB stands up on the line and looks like he will be rishing rushing.  That leaves JT with off man from the safety, but the Eagles also choose to bracket him inside-out with both the safety and the linebacker dropping back into a zone.  Both corners are giving Decker and Demaryius a significant cushion.  With the verticals concept it is meant to stretch the safeties over the top horizontally and make them choose a receiver, and it is also meant to open things up underneath.

With off coverage, the receivers can choose to break back on a comeback, which we will see DT and  JT do as well.  This is not Cover 2 however with the double team/bracket on JT.  At the snap the outside corners open up their hips in trail technique and the safety to the top of the play covers the deep middle.  This is essentially Cover 3.  With trail technique on Decker, and the safety in the middle out of position from the snap, Manning and Decker read the coverage perfectly and know the deep post will be wide open.  The corner has pretty good position on Decker, but Decker's crisp and precise cut to the middle of the field help him gain about a yard of separation, from there Manning leads him with the ball perfectly.  Notice how the ball is released right when Decker crosses the 30 yardline.

There is playaction but from the snap, the linebackers drop.  With their zone coverage Welker is wide open on the short crosser.  So is DT with the comeback.  Three options, Manning picks the most deadly and unloads a 50-yard bomb through the air.  It hits Decker perfectly in stride for a huge gain.

The safety recognizes it, but he's too late.  Gorgeous from start to finish. 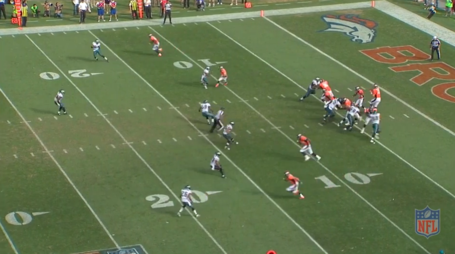 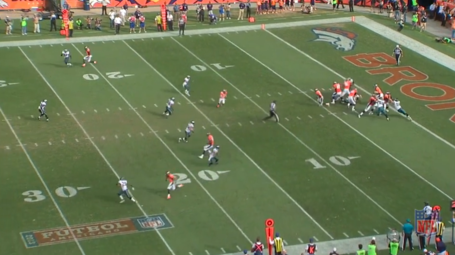 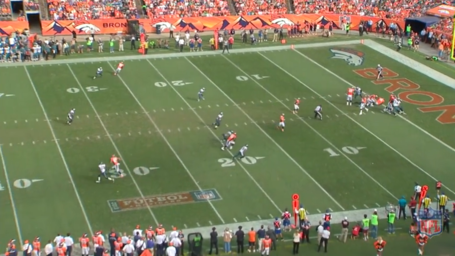 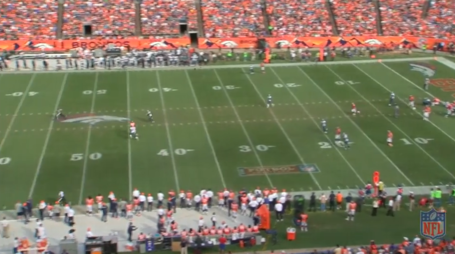 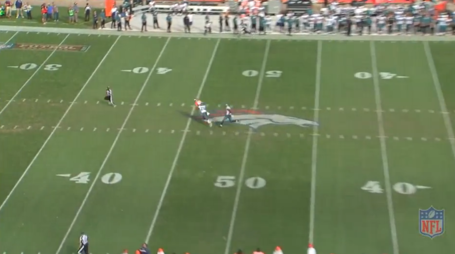 Fantastic play by both Eric Decker and Peyton Manning.  It is scary to think that against such soft coverage, Peyton had three viable options and every one would have probably gained a 1st down.  It is going to take a special secondary to corral all the weapons the Broncos offense possesses.

A Mile High Salute to Decker and Manning!!!

At the request of Mr. Jeremy Bolander, I went ahead and snipped the earlier bomb to Decker that was incomplete due to an overthrow.

Same coverage shell.  Same personnel, same split by the receivers except Julius Thomas is tight to the line.  Same defensive personnel, different wrinkle.  Zone blitz with the corner across from Welker as the OLB is charged for coverage on JT.  Once he reads protection, the OLB drops back to a zone in the left flat.  The Safety on Welker's side now has coverage on Welker because of the CB Blitz.  The LB to that side dropping in a zone effectively creates an inside/out bracket on Welker.

Knowshon is running playaction to the right side and is in perfect position to pick up the corner blitz.

Three man route by the Broncos.  Same sort of off coverage, Cover 3 all the way.  This time Decker uses a little stutter step/hesitation move that smells of a comeback route.  That little stutter step gets the DB to plant his back foot and by the time he realizes it is not a comeback, it's his ass.  Too bad Peyton overthrew him.

Something to think about.  This play set up the later gain because Peyton and the WR's were prepared for the look and coverage shell.  It seems like the Eagles tried to take away one underneath receiving threat by virtue of an inside/out bracket, and tried to keep the big play from happening by having their corners/safety play soft and deep. 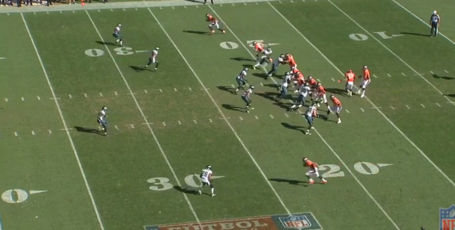 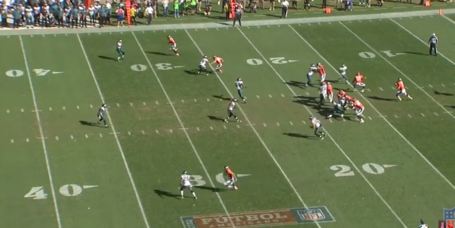 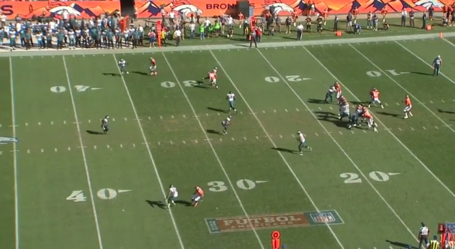 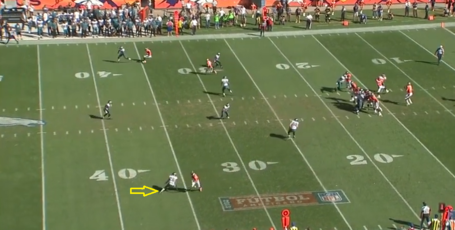