Create a caption for the photo above, and post it in the comments below! It's been a pretty busy season for Denver Broncos kicker Matt Prater, who has attempted—and converted—29 PATs this season, an NFL high. Such is not the case for Jacksonville Jaguars kicker Josh Scobee, who has attempted just four PATs, which is an NFL low among starting kickers.

How does that make Scobee feel? What is he thinking in the photo above? Does he ever get bored? May he be starting to forget how to kick PATs?

YOU DECIDE! Get creative.

We'll peruse the comments and pick a winner for the next week. 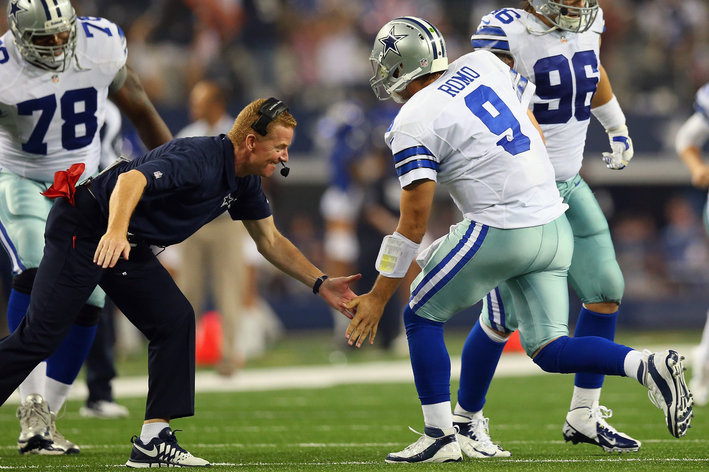 Garrett: "HECK OF A THROW PEYTON!"

Garrett: "YEAH WAY TO GO PEYTON GIVE ME A FIVE!"

(Note: I am impartial when picking the C-a-C winners. It's merely coincidental that Kyle runs this site and was a co-winner in this week's C-a-C contest. /asks Kyle for raise after kissing up.)

Romo: Coach, if I’m gonna come all the way over here for the hand signal, can’t you just tell me the play?

Garrett: Just try it! It works for the other guys. Now get out there-only ten seconds left on the play clock!

Garrett: I know, that was sweet! Gimme some down low.