Despite playing behind an offensive line that struggled most of the game in both phases Moreno made the most of it with 3 touchdowns and 104 and actually lead the team with 7 receptions. He ran tough the whole game, getting hit often and early, often at or behind the line of scrimmage. He also had a huge impact in the blocking game in a game where the offensive line had one of their worst games of the season. This kid can really do it all, which explains why he gets a game ball every week. Oh and something to note, this season Moreno is average 2.6 yards after contact which means that about half of his total yards come after he is hit. - Topher Doll 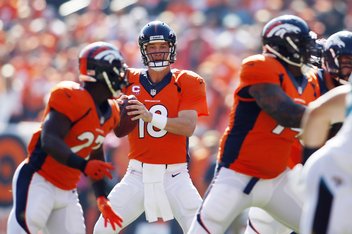 After the offense made a statement with an opening 3rd quarter TD drive, Malik provided the answer on defense. In three successive plays he took over the game with a sack, tackle for loss, and another sack. The beast from the SEC is fast becoming a pass rushing threat on a squad that will only get better with the return of Von Miller. - Bronco Mike

I'd like to officially declare Trevathan 'The Closer,' two weeks in a row he has closed the game out defensively and given the ball back to the offense with an opportunity to win the game. Trevathan has quite the line on the season as well: 41 total tackles on the season, 32 solo, a sack, three interceptions and six passes defensed. Trevathan only continued to get better on Sunday post a 6 tackle line with an interception and a pass defensed. - Ian Henson

In my opinion, right guard Louis Vasquez has been Denver's second most consistent offensive lineman, only behind right tackle Orlando Franklin. So when Franklin went out with a knee injury (fingers crossed he's okay, but no one know for sure right now), Denver's o-line consistency could have potentially flown right out the window. Vasquez moved to right tackle, and Chris Kuper took his long-time spot at right guard. You might have expected some growing pains in Vasquez sliding outside of "the box" and into "the island," as he described it, but instead Vasquez and Kuper performed marvelously. Vasquez even executed the lead block on Knowshon Moreno's third touchdown run that sealed the victory for the Broncos. If Orlando Franklin misses some time, I feel pretty comfortable with Kuper at RG and Vasquez at RT. The Broncos just cannot lose anybody else - there are no more "next men up" to call upon! - Monty

Is there a better special teams player in the NFL right now? I think not. David Bruton had been craving a play call like that for quite some time and man it was nice. It's always great to have a Swiss army knife player like Bruton on the squad. - Mr. East.

Who gets your game ball, Broncos country? Let us know in the poll or comments.