Share All sharing options for: Denver Broncos vs. Jacksonville Jaguars: The Four Horsemen

Even across the board except for Demaryius Thomas who was only targeted four times.

Everyone is within 7 targets and 6 receptions of each other. Welker and Julius Thomas continue to be the touchdown machines.

Every receiver has now dropped below the 100 catch projection threshold. Each is still on pace to break 1000 yards receiving. Three of the Four are on pace for double digit touchdowns. Eric Decker has suffered the most from Wes Welker and Julius Thomas use in the redzone. 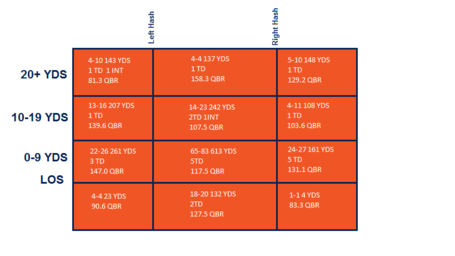 To Blitz or not to Blitz?

Peyton has yet to throw an interception when pressured or blitzed. In fact his QBR is the highest when opposing teams have blitzed him. Bring more rushers and there's a better chance several of the four horsemen have one on ones.

Noticed that Peyton has not been sacked on a blitz either. Speaks volumes to the pass protection up front and the pickups by the backs.

Blitzing is not the answer folks.