Curious about the Colt defense? Look no further!

The Colts utilize a "3-4" front as their base defense

I think of Freeman more as the "Mike" because his leadership role and snap counts, but it is clear to me he is used more in coverage than Angerer or Sheppard. Therefore It would be more appropriate to label him "Jack". That is inconsequential. Next to him in the middle will be a rotation of Pat Angerer and Kelvin Sheppard who seem to rotate in and out.

You will see both safeties play centerfield or play coverage against a TE. 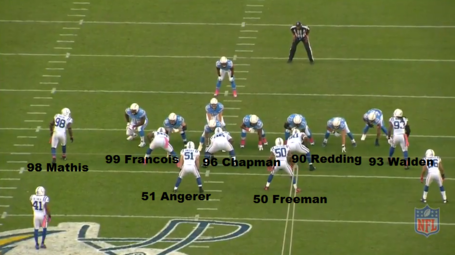 Here Chapman is in for Franklin. But this is a pretty standard set up in their base defense. Though Walden and Mathis can be switched, I've seen Walden take on the strong side more predominantly than Mathis. You will almost always see Redding 2-gap from the 4 tech spot and Francois play the 3-technique to Mathis' side. Here is a shot of the same play/alignment from a different angle: 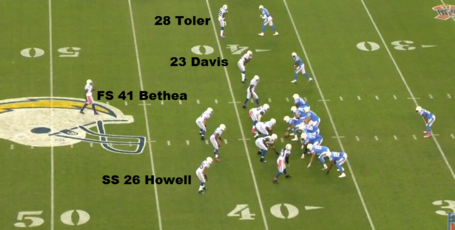 Saw this variation in some obvious running situations, though it could just be a substitutional (yes I just made that word up) anomaly. Me thinks it's legit though given the proximity to the goalline and the heavy two back set. We probably wouldn't see this against our team, but who knows? Think of our nickel "bigs" when we keep the beef at DT up front. Notice Walden on the strongside again. 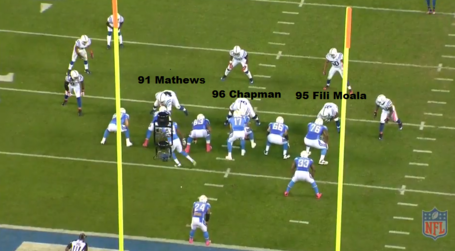 This is likely what we will see the most given our tendency to run a lot of 11 personnel. Sometimes both Waldon and Mathis will play standing up, sometimes Mathis will put his hand in the dirt, at this point it doesn't matter. Walden can jump into coverage but Mathis won't. He's seen 11 coverage snaps all season. Here I highlight the coverage matchups for you. 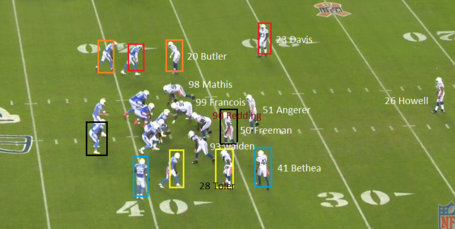 Francois and redding will both kick inside and play DT (1 tech and 3 tech respectively). Bethea is matched up on Gates in this instance with Freeman having coverage on the back. Howell is playing centerfield. This colts team will play a lot of man free. Here you can see the Cover 1 with press very clearly: 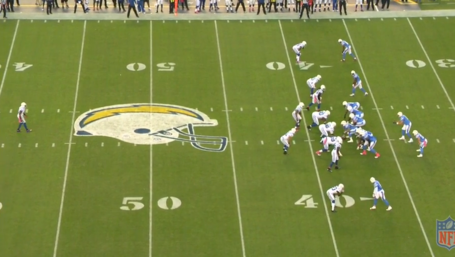 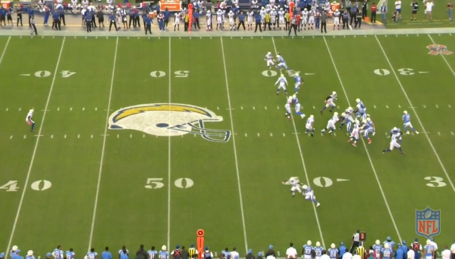 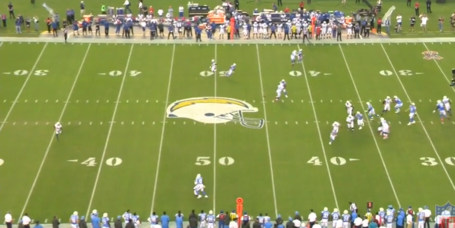 Every once in a while based on the alignment of the offensive receivers, the Colts will bracket with a safety to one side in zone and play man on the other side with a safety over the top. If you're counting, that takes care of three. Still leaves a TE and back with good match ups against linebackers.

The key for our Broncos receivers on the outside will be to successfully get off the jam and gain separation.

All in all, this is a decent preview of what we are likely to see against the Chiefs later on in the season, at least coverage wise.

On the outside, Mathis against LT and whoever we have playing RT will be a miss match in the Colts favor which I will detail in the next few days. Another potential pass rushing mismatch would be Cory Redding as a 3-tech going against either Zane Beadles or Chris Kuper/Louis Vasquez.

In coverage, I will keep watching game footage to bring you some things to look for on the outside. Already though, I see the interesting matchup being Wes Welker against their LB's especially on drag and crossing routes. Julius Thomas against a safety is an interesting prospect so I will give a look at that as well.

A few Random thoughts? Walden was used to check Gates coming off the LOS enough to get me to notice it. Expect a similar tactic against Julius Thomas, that is unless he is used to help support whichever side Mathis is on. There could be some interesting shifting going on in 12 personnel to try and neutralize their defensive tendency to have Walden on the strongside.

Also, if we can take the crowd out of the game, #90 jumped offsides two or three times last game on hard counts.

Look for a breakdown of the Colts offense and Andrew Luck tomorrow.