In the face of a media blitz, Manning audibles

"I don't have any answer for you on that or any comment on any of that," said Peyton Manning, when asked about Colts owner Jim Irsay's comments earlier this week.

Share All sharing options for: In the face of a media blitz, Manning audibles

His opponents were giving him looks he didn't like. So, as he so often does, Peyton Manning audibled. 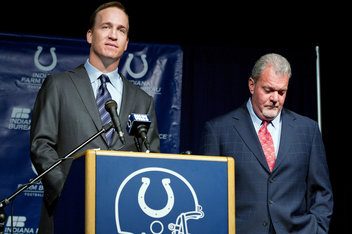 "(Tom) Brady never had consistent numbers, but he has three of these," said Irsay, pointing to his Super Bowl ring.

Earlier in the week, Colts owner Jim Irsay stirred the pot in comments to USA Today. A year and a half after releasing the future Hall of Famer, and days before Manning was to return to Indianapolis as a member of the Denver Broncos, Irsay questioned Manning's success with the Colts because his regular season prowess didn't lead to Super Bowl success. "(Tom) Brady never had consistent numbers, but he has three of these," Irsay said, motioning with his Super Bowl ring. "You make the playoffs 11 times, and you're out in the first round seven out of 11 times. You love to have the Star Wars numbers from Peyton and Marvin (Harrison) and Reggie (Wayne). Mostly, you love this."

Irsay's comments were magnified when Broncos head coach John Fox called them a "cheap shot" during a radio interview Tuesday. Rockies first baseman Todd Helton, a longtime friend of Manning's, echoed Fox's sentiments during the Denver Post's Press Box streaming morning radio show: "I hope he (Manning) steps on their neck and doesn't let up. That’s what I hope for, especially after that idiot, whatever you call him, spouting off his mouth."

The stage was set; the players had their ammunition. When Manning approached the Broncos press conference podium Wednesday, he might as well have been lining up to take a snap against athletes trained and paid to take him down. The opposition was just as rabid.

The blitz was ready. But Manning wouldn't have any of it.

"I don't have any answer for you on that or any comment on any of that," said Manning.

And that was it.

Instead, Manning talked about the Broncos' preparation for their opponent Sunday. How the Colts were a vastly different team than the organization he played for - "a team that—it may sound strange—that is unfamiliar," Manning said. "It's an unfamiliar opponent, a lot of guys that I've never played against and certainly a new scheme."

Manning said he wouldn't know how it felt to return to Indianapolis Sunday, and that those feelings aren't his focus right now. He's preparing to play a football game with his teammates on Sunday night.

"But midseason of your 16th year when you’re playing a really good team, I think, on the road, it’s hard to get too reflective," Manning said.

There's no time to reflect when both players and media are bringing the blitz.