If you are in the red, you'll get to see Von Miller's 2013 debut on NBC this weekend. Oh, yeah, that one quarterback is also returning to Indianapolis or something.

The Denver Broncos (6-0) will travel on the road to on the Indianapolis Colts (4-2) on Sunday Night Football this weekend. Here's a handy-dandy broadcast map to let you know if the game will be televised in your local area.

This week's game will be nationally televised, so if you have NBC, you'll get the game.

No Drama from Manning 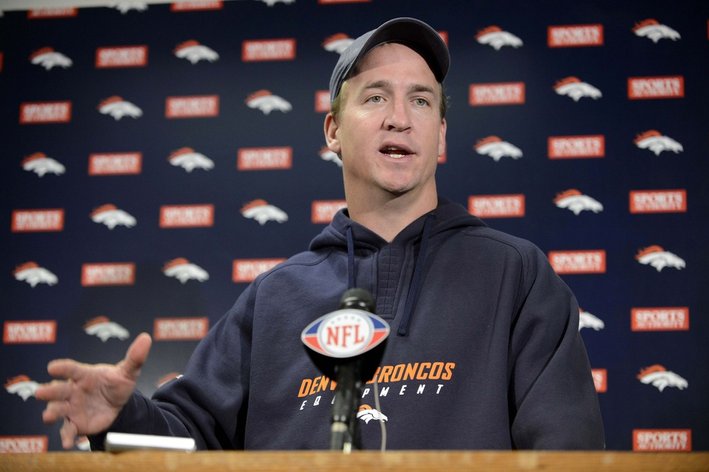 "I don't have any answer for you on that or any comment on any of that," said Peyton Manning, when asked about Colts owner Jim Irsay's comments earlier this week.

The game will also be streamed LIVE on NBCSports.com. Just follow their "Watch Live Now" link on game day.

With this week's contest marking quarterback Peyton Manning's first return to Indianapolis with another team, there have been no shortages of storylines (we're glaring looking at you, Jim Irsay). Peyton has kept his cool, however, playing down the hype and drama leading up to game day.

Perhaps slightly overlooked in all of the Manning hoopla is the fact that Von Miller will be returning to the field this week.

In August, the Pro Bowl linebacker was suspended for six games by the NFL for violating the league's substance abuse program. Miller has since served his time in football prison and apologized to the organization and fans following his suspension lift, noting he has matured over the last six weeks.

The Broncos didn't necessarily "miss" Miller during his suspension—they managed to go 6-0 without him, leading the league in scoring along the way. Denver's secondary has struggled at times this season, however, and that has often been due in part to a lack of a pass rush. That is something Miller—who wastes no time getting to quarterbacks—will help address starting Sunday.

After totaling 18.5 sacks in 2012, Miller bulked up and lost body fat during his six-game suspension in 2013, making him an even scarier foe for opposing quarterbacks. Miller told USA Today that he now feels "a lot stronger, quicker and faster" coming off his suspension.

While Miller sat out, Shaun Phillips led the pass rush with 5.5 sacks. Fellow defensive end Robert Ayers was close behind with 4.5 sacks and rising rush specialist Malik Jackson has totaled 3.5.

With Miller returning, the Broncos are expected to plug him in at Sam linebacker in their base defense (pulling Nate Irving and leaving Wesley Woodyard at Mike and Danny Trevathan at Will). In nickel sets, Miller will move to defensive end.

To put it in more simple terms, Miller will be getting back to wreaking havoc this week.

The media would have led you to believe this game was about two quarterbacks . . . far from it. This game is about one quarterback's return to his former city and a linebacker's return to the playing field.

As for that other quarterback, well, Von's coming for him.