Happy gameday eve folks! Here to bring you a thorough breakdown of the Indianapolis Colt Offense ahead of tomorrow night's matchup.

Strong numbers across the board.  The area in which the Colts offense has struggled a bit is through the air.  It is more indicative of the kind of balance they have attempted to accomplish to date.  No one is going to accuse Andrew Luck of not being a capable quarterback.  So much of what they do in the passing game right now goes through the running game which will be yet another test for the Denver Broncos #1 rushing defense.

They may be a middle of the pack team in yards, but those yards have counted in the points column.  This Colt offense is efficient in converting 3rd downs and doesn't give the ball away much.  Through six games the offense has committed 5 turnovers. 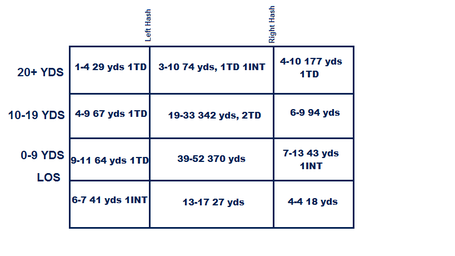 His most productive areas passing the ball are the 0-9 range both left and middle, and the 10-19 range middle.  Though he has not connected much long, down the right he is averaging 44 yards per completion.

Pressure vs. No Pressure

While Luck is passing the ball well when blitzed, he's also been brought down 10 times that way.  The key here seems to be to get pressure with the front 4 without blitzing, which is something Broncos fans have debated and agonized over in the absence of Von Miller.  Hopefully our front is now capable of getting quick, consistent pressure with the front 4 with Von back in the fold.

Neither of these guys are imposing runners.  Though Brown has proven a more effective runner albeit in limited action, they are going to feed the ball to Richardson after giving up a first round pick to get him.  The Colts have been effective in the running game more due to volume than consistency.

(#87) Reggie Wayne has been targeted all over the field.  The only two areas he's yet to receive a target is deep left and short right.  he has done most of his damage in the middle of the field catching 16 balls on 27 targets for 252 yards and 1 TD.

This team probably mixes up their formations/personnel groupings more than any team the Broncos have seen to this point.  In 11 personnel, sometimes they will group DHB and Wayne together with Hilton split wide to the other side, sometimes they will put Hilton and Wayne on the same side with Hilton in the slot, sometimes they will take Fleener out of the game and play a two back set with three wide receivers. Near the goal line, I have seen them flex their back out wide and he'll run a hesitation move against a linebacker.  Good thing for us it's Richardson who isn't exactly lighting the field on fire with his speed.

With some of their heavier personnel, they will bring an extra offensive linemen in the game and run an unbalanced line with two backs, 2 TE's, and 1 WR. Here are some visuals of some of the things I saw last game: 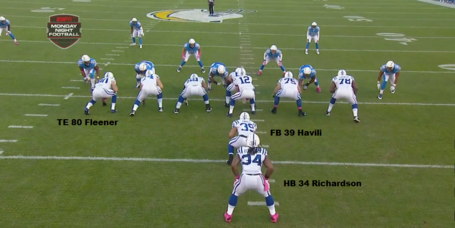 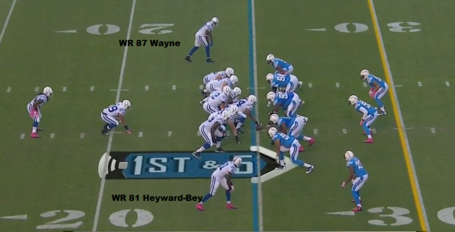 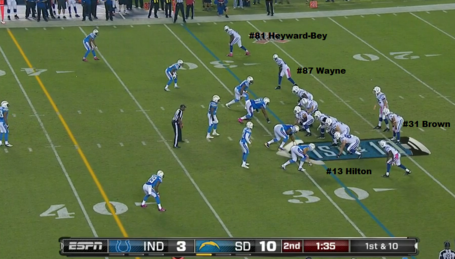 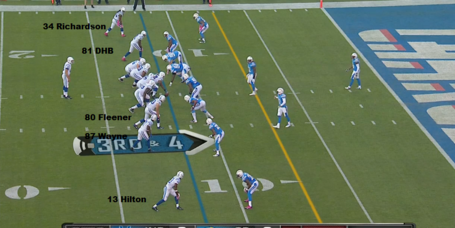 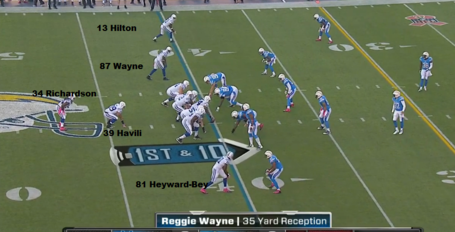 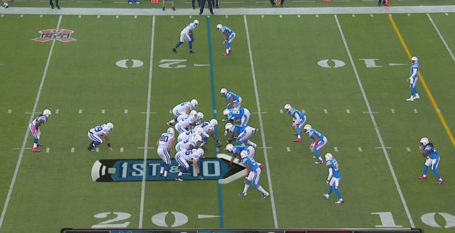 Luck is a capable quarterback.  He notices things presnap that higher level thinkers do and he exploits them.  He'll be paying attention to leverage and technique from the cornerbacks. They are a capable offense that can move the ball and will lean on the running game to open up some playaction opportunities.  Luck is smart with the ball, he'll throw it away or scramble when it's not there.  When pressured, he has the legs to get himself out of trouble and extend plays.

Skill position wise, both Bey and Hilton have speed to burn.  Hilton will be a formidable matchup for the Chris Harris when he lines up in the slot.  Fleener is a decent target but is wildly inconsistent as a receiver.  Reggie Wayne is still one of the best in the game.

If they had a more potent running game, this team would give us some issues.  Fortunately for the Broncos front 7, Richardson isn't going to instill the fear in anyone.  He may be a "tough" runner, but he has no 2nd gear and I still see some big question marks with his vision.  Our defense should have no issues bottling him up.

We shut down this running game and it's all on Luck to keep up with the best in the game.  I don't see that happening at this point in his career.