Pro Bowl Voting is Now Open; Should Chris Harris, Robert Ayers be on the Ballot?

Fan voting for the 2014 Pro Bowl is now open! But two of Denver's key defenders are not on the ballot. Should they be?

Share All sharing options for: Pro Bowl Voting is Now Open; Should Chris Harris, Robert Ayers be on the Ballot?

Fan voting for the 2014 Pro Bowl began on Sunday. The league will be debuting a new type of All-Star game this February, featuring non-conference teams (players of both the AFC and NFC will be mixed together).

The new setup makes for a strange looking ballot, but that won't stop us from voting for our favorite Denver Broncos. 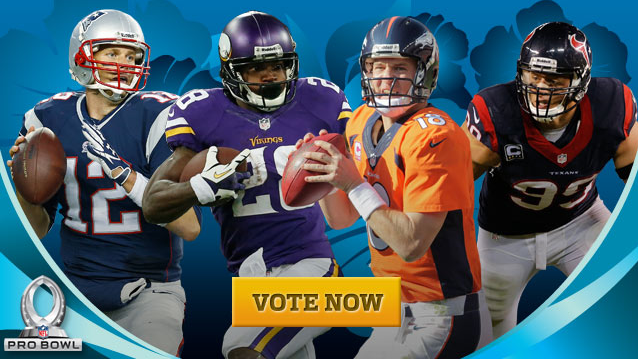 Voting for the 2014 Pro Bowl is underway. Cast your ballot early and often!

The folks at ProFootballFocus.com have created a voting "cheat sheet" which includes five Broncos (there are some surprises and snubs) and there are 27 Broncos on the official ballot, including kicker Matt Prater, punter Britton Colquitt, returner Trindon Holliday and special teams ace David Bruton. There are also however, two notable absences on the ballot.

Defensive end Robert Ayers is currently second on the team with 4.5 sacks through seven games (which is already a career high for him in a season) and has been a key contributor on Denver's defense this season. Because Derek Wolfe and Shaun Phillips are the team's two "starting" defensive ends, however, Ayers is not on the ballot.

Wolfe has notched seven tackles and just one sack this season, producing lower totals than Ayers despite getting more snaps. Without getting into the details of whether or not Wolfe may be doing exactly what the Broncos are asking while Ayers is a role player designed to rack up sacks, it is safe to say that Ayers' numbers have been more impressive through the first half of the season.

Yet Ayers is not on the ballot.

That is not the worst of it, though. An even greater crime was committed on the ballot.

The fact that @ChrisHarrisJr is not on the Pro Bowl ballot seems like an outrage to me. NFL needs to change ballot rules for teams.

Cornerback Chris Harris Jr. not being on the roster is absurd.

Harris is the top slot cornerback in the NFL and the Broncos used three cornerbacks on 64 percent of their defensive snaps last season as they combat pass-happy NFL offenses. Though Denver's "base" defense is technically a 4-3-4, they use a 4-2-5 package more often with three cornerbacks in the secondary.

The entire NFL is shifting towards nickel-heavy defensive looks, which is why a player like Harris is more notable than say San Diego Chargers middle linebacker Manti Te'o (thanks to the Denver Post's Mark Kiszla for the comparison). In today's NFL, cornerbacks are more important than middle linebackers (in most cases).

The fact that Harris is the third cornerback on Denver's depth chart is also nothing to scoff at—he is behind two Pro Bowlers and his job is not to line up on the outside, his responsibility is the slot receiver. So far this season, Harris has covered players including:

In Week 4, Philadelphia Eagles quarterback Michael Vick didn't target Harris once, which is the ultimate complement a quarterback can pay to a defensive back. Harris may not be a "starter" in Denver's "base 4-3" defense, but he plays—and impacts—every game as the team's slot cornerback.

Harris should be on the Pro Bowl ballot, but it's not necessarily the Broncos' fault that he is not. The NFL has funky rules that teams must abide by when submitting their Pro Bowl ballot rosters—you guessed it: only "starters."

Such a rule is the reason why New York Giants defensive end Jason Pierre-Paul wasn't on the ballot in 2011 during his 16.5-sack season. Pierre-Paul, like Ayers, was a rush specialist that, like Harris, played a huge role on defense each week but was not on the ballot because he was not a starter in New York's base defense.

This is something that must be addressed by the NFL. Team's should not be restricted to list only base starters on the ballot (within reason). There's not a team in the league that doesn't use nickel packages frequently—the ballot should reflect that.