So here's what's going to happen from now on. Four times a week you'll get one of a kind breakdowns of the Denver Bronco defense. Consider these posts an archive/encyclopedia for what the Broncos are doing defensively. I will include front 7 alignment along with techniques for each defensive alignment on every play. Why four posts? One for each quarter of the previous game. It portions out the work for me and gives us a chance to process the information in smaller parcels.

How do I figure out offensive personnel?

It is just shorthand folks.

If you have 5 DB in the game, that defense is called "nickel"

If you have 6 DB in the game, that defense is called "dime"

Both outside players (Phillips and Miller) played from a 2-point stance. That's it. Just using a very simple physical tell in order to classify it. You could still think of it as 5-2 or under if you'd like

I could, and contemplated it. But it's still nickel defense. Rather than try and throw out the notion that it is something completely different, I'd rather call it what it is. The biggest difference is that both outside players played every snap in this defense standing up. Just know that going forward. Will be interesting to see how they treated Robert Ayers later on (hand in dirt or standing up), because if his hand is in the dirt, you need to know they are treating Miller and Phillips more like OLB's.

Techniques, what are they?

Techniques are a system in which defensive linemen are labeled according to how they line up across from their offensive counter parts. There are several different systems that folks can use, I use this one:

These are all outside players (OLB or DE's). But how far outside they like to line up will tell you what they are. Sometimes players are there to give you definitive proof, other times you have to eyeball it. Bronco Mike does not use 6 tech. Other than that I do my best to approximate distances.

Each play is numbered, identified by down and distance, broken down into offensive personnel the Broncos were facing, and finally what kind of defense the Broncos put out there. 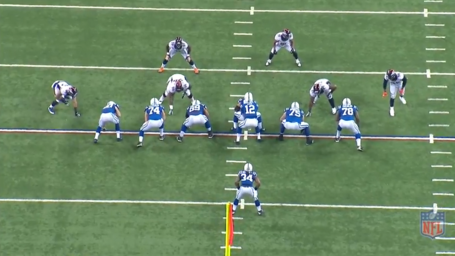 Three linemen, three linebackers. Von is a LB rushing from the 7 tech above (outside of #78). I don't list him in the chart below with techniques because it is essentially a 3-man line. You could call it 4-2-5, but again for the purposes of categorizing I will just stick with the simple "hand in the dirt or standing up rule."

Now how to read these charts....the RDE always starts first, so you basically read the defense with the view above. 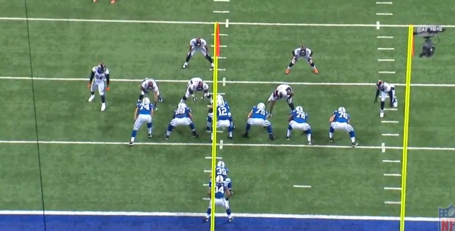 Both Phillips and Von are standing on the outside 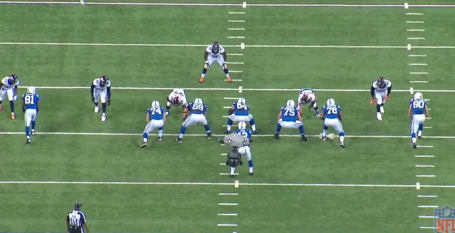 I will tally everyones numbers in each front at the very end. Each player will have a snap/technique/front chart. How's that for thorough?